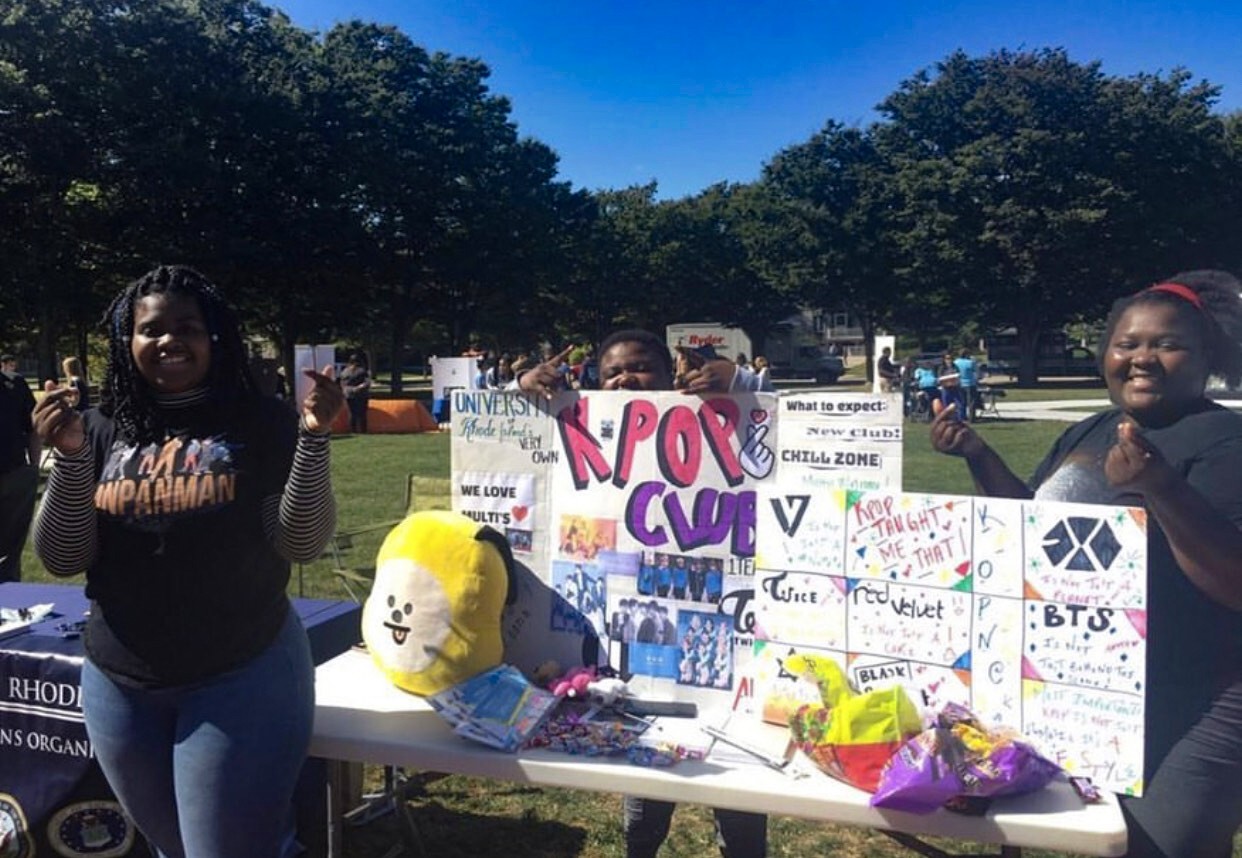 Students from K-pop club set up a booth on the quad to get more students to participate. Photo contributed by K-pop club.

The University of Rhode Island has over 180 organizations students can join to have fun and express their interests. The amount of clubs is ever-expanding, and in the 2019-20 academic there’s one club on campus the school hasn’t seen in its 127-year history: Kpoppin’ at URI, otherwise known as the K-pop club.

K-pop, according to member Nethra Prasanna, is an umbrella term for any music that is in the Korean language. R&B, hip-hop and indie are all types of music that fit under the realm of what K-pop is. Dramas also fit under the definition.

The group meets in Swan Hall in Room 204 every Tuesday and Thursday from 5:30 p.m.-7 p.m. In these meetings, they sit down and discuss different types of music, singers and performances. They also talk about aspects of the industry and different parts of Korean culture.

After becoming frustrated about the culture of discussing K-pop on various social media platforms, the group agreed that they would not belittle each other’s thoughts. As a result, the group said they aren’t afraid to express their opinions or personal beliefs.

Sophomore Amy Angervil wanted to start the club during the spring semester of last year after seeing other students walk around campus in K-pop merchandise. None of her friends and family were interested in the genre, and after realizing some of the challenges of starting a club midway through the school year, she decided to launch the club this year. Angervil said she sent some emails around, and on First Night she found herself being in charge of the club’s booth in search of the inaugural members.

The group hopes to be able to fund raise enough money to go to South Korea in the spring of 2021. One idea that Angervil had in order to fundraise was to sell cake pops outside of the Memorial Union.

While dazzling performances and sometimes outrageous costumes are part of what makes the style of music so unique, club members said that’s not why they are in love with it. Club Treasurer Nethra Prasanna wanted to join the group because she wanted to be around like-minded people who treat K-pop the same way she does.

“In middle school and high school I felt like there was this weird stigma around it,” said Prasanna. “I wanted people that I could listen to similar types of music with in an environment that I wouldn’t feel judged.”

Club member Janasia Chavis said she is inspired by how hard K-pop artists work to be successful.

“I am into the performances and the dedication people show to their art is just really inspiring,” said Chavis. “It has really helped me come to college and pursue my dreams. If these people can come from nowhere and start from the bottom and work their way up, why can’t I?”

Prasanna even taught herself how to read and write Korean as a result of being a fan of the genre. While the music is in another language, it has not deterred members of the group from enjoying what they hear.

“It’s in another language, but you can connect to it,” said Chavis. “Why do you need to understand a song to jam out to it? A banger is a banger.”

The club can be found be found on Instagram @kpoppinuri or email urikpopclub@gmail.com.