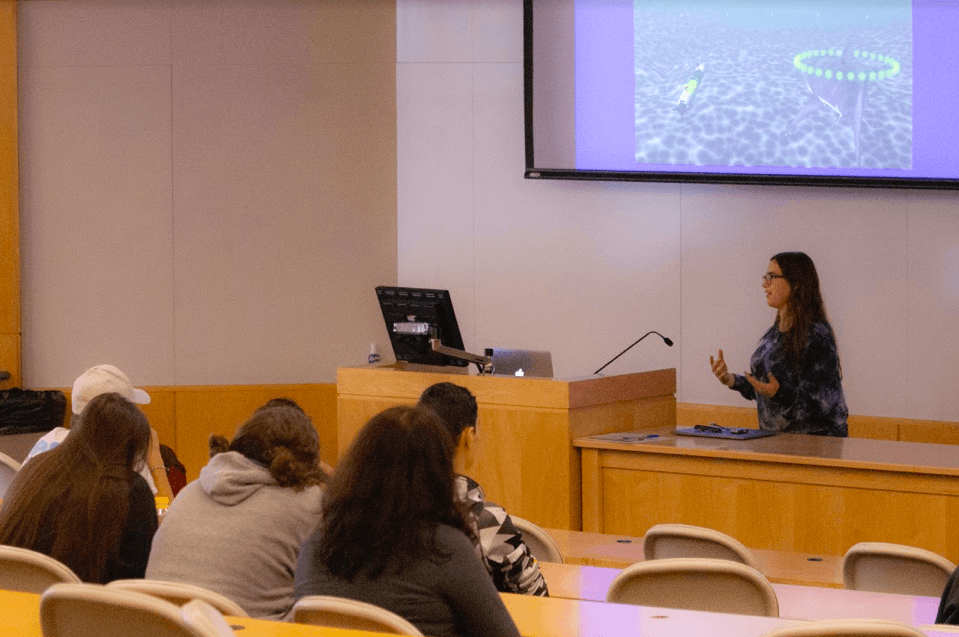 The third annual “I Know What You Did Last Summer” lecture was held this past Friday afternoon, where a total of six University of Rhode Island marine biology students discussed their research-focused summer internships to their peers.

Fredsbo focused her research on footage of Juno in order to identify specific interactions between male whales. “One thing that I was looking at more specifically was the way that the male belugas reacted to the other male belugas,” said Fredsbo.

The next presenter, continuing-education marine biology student A.J. Ferraro, spent his summer focusing on how seal and sea lion whiskers can detect submarines. Ferraro described his research as a study of biological technologies that he explored.

“How do you locate an extremely quiet submarine in a noisy environment such as the ocean using marine biology?” said Ferraro. “When you are in a body of water, fish create movement and there is a depression. Seals can sense this with their whiskers.”

“We read all these journal articles and tried to figure out variation within the different subpopulations,” said Kenyon. “Some of the characteristics were their size at birth, size at maturity, age at maturity and range between sexes.”

“What is the effect of Louisiana Sweet Crude Oil sheen toxicity on the survival of larval oysters?” said Zavell. “How does the previous oil and UV exposure impact survivability when you are in clean sea water? And what does the subsequent salinity and temperature effect have on each shock increase previous oil toxicity?”

The final presentation came from Karla Haiat, marine biology and ocean engineering double major. worked at the Remus Shark Cam Lab within the Woods Hole Oceanographic Institute, where she developed a bio-logging camera tag for seals and turtles.

“The seals swim together which creates some problems with having a robot that follows the tag because the robot doesn’t have any idea of what the other things around the thing it is following is so it can definitely hit the other seal,” said Haiat. “So what I did is create a biologging tag that doesn’t necessarily need to be connected to this vehicle.”