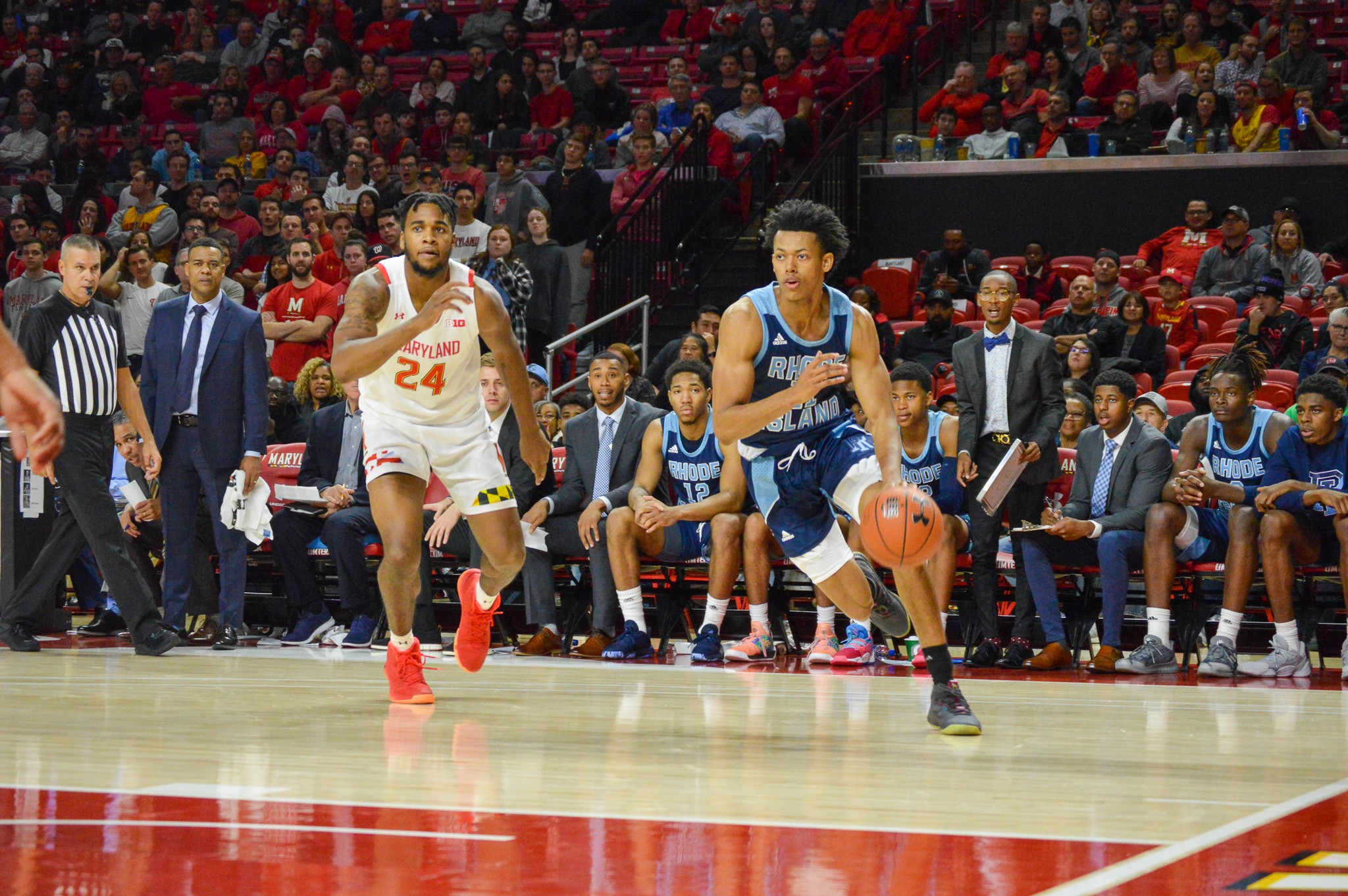 Rhode Island basketball simultaneously showed both their ceiling and floor Saturday night after taking on the No. 7 ranked Maryland Terrapins.

URI started the game playing the quintessential brand of basketball that was implemented by Dan Hurley, and which has been continued under second year Head Coach David Cox. The Rams forced 14 turnovers in the first half against a Maryland offense that’s used to operating at the highest level of efficiency.

This game featured a physical brand of basketball you don’t always see in the modern age of pace and space basketball. The big man matchup itself was a war of attrition the entire evening between NBA prospect Jalen Smith of Maryland, and physical presence Cyril Langevine of URI. Langevine finished with six points and 17 rebounds, while his competitor on the low block gave a strong performance of a double-double to the tune of 19 points and 11 rebounds.

“He’s an absolute warrior,” said Head Coach David Cox. “He does all the dirty work. He’s not afraid at all to get physical. I think Jalen’s length caused Cyril some issues on the offensive end but it was a real battle down there. I’m proud of him.”

Offensively the Rams didn’t have enough firepower for what would have been their first regular season victory over an AP top 10 team since a victory over Providence College in 1966. Rhody had some serious shooting droughts, including at one point going a full six minutes without scoring. Rhode Island lacked the firepower necessary to go into the Xfinity Center and come out with what would have been a major upset early on in the college basketball season.

Rhody started the game on fire going 12-25 from the floor, but shot only 8-42 the rest of the game. The Terrapins switching to a debilitating 1-3-1 zone halfway through the first half was the root of the Rhode Island offensive struggles.

Foul trouble hampered the Rams early and often in College Park. Both Jermaine Harris and Tyrese Martin found themselves in early trouble in both the first and second halves, subsequently leading them to play just 22 minutes apiece.

“It hurt us tremendously,” said Cox. “You saw [Martin] start to the game. He was locked in. He’s a big part of our offensive game plan and when we don’t have him on the floor for extended minutes it causes us some issues.”

Rhode Island showed flashes of what should still make them a force in the Atlantic 10 this season. They have the physical presence necessary to hang with most teams in the country, if they can figure out their woes offensively the Rams have the chops to get out of non-conference with a few season defining victories.

“Once they went into a zone our offense took a dive,” said Cox. “It took an absolute nosedive. We couldn’t get back into a rhythm.”

A date with Alabama looms on the horizon, as URI still has ample opportunity to pick up season defining wins. LSU, West Virginia and Providence all remain on the docket as well in the next month.

The talent is there for the Rams, the continuity still remains at large however, with freshman Jacob Toppin, Gregory Hammond and Mekhi Long still getting their feet wet. For Rhode Island to be successful and attain their goals of the 2019-2020 season, the Rams will need to execute offensively against any defense that is thrown at them.

All photos taken by Ian Weiner.