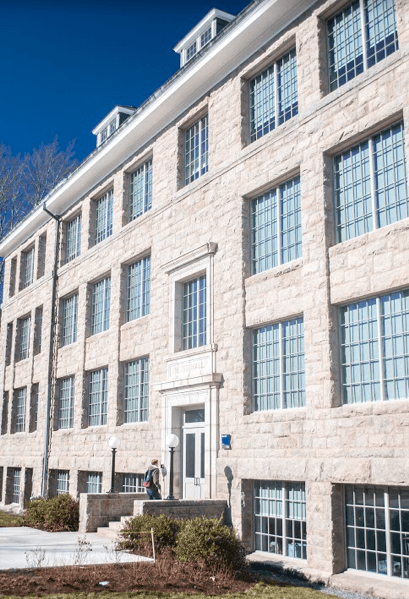 The University of Rhode Island’s historic Bliss Hall is officially renovated, expanded and open for students and staff after undergoing major construction that began in 2018.

The renovation gave the 91-year-building’s interior a much-needed facelift that includes modern facilities. It also added a 15,000 square-foot expansion to the building.

According to Paul DePace, director of URI’s Capital Projects, the team received special permission from the state department to use the same project team as the one that built the Fascitelli Center for Advanced Engineering. Working with this same team gave Capitol Projects the ability to add an expansion to the back side of Bliss Hall.

“One of the most important aspects of the building’s renovation for DePace, a URI alum from the class of 1966 who has seen Bliss Hall through many time periods and even studied there as an engineering student, was making Bliss Hall conform to Americans with Disabilities (ADA) standards.

“One important thing about the Bliss project is that it’s a renovation project and the original building did not conform to ADA standards for access,” DePace said. “That was one of the important elements that we brought to the project and to the renovation. We found the easiest way to do that was with the addition, rather than working it into the existing building. Making the buildings ADA compliant has been a personal focus of mine.”

DePace said that he and his team wrote a series of grant proposals to the Governor’s Commission on Disability to gain additional funding to make Bliss Hall ADA compliant, and they received a total of $631,267.

According to DePace and Steinbrecher, right before the Bliss Hall renovations and additions began, the quad and the buildings on the quad were accepted into the National Register of Historic Places. Therefore, they had to follow specific guidelines, such as keeping the exterior stone walls from when it was first built in 1928. The team also had to design the lattice-structured windows to look like the originals throughout the reconstruction process and addition.

Steinbrecher said that the design of Bliss Hall began in June of 2017 and was completed in the summer of 2018, and construction began in May 2018, after the spring semester ended.

“We emptied the building in May of 2018 after the spring semester concluded,” said Steinbrecher. “The demolition aspect of things took the rest of the summer, so we probably finished with demolition at the end of August.”

According to Steinbrecher, Bliss Hall was stripped out to the existing walls, leaving the team with a shell of a building.

“When we finished a demolition, we would start behind it with new interior walls and framing so that happened in conjunction with the new construction and demolition,” Steinbrecher said.

The majority of the funding for Bliss Hall’s renovation and addition came from a general obligation bond, the second bond approved by the state of Rhode Island to support URI’s College of Engineering. The bond also helped finish the companion piece to the new The Fascitelli Center for Advanced Engineering.

Adam Bouchard, a third-year student majoring in electrical engineering, said that he has three classes in Bliss Hall and has been enjoying the learning environment it has provided him with.

“It’s kind of deceiving because it looks like they added that new addition to the back, but the whole interior is redone so it has the modern look all the way through, kind of like the new engineering building, even though the front of it is the brick facade,” Bouchard said. “The rooms are all really nice though and I love all the sunlight that streams inside, definitely boosts energy during early classes.”