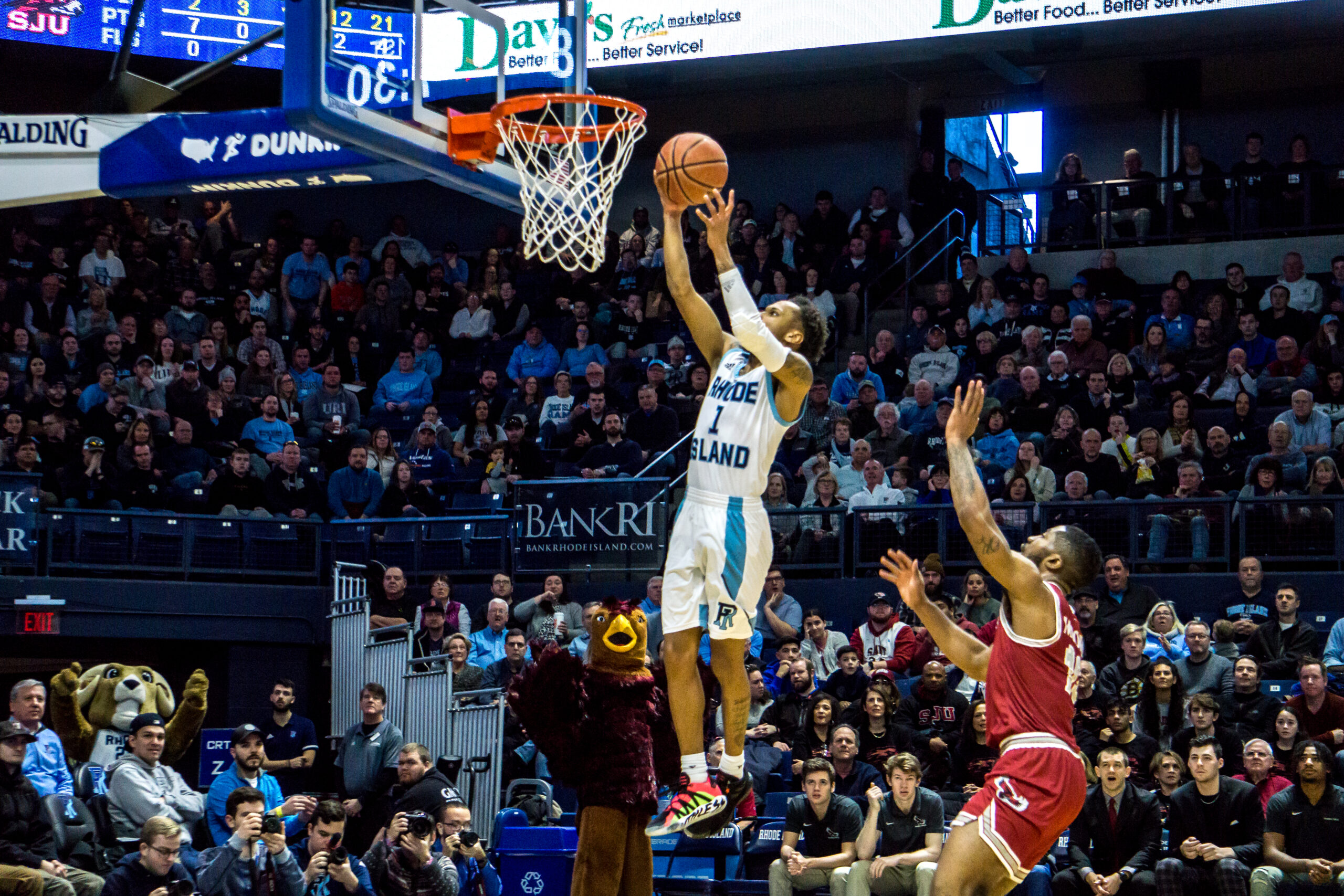 Photos by Autumn Walters.:The Rams raced by Saint Joe’s off the back of plays from both Jeff Dowtin and Fatts Russell

We have to wait an extra day this year, but March is just around the corner. A month when the first spring flowers bloom and the rain is aplenty, for sports fans and bracket-makers alike it only means one thing: Madness.

Unlike last year’s rebuilding season, the University of Rhode Island has a strong chance to return to the NCAA tournament. In the last two years of the Dan Hurley era, the Rams made it to the Round of 32 before falling to Oregon and Duke.

Why the Rams stand a great chance to return to the Big Dance can be contributed to two things: a difficult non-conference schedule and wins.

Before the ball tipped off in conference play URI had played the 14th strongest non conference schedule. Playing the likes of Maryland and West Virginia away from the Ryan Center exposed the team to high-caliber opponents, while big wins against Alabama and Providence gave Rhody confidence they could beat good teams.

A two-game skid to begin the new year (including an ugly loss to Brown) had the alarm bells ringing, but the Rams have since won 11 of their last 12 games to set the stage for the end of the season. Overall, URI is 19-6 and second in the A-10.

Last season the NCAA introduced a metric called NET Rankings that takes from a variety of metrics like strength of schedule and quality of wins to rank all the teams in the country. Depending on where an opponent is in the rankings or where the game is played, wins can be categorized in different quads. Quad 1 wins are the most impressie; Quad 4 the least.

What more do they need to do? A win against Dayton on Senior Day would be nice. The Flyers are the class of the conference and have the second best offense in the country according to KenPom rankings. Being the team that would give Obi Toppin and crew their first loss of 2020 would also look good from a narrative perspective. It isn’t a must-win, but if the Rams want to improve their projected seeding of the 9 or 10 range, a victory would go a long way.

Most importantly, they can’t afford to lose their other games. Losses away to Fordham and UMass would be disastrous, while a win at Davidson has the potential to be a Quad 1 win.

It’s also worth mentioning the ability to get valuable wins in Brooklyn. As of writing, beating anyone of the top seeds in the tournament would register as at least a Quad 2 win. Dayton and Richmond would be Quad 1 wins if the Rams were able to defeat them.

Rhody’s NET ranking of 32 as of Sunday afternoon also leaves the team in a great spot. The last four teams to make the tournament last season had an average ranking of 59.75. That being said, NC State was ranked 33rd last season but missed the tournament as a result of their poor Quad 1 record (3-9).

One thing to be cautious of is the spin-cycle that is this college basketball season. Anybody can beat anybody, and teams on the bubble from conference like the Big 10 or the SEC have plenty of chances to get Quad 1 or 2 victories at the end of the season. URI has to make their opportunities count, otherwise their palms might be a little more sweaty come Selection Sunday on March 15.