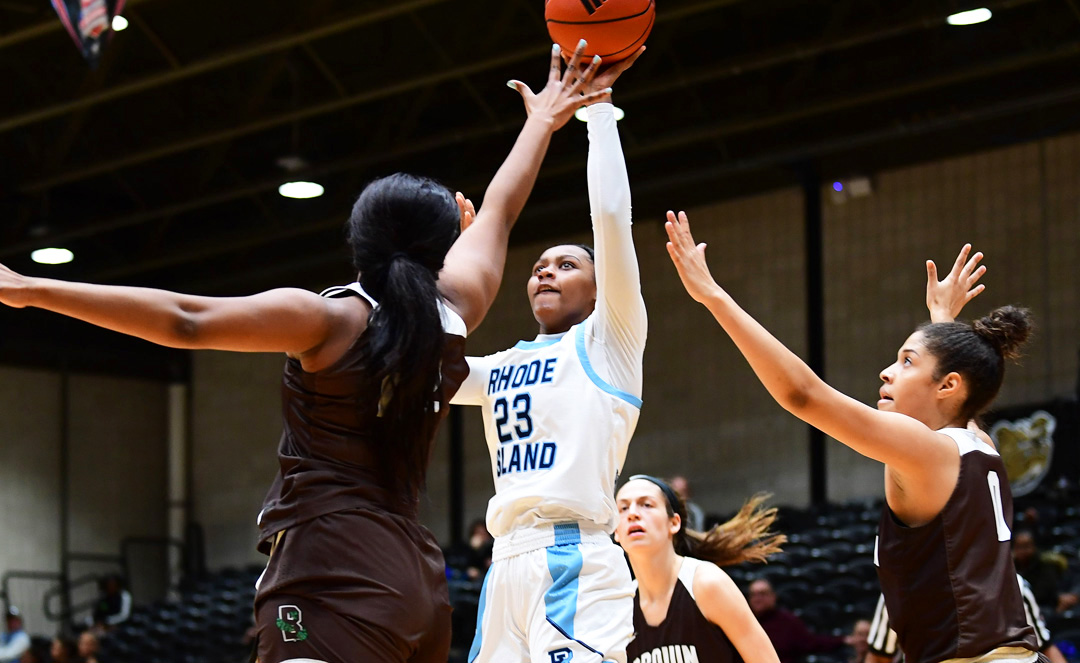 It feels like the Rams have been playing postseason basketball the past few weeks, and with good reason. Coming into their matchup this past Saturday against the La Salle Explorers, the Rams were tied with Richmond for the eighth spot in the conference standings. The eighth spot would give the Rams their first home conference tournament game in program history.

It was also senior day in Kingston for the women’s basketball team. The Rams honored seniors Nicole Jorgensen, Davida Dale and Meghan Oberg during their pregame festivities.
“I was really pleased with all three of them,” Head Coach Tammi Reiss said about her three seniors. “Starting with Meg, she’s a great six man and usually gives us great rebounding and high low passing. Davida has really taken over the point guard position and I’ve asked a lot of out of this poor kid. She has to defend the other team’s best guard and run the point for 40 minutes. Nicole has been really solid for us. She’s developed a low-post presence that people have to gameplan for.”

The Rams and the Explorers played an even game in the first half. Davida Dale recorded a double-double before halftime, scoring 11 points and grabbing 10 rebounds, giving Rhody a two-point lead heading into the locker room.

Dale’s fantastic day would be dampered by an excellent second half effort by La Salle. The Rams went cold in the third period and could never recover. The Explorers would outscore the Rams 29-15 in the second half, including a 12-3 run in the beginning of the third quarter and hold Dale to just four points to leave Kingston with a 54-42 victory.

Coach Reiss talked postgame about how disappointed she was with her team’s effort.

For the Rams, they were led by Dale, who finished the game with 15 points and a career-high 16 rebounds. Dale was followed by Jorgensen, who finished with 14 points of her own.

Looking to bounce back and move back to the eighth spot in the conference, the Rams headed down to Washington D.C. for an evening match against the George Washington Colonials.

The Rams went into the fourth quarter within striking distance of winning the game. Down six at the start of the final period, the Rams went cold, shooting 1-of-7 from the field with three turnovers. This allowed the Colonials to go on a 13-2 run to close the game and come out with a 73-56 victory.

For George Washington, Kayla Mokwuah led the way with 18 points off the bench. She was followed by Alexandra Maund, who finished 16 points and Tori Hyduke, who finished with 12 points.

The loss to the Colonials makes it three in a row for the Rams. The loss against GW also put the Rams out of contention for a home tournament game in the first round of the Atlantic-10 Tournament.

The Rams return to action this Saturday for their final game of the season against the UMass Minutewomen. Tip-off is set for 12 p.m.