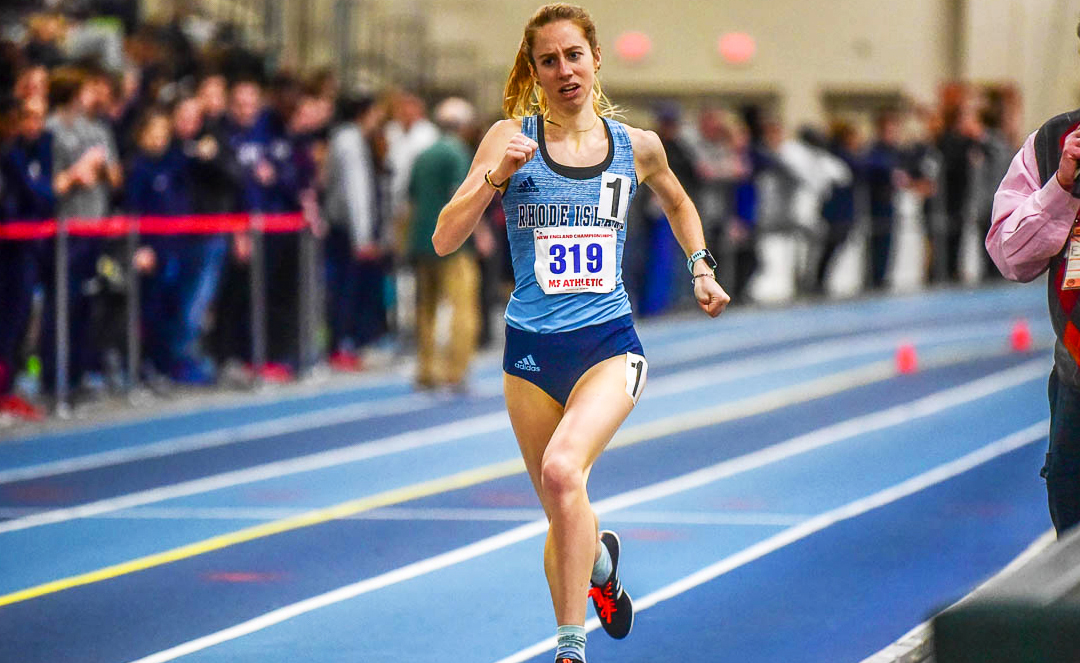 to claim the top five spots in the weight throw. Sophomore Noelya Delacruz won the event with

the 800 meter finals when sophomore Rebecca Durham placed first with a time of two minutes,

24.09 seconds. Not far behind her was senior Katie McNulty who finished second with a time of

Rhody had a total of five runners finish in the top five of this event. Sophomore Jackie

Peschko finished fourth with a time of two minutes, 30.55 seconds and sophomore Sabrina Charron finished behind her in fifth place with a time of two minutes, 33 seconds. The Rams also had success in the high jump finals when they were able to claim the top two spots. Sophomore Sara James finished in first when she earned a mark of 1.58 meters. Behind her in second place was fellow Ram, sophomore Bolu Taiwo who also finished with a mark of 1.58 meters.

The trend of claiming the top spots continued for Rhody as they did the same in the long jump finals. Sophomore Xiana Twombly was able to finish first with a mark of 5.50 meters. James was able to earn another top three finish in this event when she finished second with a mark of 4.91 meters. Over on the Men’s side of things, Rhody had six athletes take first place in their respective events. The Rams had three runners finish in the top four of the 60 meter finals. Freshman La’Rue Martin won the event with a time of 6.97 seconds. Senior Harold Corniel finished in third with a time of 7.20 seconds while freshman Ryan Curtis finished in fourth with a time of 7.28 seconds. Curtis also finished in first place in the 60 hurdle finals with a time 8.48 seconds.

A pair of Rams were also able to claim the top two spots in the 200-meter finals. Senior

Jeff Santos won the event with a time of 22.82 seconds and was followed by sophomore Justin

Marsland in second place. Marsland finished the race with a time of 23.10 seconds. Rhody also took first place in the 800-meter final when freshman Seth Ketler finished in two minutes, 2.79 seconds. In the 1000-meter finals the Rams were able to once again take the top spot when senior Sam Coppola finished with a time of two minutes, 31.91 seconds. In the long jump finals the Rams once again had athletes finish in the top two spots. Freshman Tyler Costeira finished in first place with a distance of 6.68 meters. Senior Stephen Cirella wasn’t far behind, finishing in second place with a mark of 6.07 meters. The shot put event was also all Rhody as the Rams laid claim to the top three spots in this event. Junior Derek Jacobs took home first place with a distance of 14.98 meters. Not far behind him was freshman Nick Morse who had a distance of 14.93 meters. Rounding out the top three was Cirella who had a distance of 14.50 meters to earn his second top three finish of the day.

Both the Men’s and Women’s team will be back in action this weekend as they host the Atlantic-10 Conference Championships. The events will begin on Saturday starting at 9 a.m. and run through Sunday.