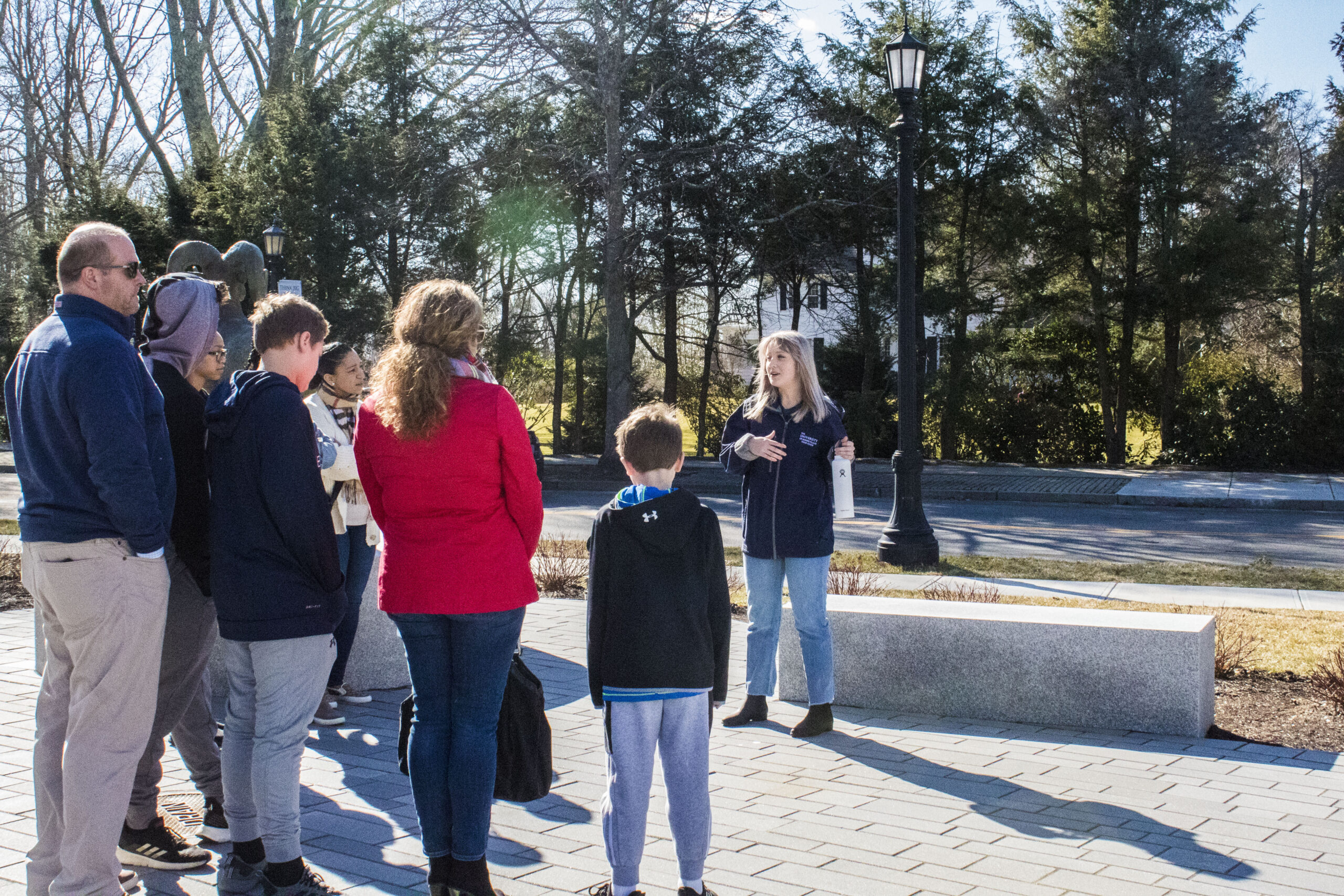 Tour guides for prospective students are having to learn new routes. Photo by Siobhan Richards.

As a new generation of students apply to college, the University of Rhode Island is focusing tours for prospective students on tour guide’s personal experiences.

The new tour is tailored to the needs and interests of Generation Z, or “iGen,” students. The University conducted interviews among the University’s student body to determine what high school students would like to see changed in tours. Ultimately, admissions decided on “URI can be a student’s second home” as their new theme. Erin Earle, Director of Campus Visit Experience in undergraduate admissions  wants her tour guides to share what makes URI so special with prospective students through their own personal experiences.

Earle was inspired by the 2017 book “iGen.” The book characterizes iGen as the first generation to reach adolescence after the popularization of smartphones. Earle read this book and realized that the tours need to be more tailored to this new type of generation.

“Our old tour was very informative,” Earle said. “Just in the past 15 years, with the internet being so verbose and you being able to get it on your phones so much easier, we don’t need to tell you every single detail about URI because you have access to it and know how to navigate technology and information.”

Earle and her team also discussed the direction of tours with student tour guides. After hearing their feedback, the decision was made to make the admission sessions more informative and academic-based and shift the tours towards student life.

Junior Cassie Santiago is a tour guide who has given multiple one-on-one personal tours for prospective students, as well as traditional group tours.

“When I give my private tours, I usually get good feedback because it’s really personal,” Santiago said. “You can make those connections which I think is the ultimate goal of the new tour, which makes everything go smoothly.”
Still, Santiago worries that with regular-sized tours, it’s much harder to find a balance between academic and personal information. In personal tours, prospective students can help guide the tour and see what they want to, while this is not possible for the average tour group.

URI has a team of 150 tour guides, all of diverse backgrounds with different majors, campus involvements and stories to share. Earle intentionally keeps such a large team and tour guides in the Welcome Center even when they’re not giving tours so that on any given day, visitors can meet up to five tour guides with different experiences.

“What’s cool about URI is a lot of students, whatever they’re into, they can find their niche here and that’s what I really love about our school,” Earle said. “That’s what we’re trying to convey in the tour is whatever you’re into, you’re going to find your people here. It’s not just that that happens, it’s that URI helps that happen through the way that we’re organized and structured, so that’s the cool part about it.”

The tours are targeted towards iGen students, but their parents often accompany them on the tour as well. It is not unusual for parents to play a role in a student’s college decision making process as Santiago’s had in hers.

Santiago has noted that parents tend to ask more questions during tours than students do, with higher interest in academics. She believes that tours should be for families, in an effort to showcase what students will get out of their time at URI, and also highlight why parents should be excited for their children.

As a new generation of students come into college, it also means there is a new generation of parents to appeal to: parents who are different from those who took the tour when Earle started at the University. Still, the final decision on where to go to school belongs ultimately to the student, or at least, it should, according to Earle.  “The foundation of our daily tour program is that we want to show them exactly who we are and if that works for them, awesome,” Earle said. “We don’t need to pretend that we’re something we’re not, we don’t need to show something we’re not, we just show who we are and if this is going to be the right fit for them, they’ll know. We just try to do that as authentically as possible.”