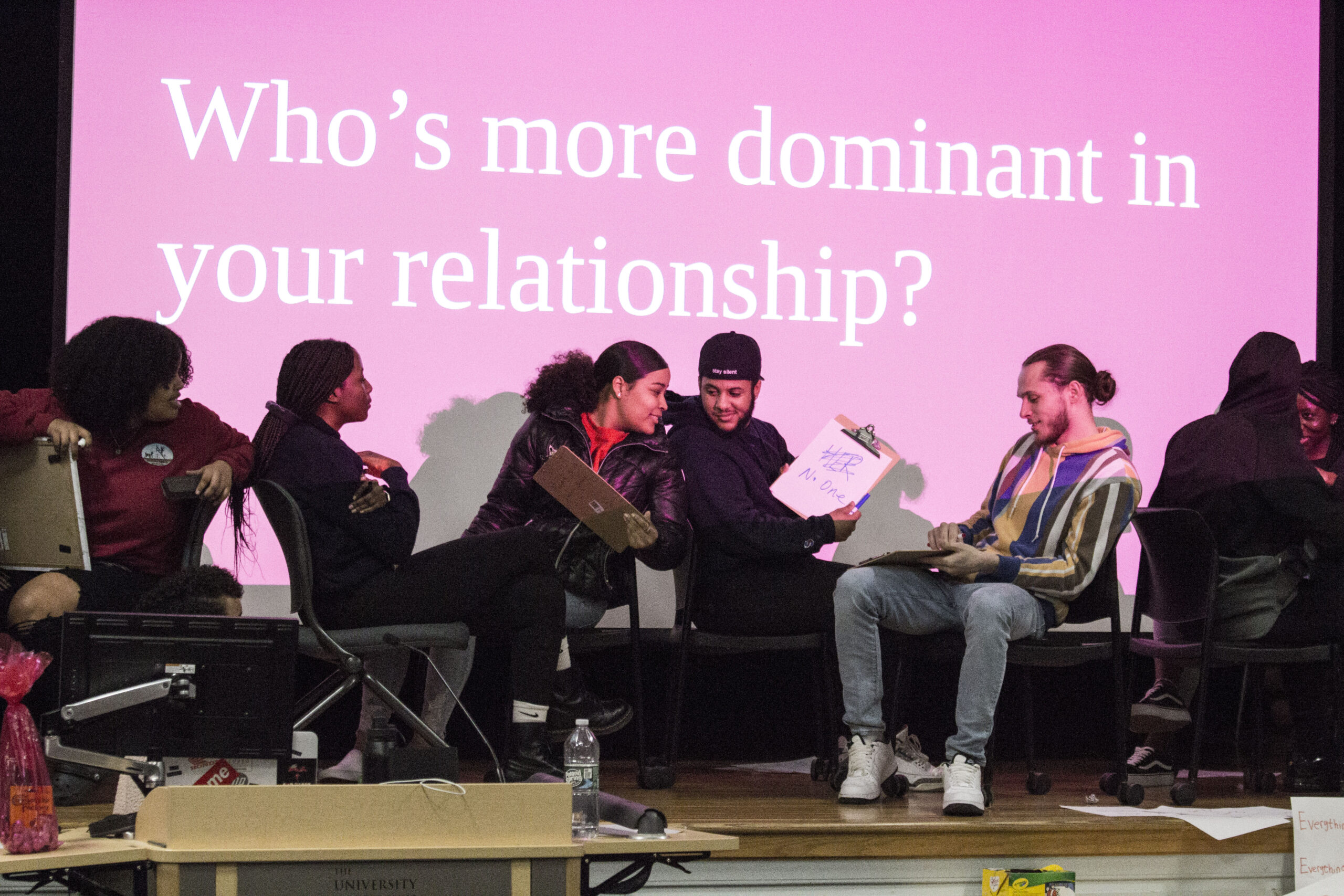 Hosted by the Black Student Union, ‘(Black) Love Boat’ pitted friends and couples against one another to see who knew who better. Photo by James McIntosh.

Three pairs of friends and one couple competed in a newlywed-style game for a $25 gift card to the Cheesecake Factory and a bottle of sparkling cider. The 20 questions ranged from what about your partner bothers you to who is more petty in your relationship and to your partner’s love language. These questions brought out a competitive nature that was entertaining for everyone in attendance to witness.

My biggest takeaways from the event are as follows:

Anyone watching these “couples” compete against each other could see that there was love between the friends as well as the couples. This was also proven through the number of answers the friend couples got correct. The juniors did have an edge on the freshmen because of the length of time they’ve known each other and grown their friendships, but it was amusing to see them know more than the actual couple did about each other.

The Black Student Union’s Public Relations Chair Sydnee Shorter said friendships were included to compete intentionally because they wanted to show that love can come in multiple forms, not just in a romantic relationship.

When you get comfortable with a partner or friend, it may be an answer that is second nature, but it likely isn’t always expressed and it was great to see the night end on such a sweet, positive note.

While the prizes were nice and definitely a motivator for the contestants, there was also a desire to prove that they had the best friendship or relationship and most arguments onstage stemmed between the two pairs of juniors. In the end, it was between them to be crowned the winners as they wanted to show that they were the better best friends.

Audiences laughed along and shared who their relationship and friendship goals were, backing certain couples over others as the night went on.

“It was a good way to know if I really knew one of my best friends and turns out I do,” Vaz said.

The BSU had focused their weekly meeting on the topic of Black Love the meeting before BSU week and decided that it was something to be highlighted in one of their events.

“We’re just trying to get across why it’s still important because obviously there’s a lot of different changes in society with a lot more interracial relationships,” Shorter said, “which is a good thing and a bad thing if we all still recognize the importance of understanding our blackness. There’s also the issue of fetishism in the black community so we like to go back to the core of why it’s still important to recognize that love between black people.”

It was something that was important to Vaz as well when she decided to compete. She wanted to show that healthy and happy Black Love does exist and should be shown off.

Obviously, I took a lot away from this event, which was the hope of Shorter and the members of BSU who helped plan the event. They had decided that they needed something more fun and energetic in their week of more serious educational events, but it doesn’t mean that this event wasn’t educational as well.

“We’re trying to have fun and have a good time, but also understand the importance [of our events],” Shorter said. “It’s so important for us to come together as a community on campus.”