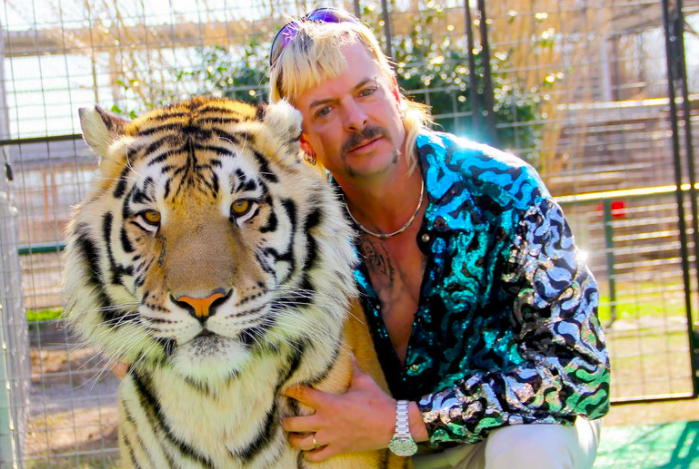 Have you ever been accused of feeding your husband to tigers? Or have you owned a zoo and ran for president? Gotten involved in a murder-for-hire plot?

All of this and more madness can be found in Netflix’s new docuseries “Tiger King: Murder, Mayhem and Madness” that was released on March 20.

This seven-part docuseries has to have been one of the most wild things I’ve ever seen: a circus of a story revolving around the ‘Tiger King’ Joseph Maldonado-Passage’s life, filmed over the course of five years, documented by Eric Goode and Rebecca Chaiklin.

Maldonado-Passage, also known as ‘Joe Exotic’ by those who attended his zoo or watched his TV show online, was the owner of the Greater Wynnewood Exotic Animal Park, home to many exotic animals which included pumas, lions and — you guessed it — tigers.

Viewers are taken through the big cat owner community for a greater understanding of the people that own or have previously owned such animals. We are introduced to Bhagavan ‘Doc’ Antle, a big cat owner whose animals have been featured in movies like “Dr. Doolittle” and brought into the halls of Congress, as well as Mario Tabraue, a former cocaine drug lord who used this means to finance his interest in owning exotic animals.

The society of big-cat owners is one of fascination, as these characters are all plagued with controversy for varying reasons: Maldonado-Passage embezzled more than $60,000 to finance campaigns for both president and governor; Antle ran a “world-renowned” wildlife preserve where workers lived in nauseating conditions amongst cockroaches; Tabraue was involved in the murder of an agent of the Bureau of Alcohol, Tobacco, Firearms and Explosives; Baskin has been accused of feeding her disappeared husband to her tigers.

This story is laid out in a way that forces you to keep watching (curiosity killed the cat, right?), as each episode offers more mind-blowing and deeply-enthralling actions.

The main focus of this series is Maldonado-Passage and his feud with Big Cat Rescue owner Carole Baskin. The two get involved in a lawsuit that spans the entire series as Maldonado-Passage continues to defame Baskin in his online TV show.

Maldonado-Passage is a wildly captivating person as he engages in a polygamous relationship, hands out condoms with his face on them during his political campaigns and is involved in a murder-for-hire plot aimed at Baskin. Baskin and Maldonado-Passage throughout the series are pinned against each other as Baskin goes on a crusade to shut down the Greater Wynnewood Exotic Animal Park as well as other big-cat breeding sites while Maldonado-Passage claims that Baskin is doing the same thing as him as she also holds big cats in captivity.

The series ends with Maldonado-Passage having his zoo swept out from underneath him by Jeff Lowe, a South Carolina businessman with his own questionable past, after Maldonado-Passage lost his lawsuit to Baskin in 2013 and was in immense debt to her. Joe Exotic thereafter found himself in prison for the murder-for-hire plot against Baskin as well as charges for animal cruelty that involved his tigers.

If you are looking for a good series to binge-watch during these trying times, I would highly recommend this series that swallowed up a good seven hours of my life. Seven hours that I’d willingly do over again.