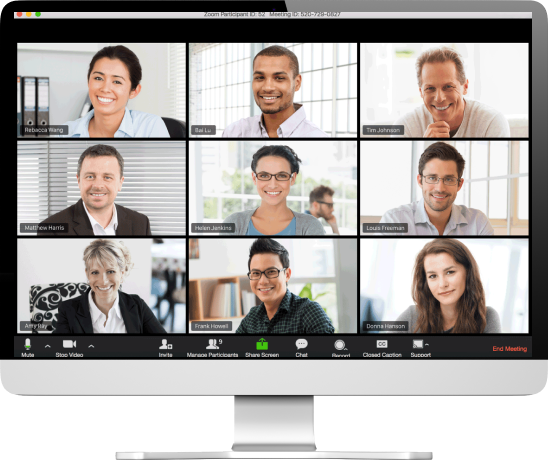 Many classes have transferred to a video conference format due to the spread of COVID-19. Photo courtesy of Zoom Video Communications Inc.

While the transition to remote learning due to the COVID-19 pandemic has created challenges, it has also provided new learning opportunities for students at the University of Rhode Island.

As millions of Americans self-quarantine, colleges across the country have transitioned traditionally in-person classes to an online format in order to prevent spread of the virus on campus. URI originally announced that classes from March 23 through at least April 3 would all be taught online, but as the virus continued to spread, the University decided to extend remote learning through the end of the spring semester.

“It was clear that the virus was going to be a massive interruption to society all over the world, and for those of us at the University,” Provost and Vice President for Academic Affairs Donald DeHayes said. “Our first and foremost goal was to support the health and academic work of our students.”

According to DeHayes, about 1,800 classes that were originally taught in-person have transitioned online. DeHayes explained that most instructors take several months preparing to teach a typical online course, so abruptly moving an in-person online can present challenges. For example, some professors had to scramble to modify their curriculum with only two weeks to prepare.

Despite this, DeHayes believes that the University’s community has risen to the challenge: resources such as the Academic Enhancement Center continue to support students virtually, while the Office of the Advancement of Teaching and Learning has produced hundreds of workshops teaching faculty about remote learning technologies and online teaching methods, according to DeHayes.

“It’s really been remarkable the way that faculty staff and students have pulled together as a community to make this work academically,” DeHayes said. “Students supporting each other, faculty helping each other, not only academically, people have pulled together to support each other emotionally. Because of what is going on in their communities, many of us are in very stressful situations.”

Although DeHayes said that the current situation is far from ideal, he found that the URI community has generally handled the transition well.

“We mostly heard very positive things from both faculty and students,” DeHayes said. “We also learned about some very creative ways that faculty have been able to deliver classes to students.”

Kinesiology professor Matthew Delmonico said that although remote learning is necessary due to the pandemic, it can make teaching certain classes, like the sciences, challenging.

“Unfortunately a lot of my classes are labs,” Delmonico said. “I couldn’t physically teach how to take blood pressure, for example. I think a lot of faculty are trying to come up with alternatives, like videos. Some of these things you can only do in person though, so that’s why in the summer and fall, I hope to work with students in person so they can actually do what we show them on video.”

Delmonico teaches most of his courses over video conferencing software WebEx and URI’s learning management system, Sakai, and has generally had no technical difficulties with the program unless his students had a weak internet signal. However, the online setup has made administering exams fairly more difficult.

“I think the biggest pitfall to this is assessments,” Delmonico said. “It’s hard to give examinations when you are online. Even if you built in a certain time limit, you don’t have control over your exam like you normally would.”

Despite these difficulties, Delmonico is optimistic regarding the University’s leadership.

“I think [the University is] doing everything that they can to ensure that courses are delivered in an efficient way, as close as face-to-face classes as possible,” Delmonico said. “There’s been help, not so much that it is overwhelming, but enough that I know what to do now.”

Although some students believe the University is doing the best they can, they also wish that the University asked for more student feedback regarding remote learning.

“I think [the University has] done a pretty good job considering the circumstances, because this is so out of their control,” Catherine Callahan, a sophomore nursing major, said. “But I think maybe before classes started they could have sent a survey to get students’ perspective on how they would have liked to learn during this time from each professor.”

“[WebEx] has been spotty or choppy sometimes, but most of the time I think it’s good,” Callahan said. “I think it’s harder to learn that way just because there are more distractions. At least with pre-recorded lectures you can go back and listen again, but I definitely feel like it’s more challenging, and having a quiet work environment is hard with WebEx as well.”

As a nursing student, much of Callahan’s classwork consists of labs and practicums. Since these classes can no longer meet in-person for sessions, they may instead use simulation software. Callahan cited Shadow Health as a program used in her classes. The program creates simulations of tasks, like performing exams on patients.

Senior art major Elaina Smith said that her department has also used new programs in order to adapt. One of her professors is looking into a program that would create a 3D art exhibition space so students can display their work.

Smith added that having limited resources for art, especially for students who left materials at the University, can be challenging, but also forces them to be creative.

“Many of us are using this as an opportunity to actually explore different art materials [and] processes that we wouldn’t have tried before, especially those who cannot access their project [at the University],” Smith said.

Smith, for example, is using a dead lily’s petals and pollen to create a piece of art. Usually, Smith uses paints, pastels and pencils, so the move to online learning has helped her discover new ways to create.

In regards to what could be improved, Smith said she hopes that professors are mindful of the emotional toll the pandemic has on their students.

“As far as technology is concerned, I think each professor is going to have their preference and that’s that,” Smith said. “But some of them are taking this as a ‘now you have more free time so here’s more work,’ which isn’t fair. I don’t really think this is something that can be enforced or regulated, but workloads shouldn’t be increased because we’re all already stressed about classes and now there’s the looming stress of COVID-19 and the effect that has on every single person’s individual situation. I just think there could be more general empathy and understanding, especially if we don’t end up switching all classes a pass/fail.”