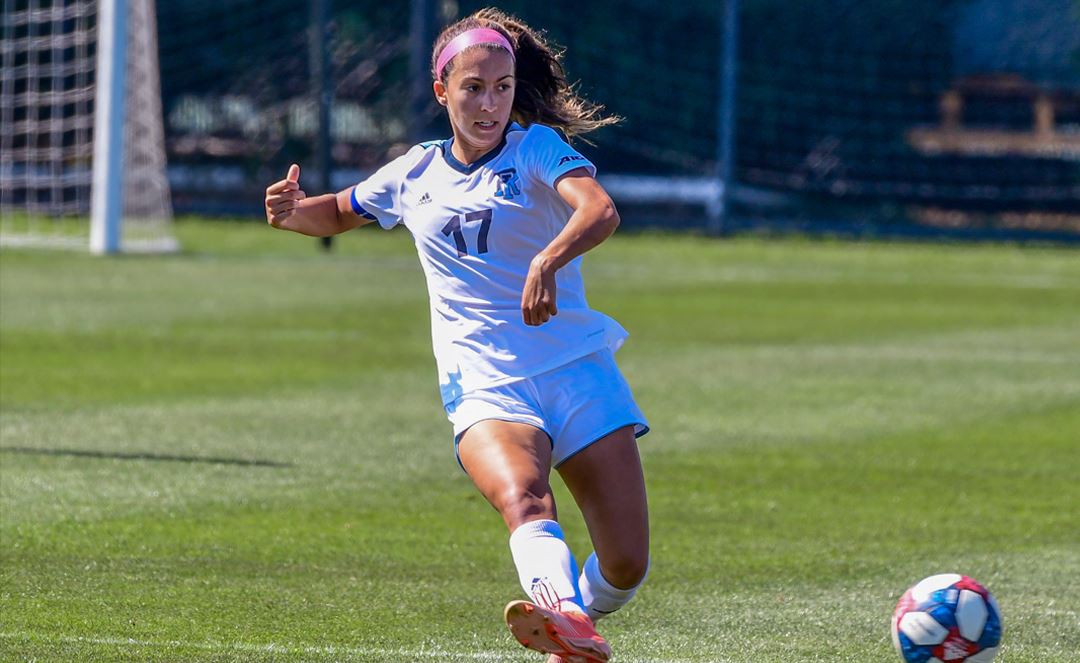 Jaileen Goncalves passes the ball in a game from last season. Photo from GoRhody.com.

The Rhode Island women’s soccer has had some trying times within the past few years.

Just two years ago, they went winless during the regular season. They improved on that last season, finishing with a 4-9-5 record and earning six conference points, the most since 2016.

Heading into her fourth season as the team’s head coach, Megan Jessee is looking to continue the program’s upward trajectory and make some noise in the Atlantic 10 this spring. With the exception of Jaileen Goncalves, Kelly Mayo and Eydis Embla Ludviksdottir, the team remains intact for the upcoming season. This includes Rebecca D’Anna, Brooke Cavino and Tali O’Leary, who led the team in goals last season.

“It’s huge,” said Jessee on having her top three goal-scorers returning this spring. “It’s definitely one of the areas that we need to get better in, so to have those players back with a whole another year of experience under their belt is only going to help them in the bigger picture.

This year, the program welcomes seven freshmen and a transfer to the roster. Coach Jessee praised the new group’s competitiveness and called them an “extension” of last year’s team.

“One thing I love about this year’s group is we have a lot of kids that have a good athletic base, which is huge at this level,” she said.  “I think tactically this is a group that is much more knowledgeable about the game and competitively, they bring another element, which adds to the players on our roster that love this game.”

Unfortunately, because of the coronavirus, the team hasn’t had much time to get together on the field. Instead, the team spent time bonding through Zoom meetings, with spring meetings being focused on tactical approaches to the game.

As the summer months approached and calls for racial equality swept the country, the message of these Zoom meetings shifted in order to allow players to express themselves and get registered to vote.

This week, the team will finally have the chance to get on the field for the first time since March for small group workouts. Following return-to-play guidelines seen in other sports, Jessee said players for now will be training in groups of five.

The regular season and the postseason will also look much different in the spring because of the COVID-19 restrictions. Instead of playing a typical 10-game conference schedule, Jessee said the team will play a modified six-game schedule. She also said the conference tournament will also be a four-team tournament over the course of a weekend instead of a span of a week. This makes the margin for error much smaller and the stakes to play postseason soccer much higher. Despite this, Jessee still expects her Rams to compete in the A-10 this season.

“I think we have gotten to the point now where expectations are that we can make it to the postseason,” Jessee said. “Last year, we made some huge strides, but I think now with a lot of those games that were lost and tied, we can turn into wins fairly easily.”

Jessee and the Rhode Island women’s soccer team are still months away from hitting the field, but for now, as we have done for the past six months, the only thing we can do is wait.