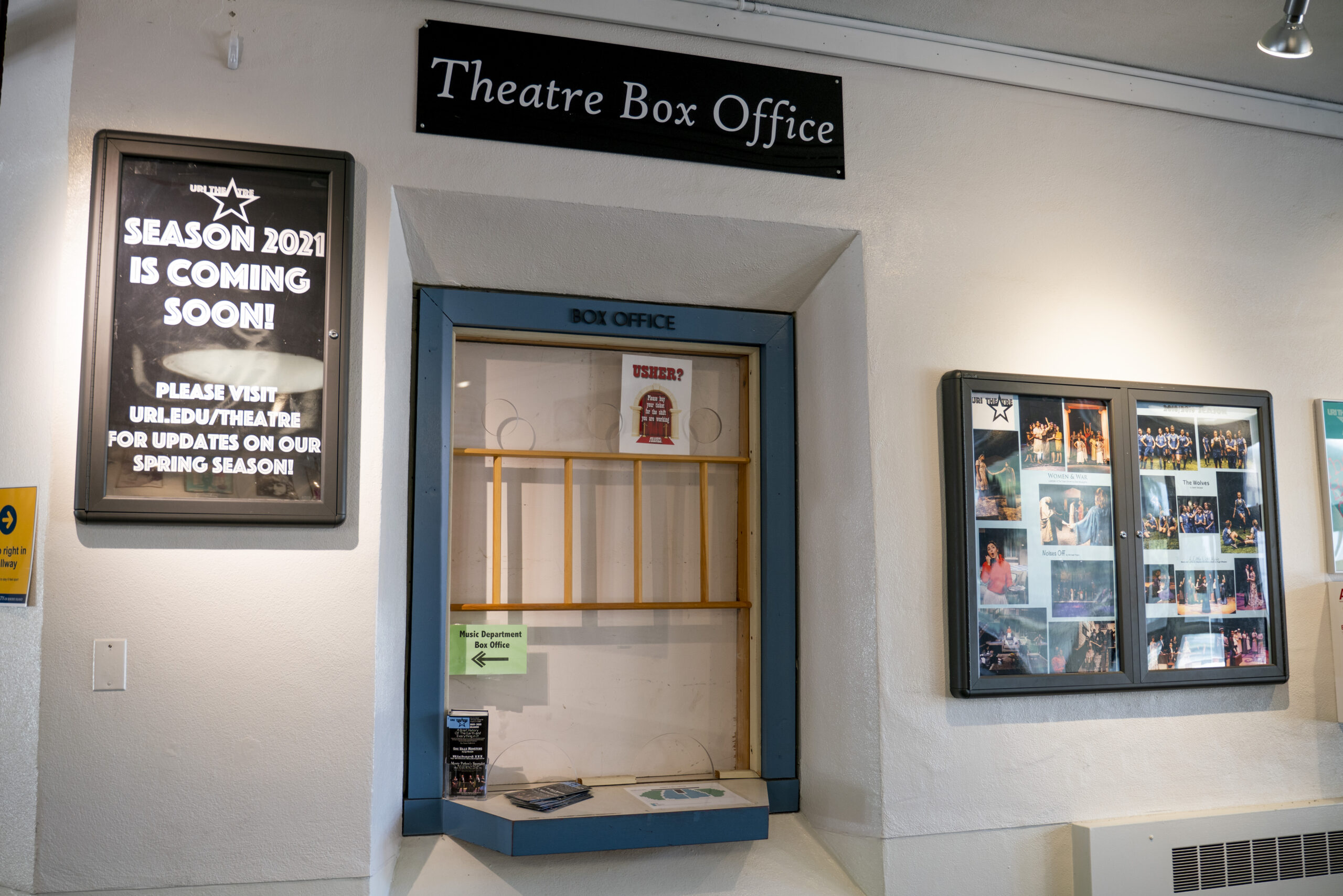 This semester’s traditional theater shows are postponed due to the pandemic. Photo by Ethan Pellegrino.

While on-stage productions have paused, the University of Rhode Island’s theatre program is innovating ways for students to continue developing their craft.

THE 322: Play Direction, a class where student-directed performances are typically presented at the end of the spring semester, was postponed after URI transitioned to remote learning due to the COVID-19 pandemic. After receiving a second notification that there could be no on-stage productions before the fall semester, associate professor of performance Rachel Walshe came up with the idea to have these students direct radio plays.

When in-person theatre productions were halted across the world, Walshe watched remote performances on Zoom, which inspired her to incorporate this into URI’s theatre program as a socially-distanced performance opportunity for students.

“I found the audio-only format to kind of be the most powerful,” said Walshe. “I think there is something really intimate and exciting about allowing your eyes to do a lot of the imagining to kind of fill in the picture.”

These plays, in cooperation with the Harrington School of Communication and Media Studies, will be recorded in the Broadcast Center and TV Production Studio with students socially distanced and wearing face masks.

David Howard, department chair of the theatre program, said this would allow students to gain experience working in a slightly different medium that parallels theatre, as well as develop a useful skill in this new age of entertainment. Since this is a digital medium, students will have a copy of their performance work that they will be able to use for reels in the future.

“In some cases, we should be able to have the broadcasting rights for them which would allow everyone to see them,” Howard said of the student-directed radio plays.

While remote learning and radio plays aren’t the norm for theatre majors, senior Mary Mullane remains hopeful that this new format will help her and other theatre majors improve and expand their skill sets.

“It’s all going to build up our skills that we didn’t really know we had,” Mullane said.

Students who were working on the spring musical “Spamalot,” which has been postponed to the spring semester, worked on different projects to earn the production credits they would have received had the play been performed. These projects included theatre production critiques, a stage managers round table for recruitment and student training as well as creating social media videos.

Mullane, who was supposed to perform in “Spamalot” as Patsy last spring, said that students are still holding onto the hope that it can be performed this spring. The lack of in-person theatre productions has proven hard for students who rely on these performances to gain production credits for graduation, but the department has been lenient as the pandemic continues to postpone performances.

“We would never say ‘you can’t graduate because you didn’t get an opportunity,’” said Howard of students that may have missed the opportunity to gain production credits from the postponed spring musical. “That’s not their fault; it’s COVID’s fault.”

Students, in their free time during the pandemic, have also been given the opportunity to experiment on their own. Howard hopes, whether that be through a YouTube channel making art or studying drag queen makeup videos, that they take advantage of these virtual opportunities.

“Maybe it’s not for credit, but it’s to inspire them that the art doesn’t die just because we may not be able to have an audience,” said Howard.

Although people can’t go to the theatre presently, Howard said that URI students have access to professional theatre productions online through the University’s database.

A “conversation series” on current issues within the profession of theatre is in the works, according to Howard. The issues to be addressed in this four-lecture series include: challenges persons of color face in the context of the Black Lives Matter movement, sexual assault and power struggles in theatre, black, inigenous and people of color representation in theatre and navigating digital presence.

This continued expansion on educational and interactive opportunities by the department has kept students engaged throughout the pandemic.

As the world of theatre has “gone dark” due to the COVID-19 pandemic, Mullane remains steadfast to the art of theatre.