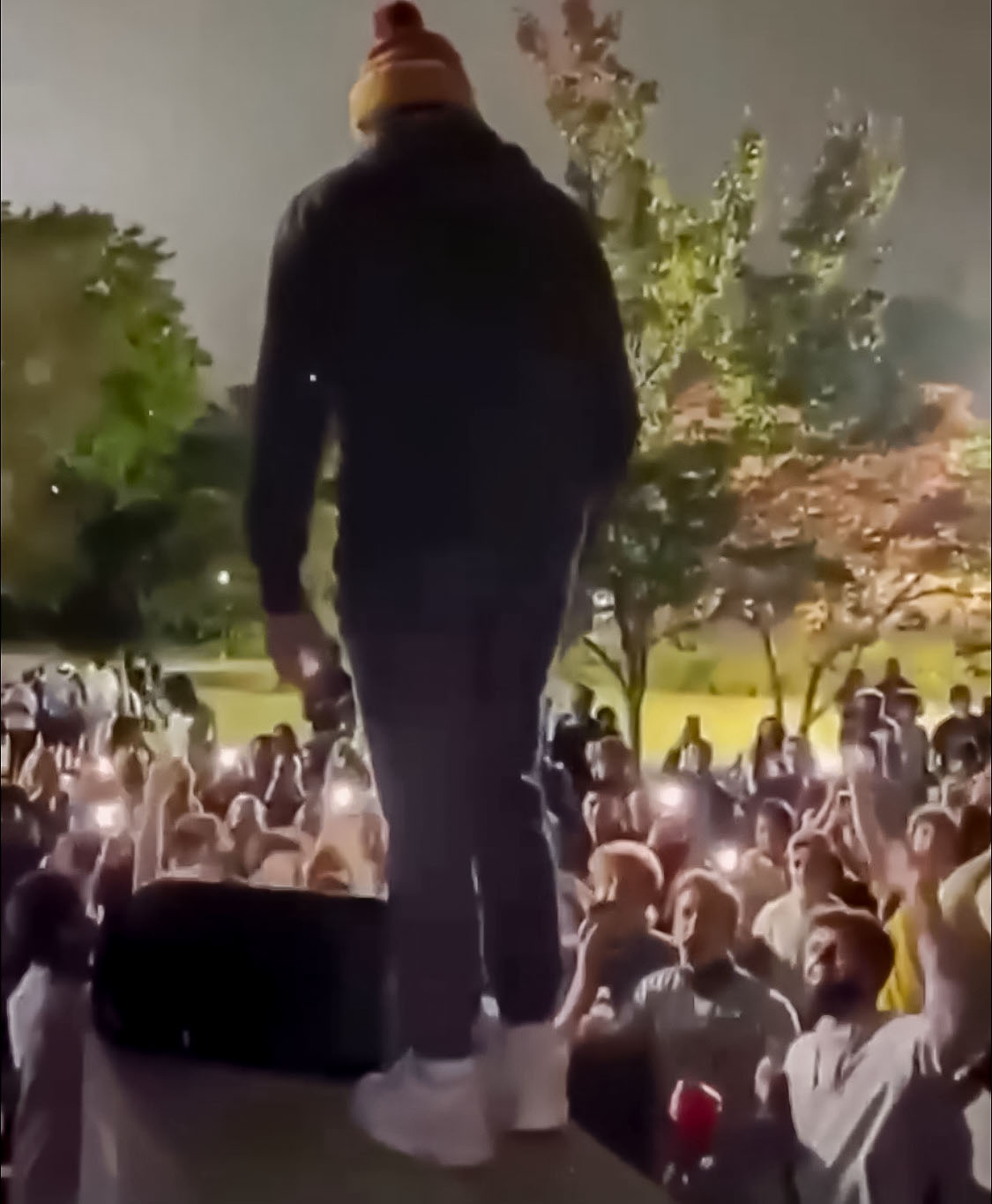 Videos of large student groups gathering at the University of Rhode Island and the Kingston Emporium despite social distancing mandates have gone viral online, igniting concerns of a major COVID-19 outbreak in the community.

Twitter accounts @BarstoolRhody and @rhodychicks and Instagram account @unmaskeduri have all posted videos in the last several weeks showing large groups of students gathering, many without masks.

Senior Jeralyn Lora said that she saw large crowds gathering on the road in front of the Fayerweather and Gorham residence halls on the nights of both Friday, Sept. 25 and Saturday, Sept. 26, with most participants unmasked.

“I could hear people screaming outside, and I went to see and it was just the whole road was just packed with people,” Lora said. “It was the same thing Saturday night. It wasn’t as full, but I walked up the road and there were groups everywhere.”

A video obtained by The Good Five-Cent Cigar shows a University police cruiser by the area but no officer exiting the vehicle to disperse the crowd. Lora said that she observed the same thing.

After seeing the groups over that weekend, Lora emailed Dean of Students Daniel Graney to express her concerns about the groups gathering outside of her building.

In an email response obtained by the Good Five Cent Cigar, Graney said to Lora that most of the groups were less than 15 people, and if any larger groups had been seen they would have been instructed to disperse. He also said that most of the students were wearing masks.

“He just responded saying that ‘they’re able to take care of it, like they have people on it, and that none of the groups were actually that big, it wasn’t that much crowding,’” Lora said. “And I was just like, ‘that’s not what it is at all.’”

Graney did not respond to the Cigar’s requests for comment.

Vice President for Student Affairs Kathy Collins said that if the students are identified from videos of gatherings, then they can be referred to the Office of Community Standards’ Student Conduct System. The conduct system creates an investigation into a student’s potential misconduct, and can result in punishment depending on the case.

If the names of students in a group cannot be collected, groups are continually broken up, dispersed and handed masks, according to Collins. Director of Public Safety Stephen Baker, Campus Police Chief Major Michael Jagoda and Collins all said that large groups are being broken up by both University Police and other staff. These other staff members include Collins, Graney and Director of Housing & Residential Life Frankie Minor, among others.

Students on campus have seen people not wearing masks in other settings as well.

Senior Lauren Von Holten said that she was in the Robert L. Carothers Library and Learning Commons when she saw a group of students gathering in the 24-hour room without masks on.

“There [was] a group of freshmen trying to figure out how to use the printers, there were probably like six of them, and they were all on top of each other,” Von Holten said. “And no one was wearing a mask.”

Another student, Shannon Walthall, said that while she sees most people wearing masks, there are times where she sees students wearing them incorrectly.

The reports of students not wearing masks and gathering in large groups has been worrying to others in the URI community.

Director of Health Services Ellen Reynolds warned that if this trend continues, difficult decisions might have to be made. While she said that she understands that students want to have a “normal” college experience, some sacrifices have to be made for now.

“My concern is that if we continue to see those large gatherings, those people not adhering to the physical distancing and those not wearing their mask or not wearing them properly, we’re going to be forced to take some draconian measures,” Reynolds said.

This is not a University effort alone, said Collins, as the work also falls on students holding one another accountable.

“There’s 17,000 of you and less than 3,000 of us,” Collins said, referring to the number of students compared to the number of faculty, staff and administration. “We’ve all got to play a role, and our staff cannot be everywhere.”

URI Police, according to Jagoda, haven’t seen many people violating the University’s requests and policies regarding large gatherings and social distancing in accordance with the Rhode Island Department of Health. However, he said that if large gatherings are seen, they will be immediately addressed.

Extra officers have been put on patrol on the weekends, particularly in the area near the Roger Williams Complex, and some officers have been held past their shifts to help cover the crowds, according to Baker. URI Police have also been working with the South Kingstown Police Department to place extra officers at the Emporium.

In response to students who feel as though University police are not doing enough to disperse the crowds, Baker said that other calls, such as requests for medical assistance, can take officers away from the crowds. He noted that there were quite a few from the night of Saturday, Sept. 26 into the morning of Sunday, Sept. 27.

“They get pulled away, crowds reform, they go back, they break them up, so it’s kind of a continuous cycle,” Baker said. “As long as the people comply and break up when we tell them to, I think we’ve done our job.”