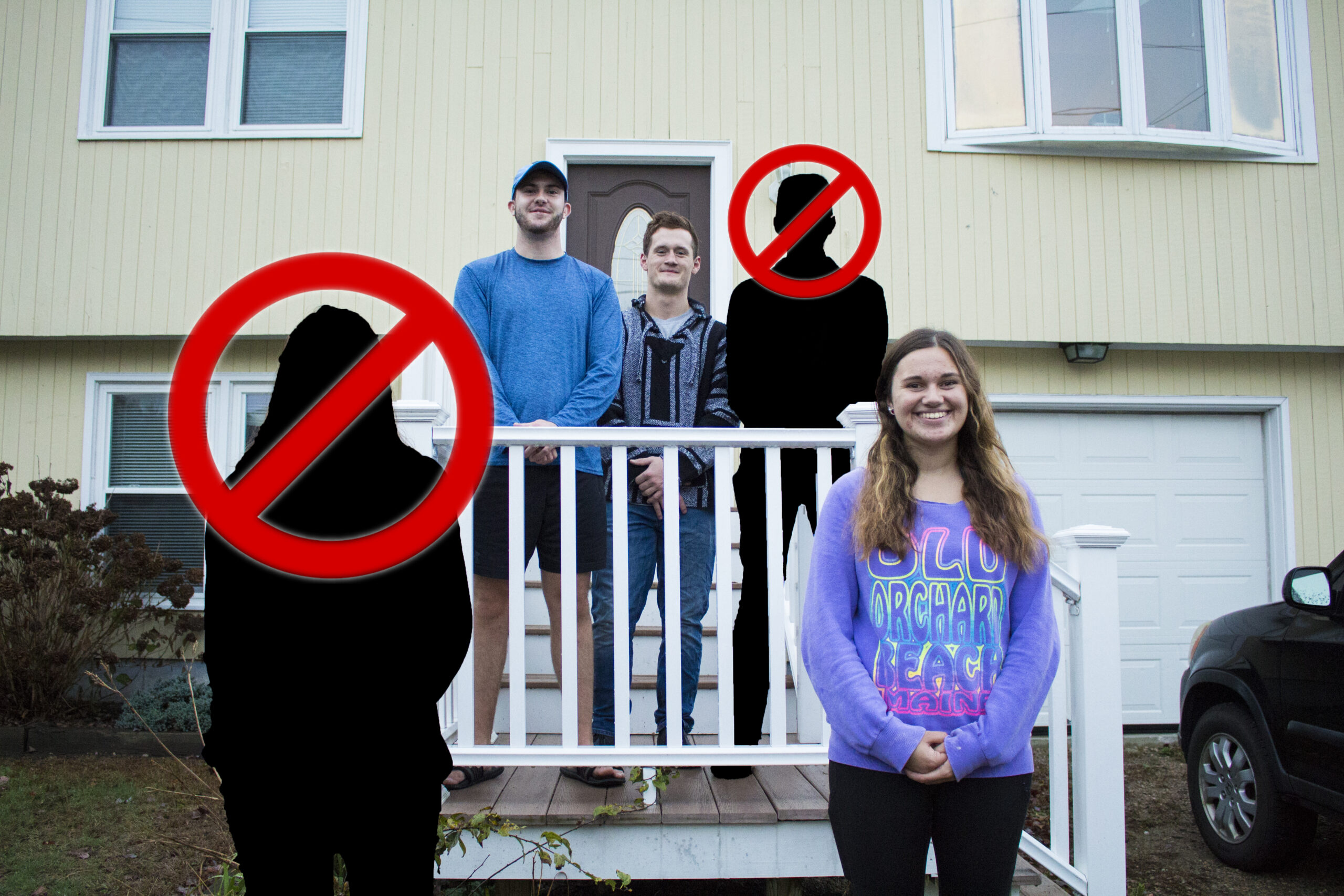 Students Andy Main, Tyler Pelletier and Kayla Michaud currently live in a five-person house which will only be available to three students next year. Photo by James McIntosh.

A Narragansett Town Council ordinance preventing over three students from renting together has already begun to affect both off-campus students and realtors for next year.

The ordinance has left more students looking for fewer houses, which are now being rented at higher prices, according to Evan Morrill, who is one of the principal owners of Narragansett Properties.

“So far we have seen a massive increase in rental prices for next year,” Morrill said. “Even with the two and three bedroom houses, even though they’re not affected by the ordinance, across the board the houses are going up in rent.”
Morrill also said that the average price of a house this year was $600-650 per bedroom per month, on average. Next year, it will be around $750.

According to the Independent, Narragansett formed an “Ad Hoc Committee on the University of Rhode Island Rental Problems” in 2014, which recommended that the town limit housing to four unrelated students per household. In response, the American Civil Liberties Union of Rhode Island filed a lawsuit, and a 2017 municipal court ruling called that ordinance unconstitutional.

The ordinance was passed shortly after a ruling this past spring from the Rhode Island Superior Court which said that certain neighborhoods in Providence could limit housing among college students in certain parts of the city to three students, according to RI Central.

In response, however, the Narragansett 2100, a group representing local landlords, has filed a complaint in court against the town for “stifling public debate.”

Tom Morrill, another principal owner of Narragansett Properties, said he agrees with the 2100.

“[The Narragansett Town Council] went online using Zoom and they didn’t allow for enough people who wanted to say something,” he said. “And so quite a number of people were not allowed to say anything.”

No one from the Narragansett Town Council responded to request for comment by publication deadline.
Evan Morrill agreed, saying that Town Council members are not willing to listen to any dissenting opinions.

“They don’t want to hear really what anyone is saying unless it’s what they agree with,” Evan Morrill said.

Chair of the Student Senate External Affairs Committee Grace Kiernan said that she believes that the ordinance has caused more stress among students, and could lead to negative consequences for the University and the town of Narragansett.

“It’s been very telling how quick kids are getting their housing because of how nervous they are to not have it,” Kiernan said. “I think it’s going to lead to a lot more kids renting privately, or worst case scenario, I think kids are going to transfer.”

Kiernan also said that the ordinance has affected the amount of students looking for certain houses.

“This year, I rented through the Properties and my realtor had 40 tours for a week,” said Kiernan. “One singular week had 40 tours because of how quickly kids were afraid they were going to lose their housing, and this was the end of September.”

Tom Morrill also believes that the ordinance is bad for both his business and the town itself.

“Putting limitations like this [lowers] the value of the houses, because so many people pay more for them as investments,” Morrill said. “At the same time, they’re pushing to have families come in, instead of having houses with students in them. If they do that, we’ve got the lowest taxes you can find. And that’s because the students don’t have kids, so they’re not sending them to the schools, that costs you as far as taxes.”

Kiernan said that trying to have more families come in doesn’t make sense in most areas that students rent in.

Both Tom and Evan Morrill also said that this year, for the first time, Narragansett Properties has filled every house they have to rent.

“I truly feel bad,” Evan Morrill said. “I’ve got a list of about five kids that are still reaching out to me looking for housing for this year for second semester, and unfortunately I have no place to put them.”

As for the future of the ordinance, Morrill ultimately believes a new Council will raise the number of students allowed to live together to four.

“It’s interesting because the town solicitor is saying that the former four student limit that they had is still in effect,” Morrill said. “I expect that when a new council comes in, in January, that they will have to pick one or the other. So we’re hoping they go to four, it’ll make life a lot easier for everybody.”

Kiernan believes that there is a possibility that a new council would throw the ordinance out altogether.

“There’s people running for the Narragansett Town Council right now who are opposed to the ordinance,” Kiernan said. “So there’s a potential that it could get overturned.”
Unless either of those happen, however, students looking to live in Narragansett will continue to face additional challenges in the future.