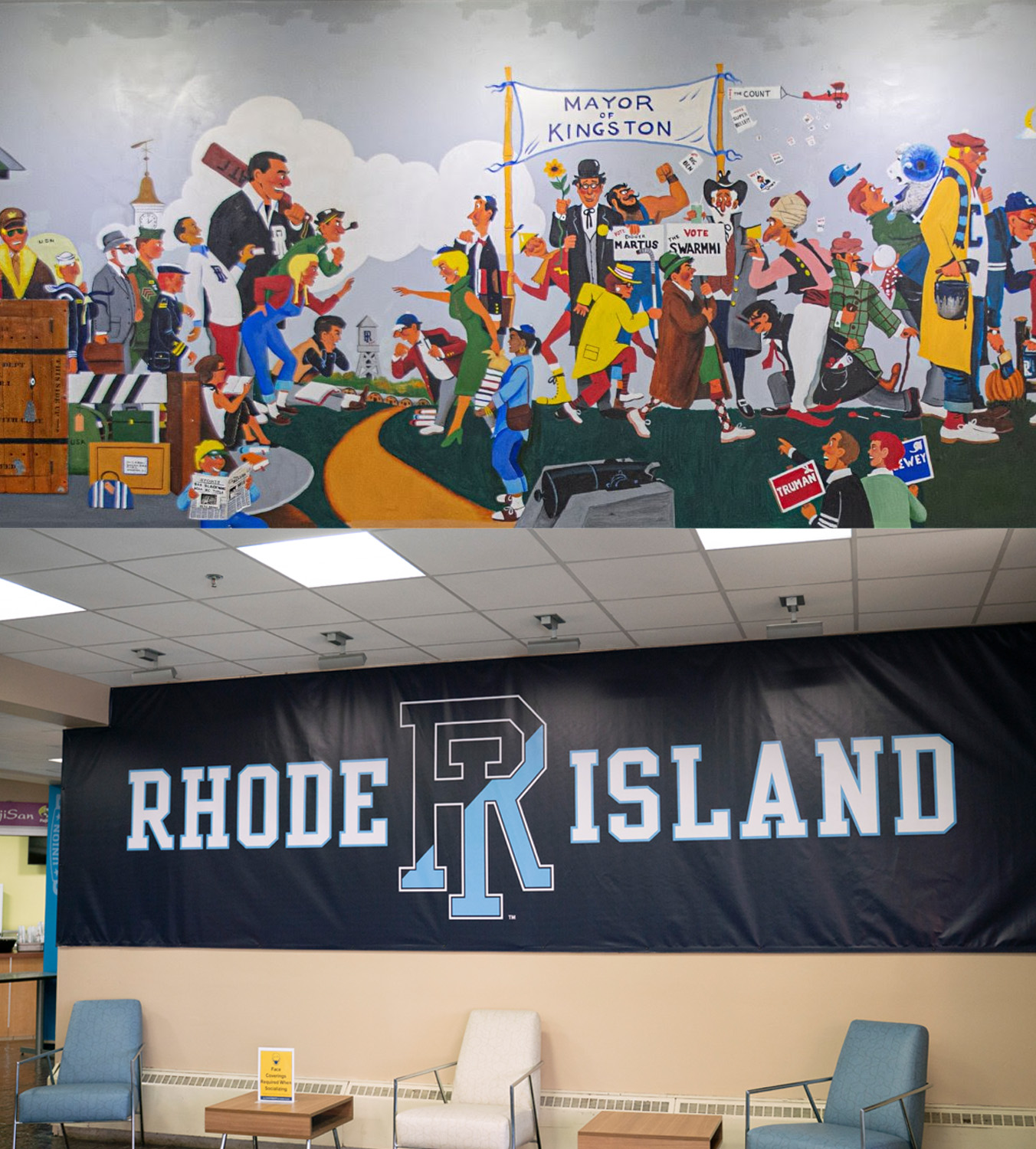 The wall where the mural was in the Memorial Union now has a URI banner on it. Top photo from uritoday.com, bottom photo by Ethan Pellegrino.

The University of Rhode Island has yet to decide how they will preserve two murals in the Memorial Union’s basement during future renovations, but these portrayals of 1950s URI have garnered the attention of national media in recent months.

Breitbart News published a misleading story on Sept. 9 about URI taking down the murals “depicting the events of World War II due to their lack of diversity.” This is false as the murals depict life at the University in the post-World War II era, not the actions of soldiers during World War II, according to University President David Dooley. The preservation of the mural was also already being discussed during renovation plans for the Memorial Union.

Dooley said that the local media who picked up the story about the murals reported the story fairly and accurately, but the national media did not. In reality, the possible removal of the murals is more a result of renovations to the Memorial Union. It became apparent that these murals, painted by World War II veteran Arthur Sherman, would have to be rebuilt in a significant way during the renovation process as they are painted directly onto plaster, according to Dooley.

“National sources made this into something that it never was, which was some kind of example of ‘cancel culture’ or over sensitive students demanding that the murals come down or anything like that; none of that was really a factor in our thinking to any degree,” Dooley said.

During the discussions of preservation, Dooley said that the lack of diversity in this artwork was acknowledged by university leadership but was not intentional when the murals were painted in the 1950s.

“The murals are indicative and illustrative of a very different URI; it was URI of the mid-1950s,” Dooley said. “And they capture URI I think in a clever and whimsical way as to what URI was like then and give a variety of snapshots [of] URI in that era.”

The two murals were not meant to intentionally exclude anyone, according to Arthur Sherman’s daughter Pamela Sherman. The director of the Memorial Union at the time, Chet Berry, commissioned Arthur Sherman to create these murals and depict the feel of the campus life at that point in time. The murals represent the time after the Servicemen’s Readjustment Act of 1944, more commonly known as the G.I. Bill, ultimately tied to why the Union was built in the first place.

Pamela Sherman had learned during the process of talking with her father about the murals that the Union was built to honor the service men and women who died in World War II, as well as those who later died in the Korean War and Vietnam War..

“That was the original intention of the Union; yes, [a] student gathering place and also to honor those [lost],” Pamela Sherman said. “And what my dad said, and this really touched me, was, he said, ‘we lost a lot of students in those wars. We lost a lot of students; whether they came from Rhode Island or not.’”

The importance of remembering all of those who have been a part of URI’s campus, served in the military and made the ultimate sacrifice was stressed greatly by Pamela Sherman.

With the murals having aged 70 years, Pamela Sherman asked why the University has not kept up with the changing campus environment overtime with more contemporary pieces depicting what it is today.

She said she felt bad if any students felt uncomfortable with the mural, as it wasn’t meant to represent the URI of today.

“It’s not meant to depict today; it’s meant to depict that window in time 70 years ago,” Pamela Sherman said. “And what my family would like to see is more contemporary artwork that shows and illustrates and depicts campus life and the events that are happening today.”

In plans for renovations of the Union, Dooley said that URI hopes to include video displays so that the ever-changing life at the University can be accurately captured.

“The imagery that you’re showing can change with time and capture in action, as well as in still pictures, URI as it was, as well as URI as it is and maybe even some looks into URI’s future,” Dooley said. “I think that will be a very important part of the renovated Memorial Union as there will be a lot of imagery for students so that everyone can have a chance to see themselves as well as see their community in new ways.”

As for the preservation of the murals, Pamela Sherman emphasized the importance of holding onto these pieces of URI history.

“Time flies, but we’ve got that connection to the past and we’ve already lost some of this artwork, so these are the last two from that era; let’s do what we can to preserve them,” she said.