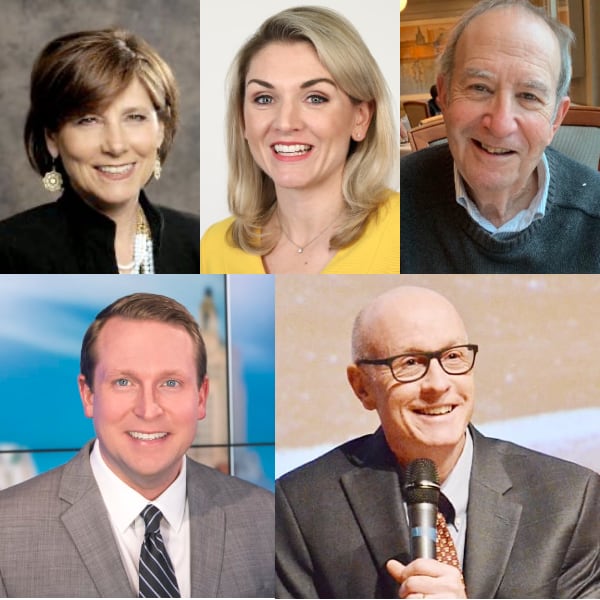 Hosted by the University of Rhode Island’s Harrington School of Communication and Media, the virtual lecture is dedicated to legendary Rhode Island journalist Jim Taricani who died in 2019. The lecture was founded in part by Taricani’s wife, Laurie White-Taricani, who wanted to create a series that focused on many of the First Amendment rights that her husband cared about.

The election-themed event began with a Q&A-style interview with long-time New York Times reporter and columnist Dan Barry, moderated by Sree Sreenivasan, a professor of journalism at Stony Brook University in New York.

Barry discussed the role of social media news in America today, and how the public often interprets it as genuine, when in reality, none of it has been verified.

“People are not relying on major newspapers and three networks any longer,” Barry said. “There are many, many, many news sources, and not all of them are honorable. Facebook and Twitter can never catch up with the avalanche of lies and misinformation that are being placed on their platforms to the detriment of the health of this republic.”

Barry also commented on the election and the distribution of people that voted for sitting President Donald Trump, emphasizing that not all of the 71 million people who cast their ballots in Trump’s favor were doing so for his divisive rhetoric. Rather, the public must consider the percentage of individuals who voted for him based upon economic policy most of all.

Sreenivasan also discussed with Barry the role of local journalism in the present day. Barry said that he’s had datelines in many local towns from his time at The Providence Journal, covering Rhode Island news. He also said that he is a big proponent of local news, as it helps inform the electorate and watch over people in power.

“Traditionally the newspapers would be the ones struggling to stay awake at the Board of Education meeting, or the Zoning Board of Appeals meeting,” Barry said. “Now, if you take away those reporters, you don’t have someone sitting in those rooms. And what’s being decided in those rooms directly affects you.”

Barry went on to discuss how journalists must continue their stronghold of the principles of journalism as they cover this election cycle and those in the future. He encouraged these aspiring reporters to focus on investigating every angle, hear both sides to a story and to not be caught up in “false equivalencies,” which he described as giving more credit to facts than rhetoric.

Pivoting from the discussion with Barry, Sreenivasan transitioned the lecture towards a slew of panelists that have or had notable careers as Rhode Island journalists. The panel consisted of WJAR-TV investigative reporters Katie Davis and Parker Gavigan, URI alumna and retired print and broadcast reporter Dyana Koelsch and retired Providence Journal political columnist M. Charles Bakst.

The panelists discussed the implications of covering the 2020 election, how the pandemic has affected their reporting and how Trump has affected the perception of journalists during his presidency, among other topics.

Koelsch commented on how the distrust in the media has affected the national level greatly, but also now found its way into levels of local journalism. All of the panelists said that In the aftermath of the election, the media will continue to get a lot of negative feedback from readers of viewers, and part of being a journalist is dealing with this.

“Just from anecdotally people that I know, all they want to do is bad mouth the media,” Koelsch said. “They blame the media for not reporting things that are positive to them. Their expectation seems to be that if you do a story uncovering something that you somehow are targeting folks. I’m a little troubled by that from a local [journalism] perspective.”

Gavigan also said that at WJAR, the journalists are trying to show their viewers more of the behind-the-scenes steps they take to report their stories. This is done in hopes to dissolve some of the general distrust towards reporting in the U.S. According to Gavigan, this includes explaining to the people that they don’t simply take “no comment” as an answer on critical matters, and presenting to the audience their disciplined fact-checking and reporting efforts.

According to Bakst, he always viewed his role as a journalist as being tied closely to the role of the people themselves.

Davis echoed this sentiment, emphasizing that in addition to acting as a journalist, she has a lot of the same questions as the people.

“You, [as a journalist], are part of the community as well,” Davis said. “I always love to tell people that. I pay taxes as well. I’m a mom, too. I’m concerned about COVID and kids going back to school. I share these concerns that you have, and I’m a real person. I’m not a bot on Twitter that’s posting fake news all day. That’s not what I do.”

At the end of the Nov. 10 lecture, Dean of the College of Arts and Sciences Jen Riley announced that the Taricani Lecture Series will continue into the spring semester.