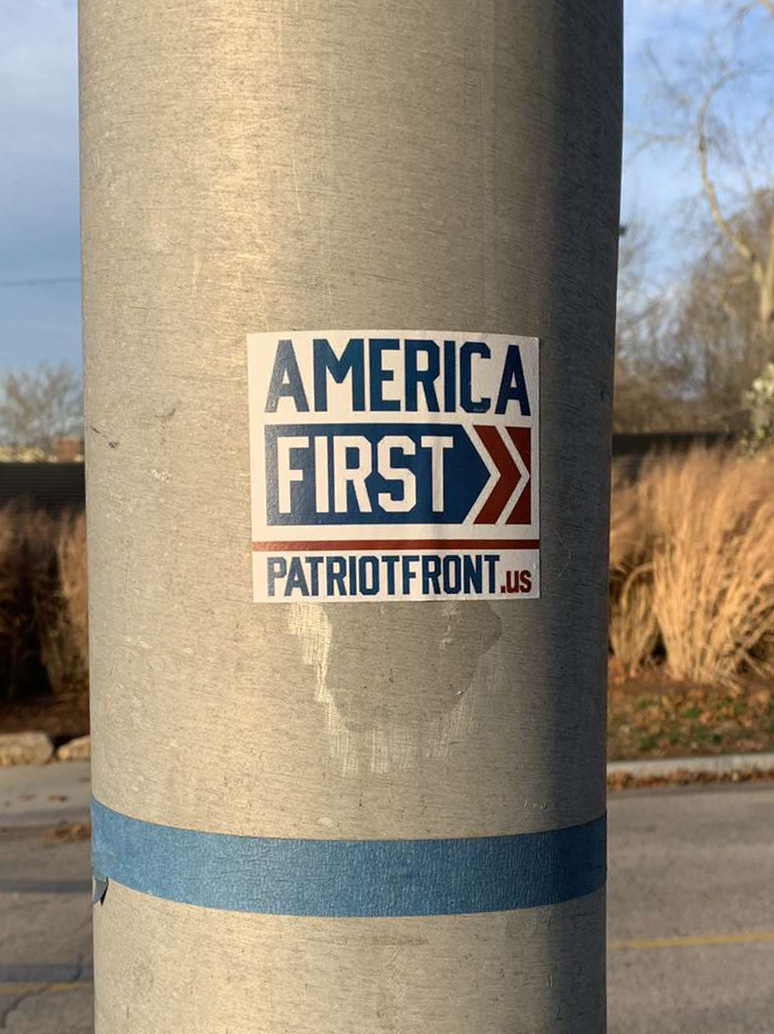 Stickers supporting a white supremacy group have been spotted around campus. Photo contributed by Riley Nedder.

According to anti-hate organization the Anti-Defamation League, Patriot Front is a is “a white supremacist group whose members maintain that their ancestors conquered America and bequeathed it to them alone.” The group self identifies as American fascists or American nationalists who focus on preserving American’s identity as a European-American identity. A branch of Vanguard America, an American white supremacist, neo-Nazi, neo-fascist organization, Patriot Front is known for distributing hateful propgranda via the internet and by distrbuting fliers, banners, posters and stickers.

The first call made was in response to two Patriot Front stickers found on posts outside of Browning Hall. According to Administrative and Satellite Campuses Commander Capt. Michael Chalek, one of the stickers had a QR code that led to the Patriot Front’s homepage.

“We did what we could and looked at our camera system,” Chalek said. “The problem occurs when you’re looking for somebody without a real good time frame, putting a small sticker on a post [when] a lot of the cameras are very high … you really couldn’t see it.”

A second report was recorded days later from a different student who indicated they  found a sticker posted on a pole on East Alumni Avenue near Upper College Road. According to Chalek, an officer then drove around campus in an attempt to find more stickers and discovered more postings outside of the Phi Gamma Delta fraternity house and on a pole located on Flagg Road, close to Upper College Road.

Chalek said video is still being reviewed around the incidents as it has been difficult to identify the culprits of these actions.

“I’ve looked at it myself trying to find these things … It’s almost impossible,” he said. “Somebody walks up, leans on a pole and you don’t know if they’re putting the sticker on or if they’re just leaning on the pole, so that’s very difficult.”

Chalek said the URI Police Department and Public Safety have been in contact with state and federal law enforcement officials to see if these acts are unique to URI. He said there have been several instances on college campuses throughout the country, some occurring after the 2020 presidential election results were announced on Nov. 7. However, Chalek said there have been no reported instances of violence or any massive recruitment efforts in the greater-Kingston area.

Although there is no serious threat of violence to the URI community, sophomore Riley Nedder who made a call to public safety about the sticker postings, believes the matter should still be taken seriously.

“Number one, it’s terrifying,” Nedder said about the stickers. “And number two, I’m not a visibly queer white woman, but I have a lot of friends who are Jewish and are people of color who are much more visibly queer than I am, and I am very afraid for them. Whether or not this is a harmless freshman trying to be funny and pull a joke, or if this is something more sinister, I wanted it to be known, especially for people who maybe saw more that I wasn’t aware of.”

Chalek said that the most important thing students should remember is to always report any activity, on or off campus, that may cause a disturbance to the URI community. However, he also noted the complications that potentially ensue when looking into the individual rights of those engaging in these types of actions.

“Everybody has the right to speak their mind as long as they don’t infringe on the rights of others,” Chalek said. “It’s not our position as a police department to go out and take a stance on an area one way or another.”

Chalek added that regardless of any conflicting beliefs or views, protecting the URI community remains the top priority of URI police and public safety.

“Our job is to make sure that everybody’s rights are protected and that’s what we will do,” he said. “Sometimes it puts us in a sticky situation.”

According to Chalek, all officers within the URI police department have been made aware of the incidents, and it will remain an open investigation moving forward.

“We’re going to keep up our vigilance,” he said. “And if this is a political statement, URI is the wrong place to make that kind of statement in my opinion … I don’t consider this to be a very fertile recruiting ground.”