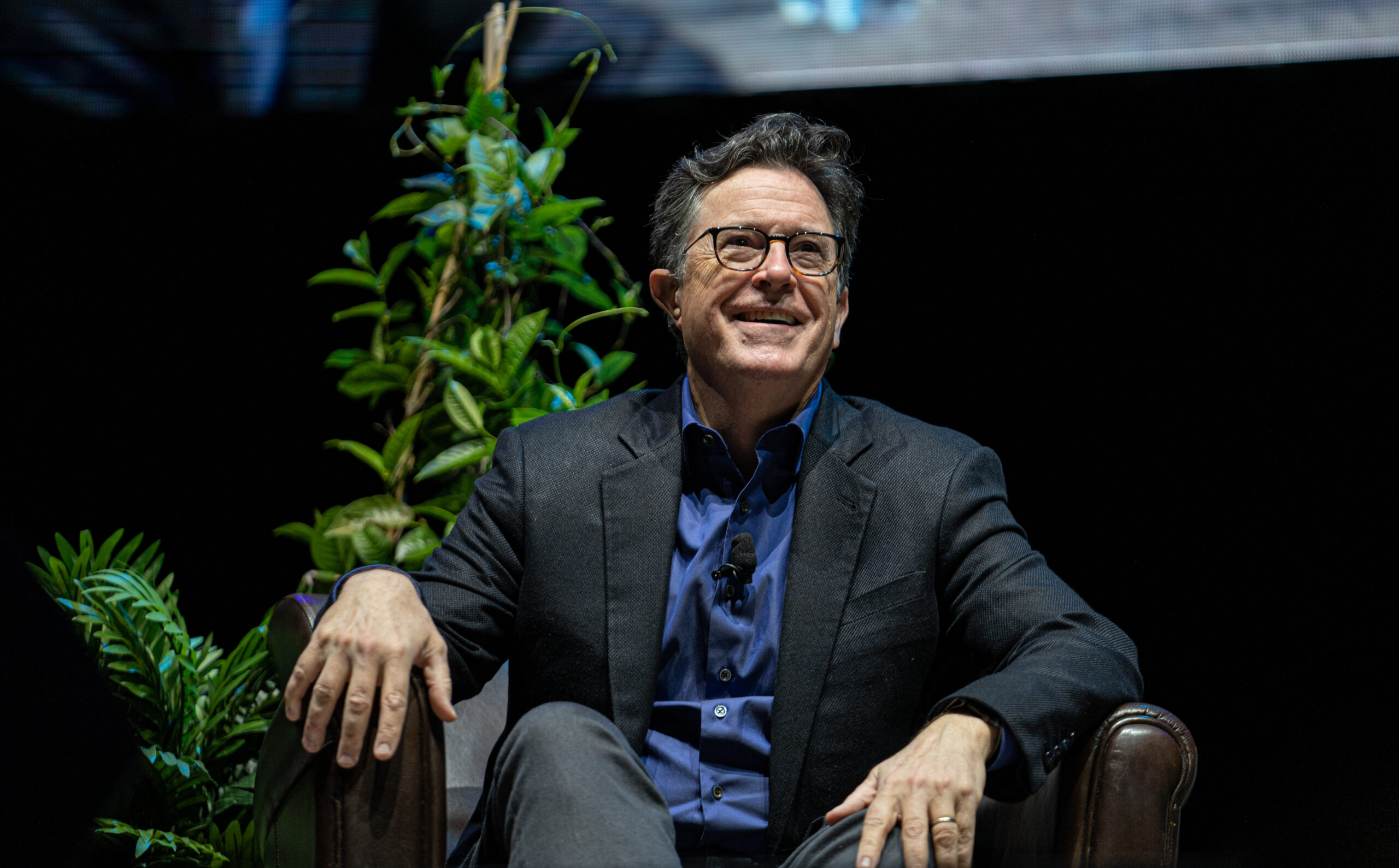 “The Late Show” host Stephen Colbert is interested in the business of awkwardness — one that most others might feel uncomfortable with.

John Dickerson, CBS political analyst and reporter, couldn’t sit through even 18 seconds worth of silence after being challenged to a 30-second attempt by Colbert.

The two were brought together in the Ryan Center during Alumni & Family Weekend for a conversation hosted by the University of Rhode Island’s Student Entertainment Committee (SEC) on Saturday, Oct. 2.

Singing in the elevator or walking like a pooping squirrel across the street as an adult are just two ways in which Colbert said he has trained himself to be comfortable in awkward situations.

“Maybe because I was an awkward kid,” Colbert said in an effort to pinpoint what inspires these situations. “I was a very, kind of alienated and sort of outside the social orbit of my school.”

Dickerson tried throughout the night to get Colbert to open up about his childhood on James Island, South Carolina as the youngest of 11 children.

Growing up, Colbert said that once all of the children in his home were accounted for by his parents, they were allowed to stay up and watch movies or television shows after they went to bed.

A self-proclaimed “free-range child” as the youngest of his siblings, he stayed up late and watched “Man in the Wilderness,” wherein a man is mauled by a grizzly bear. This, Colbert said, ultimately led him to holding onto his fear of the creatures.

In his journey to the bus stop for school, Colbert had to travel through the woods near his house and feared that a bear might maul him like the man in the movie.

Colbert said he approached his father, a doctor, to discuss this fear. His dad told him that “modern medicine could sew you right up,” in response, to which the audience and Dickerson roared in laughter.

In an effort to prepare himself for the seemingly inevitable bear attack of his youth, which never came to fruition, 8-year-old Colbert ventured over to the neighbor’s house to learn from 16-year-old Gator Strong how to throw knives.

Throughout the rest of the interview, Dickerson would return to this Gator anecdote in efforts to get Colbert to show some of his southern accent. This somewhat worked, as Colbert emphasized how southern the Strongs, originally from New Orleans, were.

While Colbert takes pride in his upbringing, he rid himself of his southern accent in theatre school at Northwestern University. He transferred there in his third year of college after attending his first two at Hampden-Sydney College.

When referencing his first two years of college and social life then, Colbert spoke of himself pronouncing his name as “Col-burt,” which Dickerson then probed him about.

This change happened on a flight to Chicago to attend Northwestern, where Colbert had a conversation with his seatmate about changing the pronunciation of his last name from an American “Col-burt” to a French “Col-bear.”

This was a change his father had considered himself, but Colbert’s grandfather had said he would feel that others might perceive this pronunciation change as his son not wanting to be associated with him. Colbert joked that he and his siblings are divided between the two pronunciations to this day.

Last year, he returned to South Carolina during the COVID-19 pandemic quarantine period when “The Late Show” was unable to film in the historic Ed Sullivan Theater in New York City. Here, his family became his show’s crew in uncertain times; his first week of remote shows being filmed from his bathtub by his wife Evvy Colbert on an iPad.

After the first few shows during this period, “The Late Show” creatives changed up their process of filming and broadcasting the show.

The satellite truck that found a home on his lawn for the next five months led to the death of a patch of grass on his lawn, according to Colbert. Ever-grateful to his family for their help during this time, Colbert also credited “49 percent” of his show to the work done by his crew behind the scenes.

He even got choked up during his recent speech at the Emmy Awards when accepting the Variety Special (Live) award for his broadcast during Election Night 2020, as pointed out by Dickerson.

Colbert adapted to these remote shows and interviews by leaning into the awkwardness once again over Zoom.

“As soon as someone would appear on the Zoom screen, I would just start talking and 10 minutes later, I’d say ‘thank you for being here,’” Colbert said. “And then they got mad.”

He went on to say that these guests would “get mad” because they wanted to put on some sort of performance for the show. Colbert found out early on that “in this new COVID world,” the old format didn’t work.

The nuances of quarantine that the nation faced were not lost on the Colbert family, as their eldest daughter on the second day said they were “roommates” and made a chore wheel for everyone to follow –– which didn’t last more than two weeks.

Now an empty nester, Colbert said he was grateful for the time that quarantine gave him with his youngest sons, who were high school and college seniors at the time.

Colbert gave some retrospective advice for his younger self at the event, which seemed to resonate with the audience who gave him a standing ovation to open and close the night.

“Don’t worry, it’s not gonna help,” Colbert said, likening the worrying to monsters of abstraction created by your own mind. “They keep you from actually doing the thing you want to do because you become paralyzed by the little monster of abstraction.”