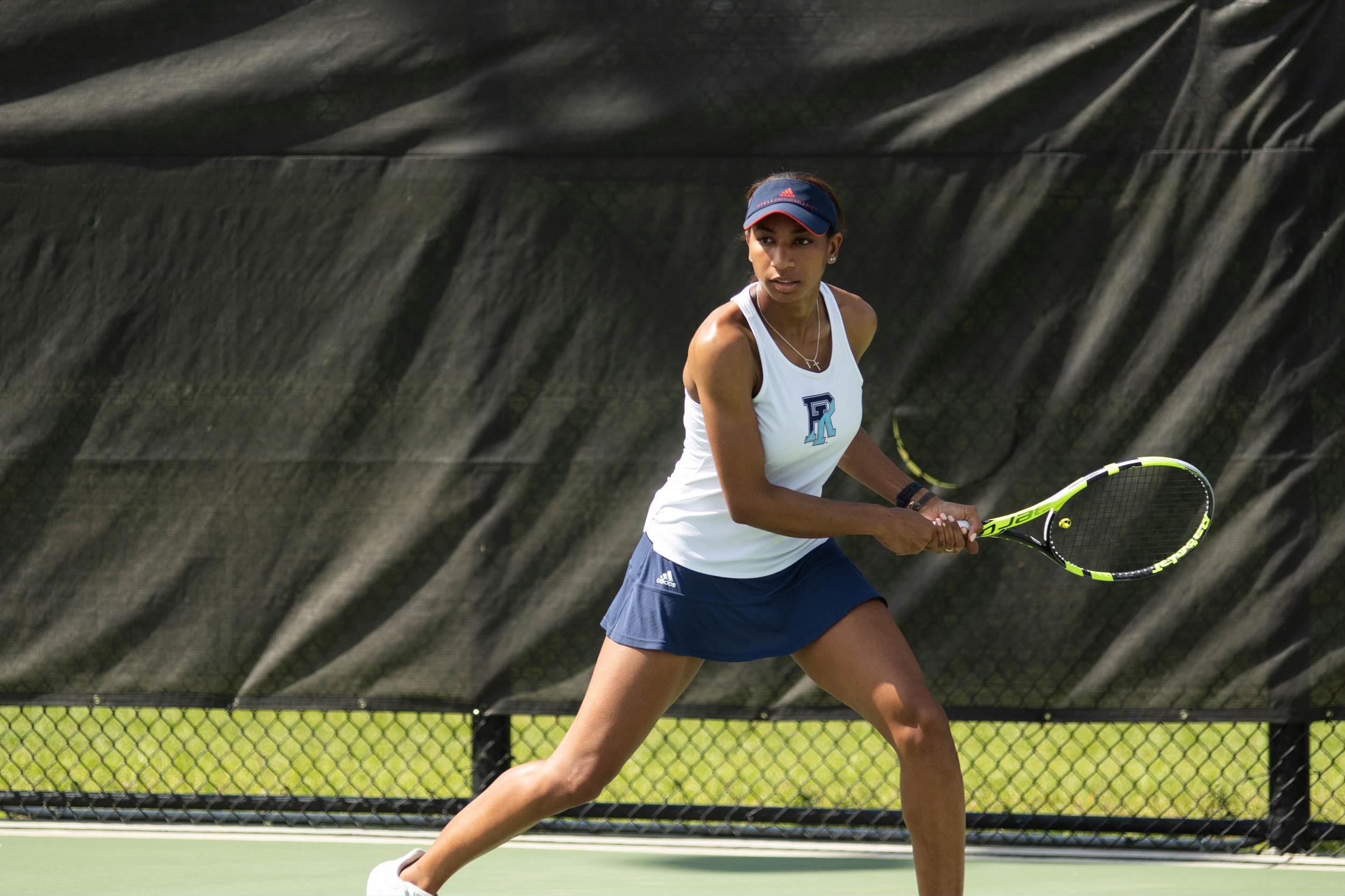 Erin Chratian and her sister Sydney gave the Rams their best performance of the weekend. Photo Credit: gorhody.com

The University of Rhode Island Tennis team wrapped up play in the ITA Northeast Regional Tournament in West Point, New York last weekend, with Erin and Sydney Chratian advancing as far as the round of 32.

Along with the Chratian sisters, teammates Nadia Rajan, Tiara Higuchi and Paulina Loredo represented Rhody as they competed against some of the top competition in the nation.

In the opening round, all but one player for URI was able to advance to the next round in singles play, with Loredo narrowly losing her match in three sets. Rajan advanced off of a first-round bye, while Higuchi took her first match 6-3, 7-5. Sydney Chratian was able to outlast her opponent in three sets, 1-6, 7-5, 10-7, against Bryant’s Caitlyn Munson, an in-state rival. Erin Chratian also breezed by 6-1 6-1 in a match that featured another Bulldog in Sarah Hickey.

“It’s a great thing for them because it really helps them measure their talent,” Head Coach Val Villucci said. “For them to experience it first-hand and to be in a pressured environment, they just responded very well.”

Loredo came up just short 6-4, 3-6, 10-8 in a three-set battle. Both doubles teams for URI were also knocked out to open the tournament, with the combo of Loredo and Sydney Chratian losing 8-6 while Erin Chratian and Rajan dropped their match 8-2.

Rhody was down to just two players in singles following the round of 64. Rajan lost her first match, 6-2 6-2, while Higuchi was held in check 6-0, 6-3. Both players lost to Harvard opponents, establishing a trend of success for Ivy League players in their matches against Rhody.

Regardless of the result, Villucci believes that being able to experience competition outside of the Atlantic 10 will make a big difference for how her team performs later on.

“Any competition is good competition,” she said. “The more matches that you play, the more experience you’re going to have. Even if we’re not on the winning side all the time, it just allows us to examine what we have to continue to work on.”

Both Chratian sisters were able to win their second matches and advance to the round of 32. Erin took her match 6-4, 6-2, while Sydney pulled out a 7-5, 6-3 victory against UMass and A-10 rival Anna Napedly.

Sydney Chratian’s perseverance has stood out to Villucci to this point. After a lopsided loss in her first set of the tournament, she bounced back to win four consecutive sets through two matches.

“She just has the will to win,” Villucci said. “Even when she’s not playing her best, she’ll figure out a way.”

As for Erin Chratian, Villucci notes that she’s “getting back to form” and starting to pick up off of her success last season.

Rhody’s stay at West Point ended early on Sunday with the Rams’ final two competitors unable to advance to the next stage. In the round of 32, Erin Chratian was defeated 6-0, 6-2 against another Ivy League opponent, Yale’s Rena Lin. Sydney Chratian also fell 6-4, 6-1 in her final match.

URI will be back in action this weekend, first facing Monmouth on Friday in a scrimmage-like match that has served as a tradition of sorts for both squads over the years, according to Villucci.

“We have a good relationship with the coach and the team, so it’s a nice learning experience,” she said.

The Rams will also host the Rhody Doubles’ Tourney over the weekend, an opportunity for the team to improve in an area that they have struggled in up to this point. Providence College, Bryant and Quinnipiac will all join Rhody and Monmouth at the URI Tennis Complex on Saturday afternoon.