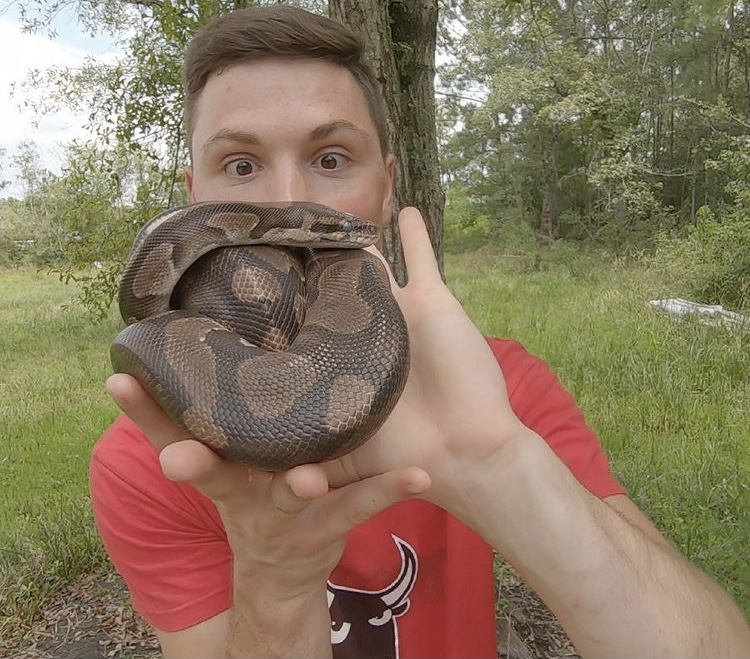 Learn about nature on ‘Going Wild with Satchel Snow’

URI Senior taking his interest in wildlife and conservation to YouTube

How can you explore wildlife, learn about an alligator, a snake and a frog, without even leaving the couch? “Going Wild with Satchel Snow” is a YouTube channel created by a University of Rhode Island student who is full of fun facts and overflowing with passion about these creatures.

In October 2020, Snow decided to share his passion for wildlife and conservation on YouTube with “Going Wild With Satchel Snow.”

Snow is a senior studying wildlife and conservation biology and communications. His interest in animals started at a young age, and he said it has only grown since then. One of his long-time inspirations in the field was Steve Irwin because of how passionate he was about animals and his high energy spirit. Snow said that his mom recorded all of Steve Irwin’s shows on tapes and it was one of the only things that he watched.

It was his parents who pushed him to start the channel, as they knew how passionate he is about animals and conservation.

Before the launch of his channel, he did a lot of planning during his summer internship at Gator Country, a sanctuary home to alligators, crocodiles and many different reptiles located in Texas.

“I was working with alligators, venomous snakes and all kinds of stuff, so it was a really good experience,” Snow said. “I was just filming with all my buddies down there the whole summer basically so that’s where all that footage is from.”

Once school started back up, it became harder for him to keep up with the channel because of how time-consuming video creation can be. Because of this, he has expanded his platform to Instagram and Tik Tok. He has found that it is easier for him to film quick 30-second videos on this platform and it has allowed him to grow faster than YouTube.

“My friend Seth and I have been going out and filming on his phone,” he said. “I posted a video on Sept. 9, and that video is at almost two million views right now.”

He said that he still plans to keep the YouTube page going, but for now, Tik Tok provides him with more opportunities to grow.

Seth Ketler, a sophomore studying supply chain management, has worked with Snow by filming content and taking photos, which Snow said has made him a great partner for his channel.

At first, Snow said he was not as confident in front of the camera as he is now and that it took a lot of time and practice to get comfortable on screen. Most of what he learned about working on camera came from his boss at his internship that once had a television show, who taught him how to keep his energy up and how to bring his passion to his videos.

“At the end of the day, it’s just about getting experience doing it,” Snow said. “Now it’s natural, but at first, it was really weird.”

He hopes that he can keep increasing his follower count on his platforms and get as many people engaged with wildlife and conservation as possible.

Snow hopes to continue doing this type of work in his future career path. He said that he hopes to work in television or some sort of streaming service.

“If I can get one person more interested in wildlife or conservation, especially with climate change, that’s all I’m trying to do,” said Snow.