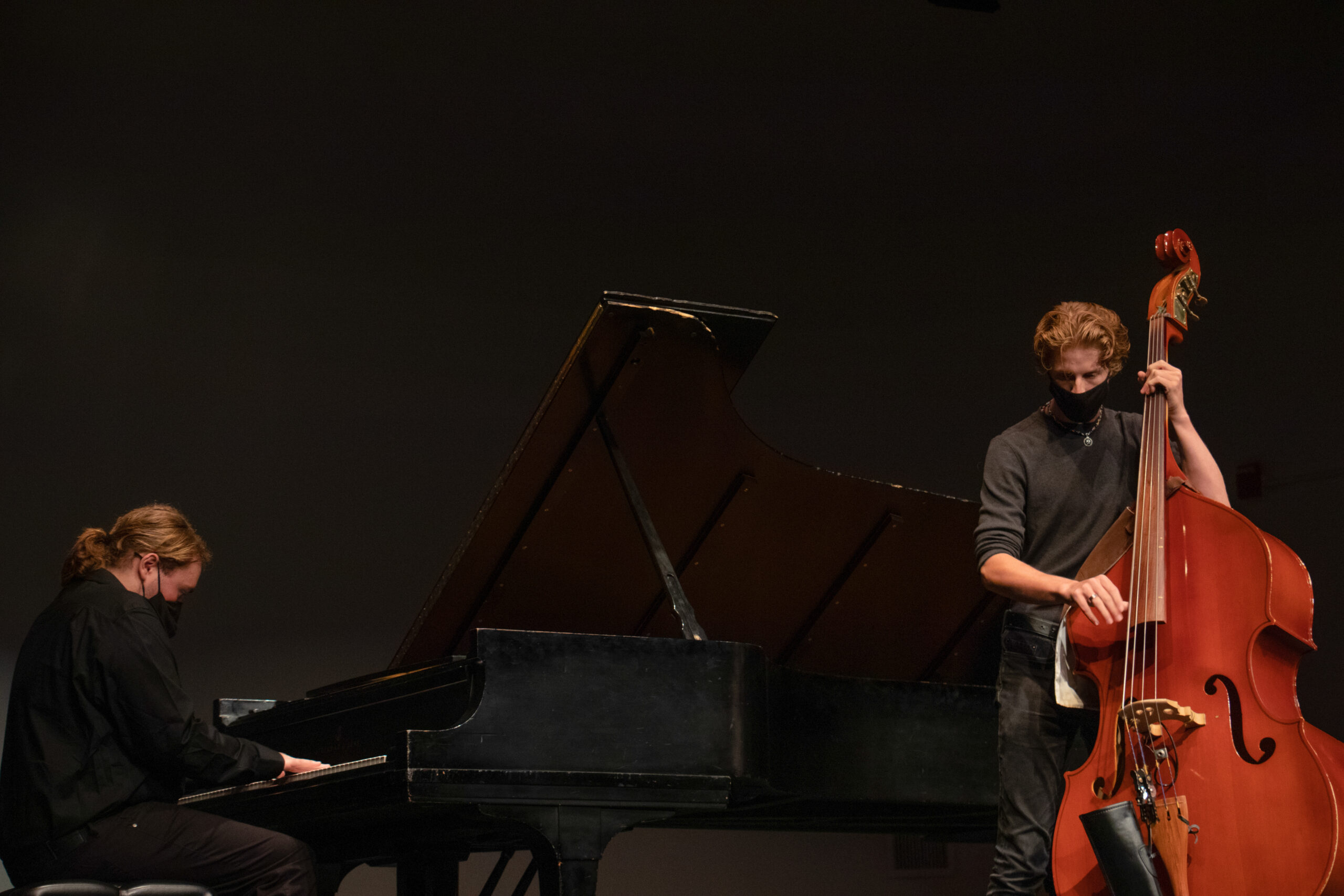 On Friday, Oct. 8, around 80 music majors and minors gathered in the Fine Arts Center Concert Hall to attend the fourth music convocation of the semester, consisting of three student performances followed by an insightful Q&A session with the musicians.

The first piece to be played was Dizzy Gillespie’s “Woody’n You,” performed by Ted J. Kutcher III on piano and Wyatt Crosby on bass. The piece was an expertly played, upbeat and engaging start to the convocation. This performance was particularly gripping to watch due to the musical chemistry between the duo.

Speaking on the challenges in the jazz world, Kutcher said, “you work with musicians that you barely know, sometimes you play in clubs and you don’t know the guys you’re playing with.”

Kutcher and Crosby explained that for this performance, it was Crosby who was listening to Kutcher play, and following his speed. Kutcher noted that there is always a connection between jazz musicians when they play, varying in depth in relation to how well they know each other and how they all play.

According to Kutcher, he usually plays in combos of quartets or quintets, but figured that he’d play in a duet this time in order to work on his time feeling and technical skills and to, “be able to play without the comfort of having drums or a guitarist to back him up.”

The second performance was by Nick DeFranzo, who performed Astor Piazzolla’s “Oblivion” on guitar, arranged by Nadja Kossinskaja. The audience was so immersed in this piece that you could have heard a pin drop in the auditorium.

DeFranzo described the piece as the player drifting from oblivion into remembering, and then falling back into oblivion again, with his performance reflecting this. During the Q&A, he stressed the challenge of this contrasting volume throughout the piece, particularly due to the difference between the acoustics of the small room where he practiced and the concert hall where he performed. Despite these challenges, the performance completely captivated the audience, with one student noting that it didn’t feel like they were in a big room at all, and that it felt incredibly intimate.

Whilst DeFranzo was the only musician performing solo during the convocation, he appeared to be incredibly calm and collected, which is no surprise as he has been playing guitar since he was just 7 years old.

“It’s comparable to the pain you [feel] when you’re getting a tattoo,” DeFranzo said regarding nerves while performing solo; a comment that got relatable laughs from the other musicians.

The third and final performance was Debussy’s “Sarabande,” performed by Andrew Liguori on tenor saxophone and accompanied by Dr. David Gilliland on piano. The performance was a great end to the convocation and was met with cheers from many students in the audience.

Liguori described “Sarabande” as the “most deceiving piece I’ve ever played in my entire life” and in the Q&A discussed the difficulties of playing with a higher register during the piece. He explained that students who are performing get three hours of rehearsal time per semester with their accompanist, in his case Gilliland, which he described as “anxiety-inducing.”

He said that the first sessions practicing with an accompanist are always tough, and that it takes a few sessions to get it right, but there is “always that one time where it just works and really comes together.”

The fifth music convocation of the semester will be held Friday, Oct. 15 at 1 p.m. in the Concert Hall of the Fine Arts Center.