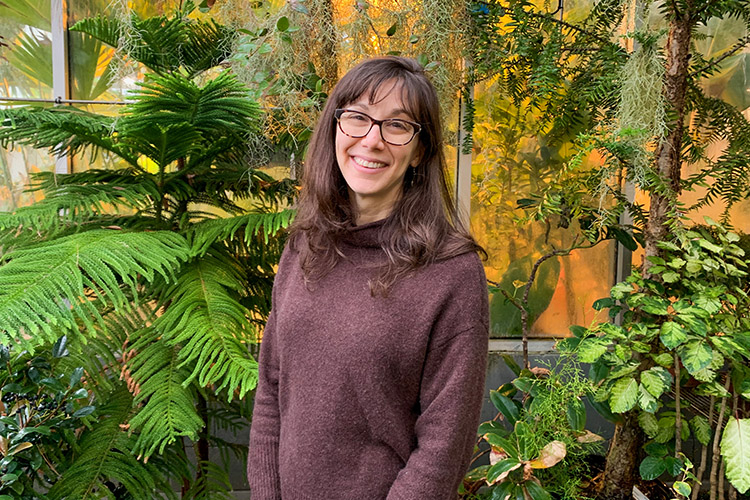 This week the Honors Colloquium series featured Chelsea Rochman of the University of Toronto to talk about plastic pollution in the ocean. PHOTO CREDIT: utoronto.ca

The seventh installment of the University of Rhode Island’s fall 2021 Honors Colloquium series, “SOS: Sustaining Our Shores,” focused on a great challenge facing our oceans that not only scientists are familiar with.

Plastic pollution is an issue that many people outside of the study of biological sciences know about, making it that much more important to prevent in order to save our oceans.

“The Colloquium focuses on our shores and our seas because we live in the Ocean State,” Davies said. “We’re surrounded by an amazing coastal recourse that presents both significant challenges and opportunities.”

One of the greatest plastic pollutants of our ecosystem is a pollutant that only started to gain significant attention about two decades ago — microplastics.

“There’s no better subject to talk about than microplastics and plastic pollution,” Davies said. “Today we’re really talking about a global challenge that’s impacting multiple people around the world  — the issue of plastic in our environment. It’s a ubiquitous material of the modern economy. It’s highly important to us, but it also represents challenges as well.”

While microplastics and plastic pollution are an issue that has garnered increased media attention in recent years, it was not always like this. Rochman dove into how this changed over the past 50 years.

The first scientific focus and breakthrough on microplastics was made in a 1972 article, “Plastics on the Sargasso Sea Surface,” published by Edward Carpenter, a scientist and professor of biology at San Francisco State University. Rochman said that Carpenter wrote about his findings of microplastics in both the water and fish of the Atlantic Ocean. However, the article did not get much attention, and Carpenter did not continue pursuing the subject.

Another turning point in public attention on plastics was in 1997 when Captain Charles Moore was returning home after a yacht race in the Pacific Ocean and discovered the Great Pacific Garbage Patch, which is a section of the Pacific Ocean that contains a floating island of approximately 3 million tons of plastic.

This article was a point of intrigue for Rochman to join the research field on plastic pollution as an undergraduate student.

“For me, it all started with the garbage patch,” Rochman said. “When I was in undergrad, I came across this article by Ken Weiss in 2006, so about 10 years after Captain Charles Moore discovered the garbage patch. This article won a Pulitzer prize in the [Los Angeles] Times describing the garbage patch to the world and it got me really interested in it in graduate school.”

The kickstarting of concern for the amount of plastic pollution we have in our oceans didn’t truly start until the 2000s in tandem with research on plastic pollution provided by scientist Richard Thompson, according to Rochman.

Microplastics circulate in our ecosystem in many ways. Plastic pollution comes from many different sources, including clothing after it has been washed and worn, car tire fragments, paint from roads, buildings, ships and fishing debris.

“We don’t need science to understand, we need to push policies,” Rochman said.

If we want to save our oceans from their “inevitable destruction” by 2030, Rochman said that a few policies need to be undertaken simultaneously and immediately.

First and most obviously, Rochman said that single-use plastic needs to be eliminated or reduced drastically in our everyday lives. He also said that the government needs to take action in reducing the production of new plastics and that a globally harmonized recycling system needs to be set in place. With this, she said recycling technology needs to be upscaled and innovated. Finally, she said that clean-up actions to get rid of the plastic already in our ecosystem need to be prioritized.

So far, Rochman said that the United States has banned the use of microbeads since 2015, according to the FDA website, which are microscopic pieces of plastic that can be found in many beauty products and can get washed into the environment over time. This is harmful because when these microbeads are washed into the environment, fish and marine wildlife will ingest them and this makes its way up the food chain and onto our plates.

She also mentioned that California has put a more stable and strict recycling program in place to reduce plastic pollution from when plastic is recycled incorrectly.

For information on more topics like this, interested members of the community can attend the remainder of the Honors Colloquium series, which is held every Tuesday in Edwards Auditorium at 7 p.m.