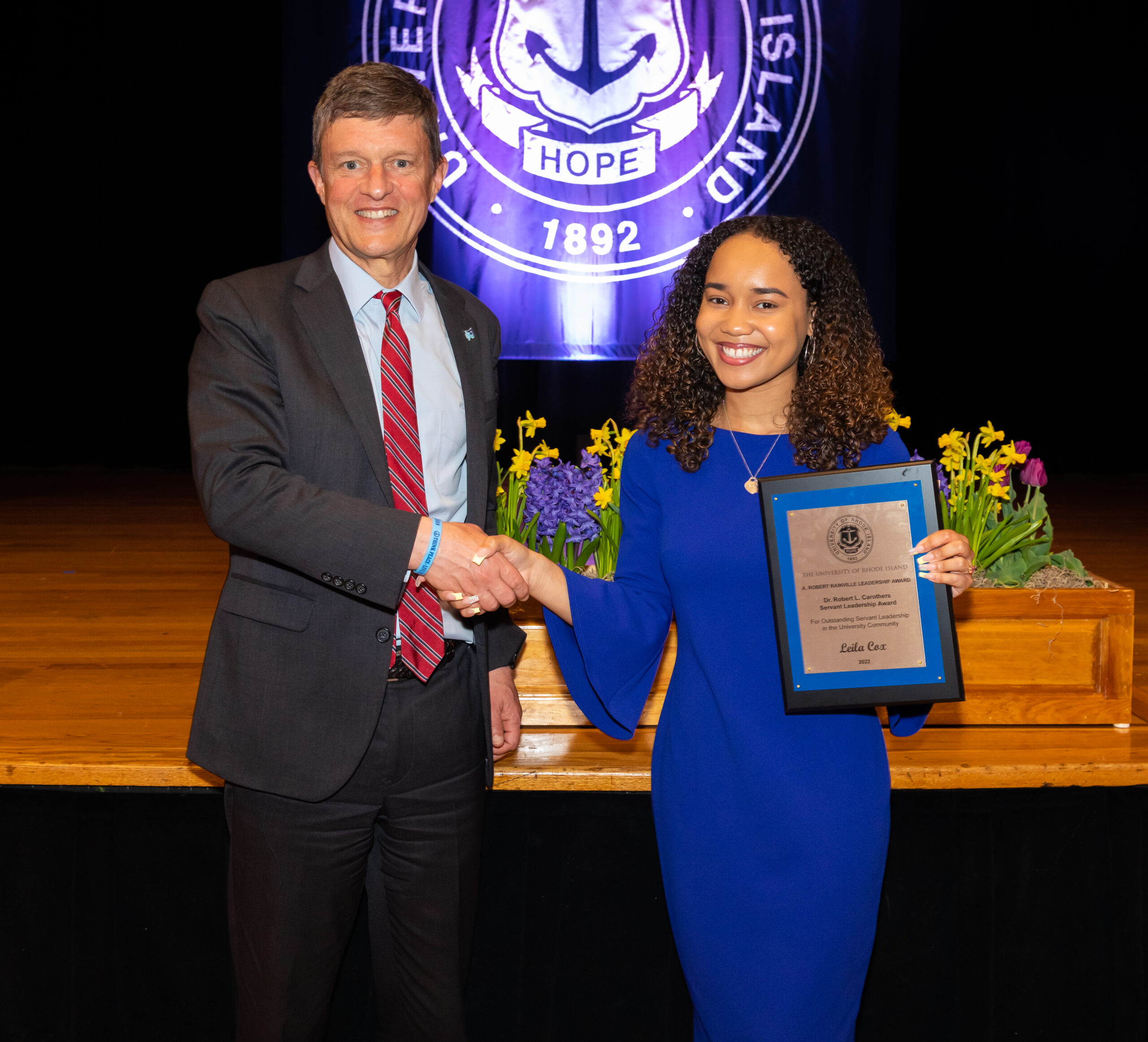 This Tuesday, the University of Rhode Island’s 34th A. Robert Rainville Leadership Awards honored dozens of nominees who have displayed leadership within the campus community, awarding three individuals and one organization that stood out among the rest.

Rainville held multiple leadership positions in Student Life and Student Activities during his time at URI, which is why the University decided to honor his name with this award ceremony.

According to the event program, Rainville emphasized “integrity, intellectual achievement, ethics and commitment to the service of others” and was consistently recognized for his level of excellence.

Maureen McDermott, the assistant director of student involvement, opened the ceremony, welcoming nominees and their families, the selection committees and the rest of the guests.

President Marc Parlange then recognized all of the nominees, their accomplishments and how pleased he was that the University was able to hold the event in person for the first time in two years.

“You are the leaders, the doers and the trailblazers that make the work that we do as your teachers and supporters so exciting and incredibly rewarding,” he said. “Thank you to all of you for everything you’ve done for the University, the warmest congratulations to all of you tonight.”

Lindsey Moore presented the first award of the night, the Employee Excellence Award. Out of 16 nominees, there were three finalists, Michael Deus, Aisling Macaraeg and Ashley Tai.

Tai, a junior cell and molecular biology and Chinese double major, was awarded the Employee Excellence Award.
“As an underrepresented student myself, I work to empower others while simultaneously breaking down barriers and stigmas while educating and expanding knowledge,” Tai said in her acceptance speech.

She said that as the administrative assistant to Michelle Fontes, assistant dean of diversity, recruitment and retention, she develops events and initiatives to support students in the College of Environment and Life Sciences at URI.

She also works as a junior lead biology tutor at the Academic Enhancement Center.

URI students Catherine DiPaolo and Kaitlin Siegle then presented the Team Excellence award to the Society of Women Engineers (SWE) for the effective leadership and work they have done for young women in the community.

Jessica McLaughlin, a junior member of SWE, said that their organization goes beyond the campus and focuses on inspiring young girls in STEM.

“Having a role model in STEM is so important; especially one you can relate to, one that you can see,” she said.

McLaughlin said that in the future, they hope to see the organization grow and diversify more.

“Just because it’s the Society of Women Engineers, doesn’t mean you have to be a woman engineer,” she said. “It’s all about supporting women in engineering.”

Anti-Racist Education and RhodyTHON were also finalists for the Team Excellence Award.

Julia Al-Amir, Leila Cox and Alison Hornung were the three finalists for the award.

The honor went to Leila Cox, a senior communication studies and journalism double major with a minor in leadership studies.

Wilder said that Cox stood out to the selection committee because not only is she the co-founder of the Black Student Union at URI, but she has worked hard at making the Multicultural Student Center a safe haven for students. In addition, they appreciated how she recognized her mentor, the late Dean Earl Smith, during her interview, accrediting him for the guidance he has provided her.

“I think what stood out was my persistence,” Cox said. “I’ve been fighting for more resources and more attention to the lives of Black and brown students on campus. My ultimate dream, like I said earlier, is to have my own talk show one day and continue to keep having these crucial conversations.”

Mark Dreher and Audra O’Toole presented the last award of the night, the Student Leadership Award.

Julia Al-Amir was named a finalist once again, alongside Jacqualine Cerbone, Sydney Chabot and Markeem Rodrigues. Cerbone, a senior, was awarded.

“She was able to reflect on her leadership positions at URI, noting the amazing experience that came along with it, as well as addressing some underlying issues in hopes to make the programs better for others,” O’Toole said.

In addition, O’Toole said that Cerbone spoke critically about the struggles that URI student leaders face, proposing solutions to make the experience better.

“When I was coming into this and when I was nominated, I kinda said to myself ‘I don’t need an award to know that I’m a good leader,’ but the fact that I actually got this award feels really good,” Cerbone said. “What’s more important to me is that in my application, I was very honest… I think there are a lot of problems within student leadership, but there is also a lot of good that comes out of it.”

Ending the night, McDermott once again thanked all who attended and made a few closing remarks, congratulating all nominees and recipients.