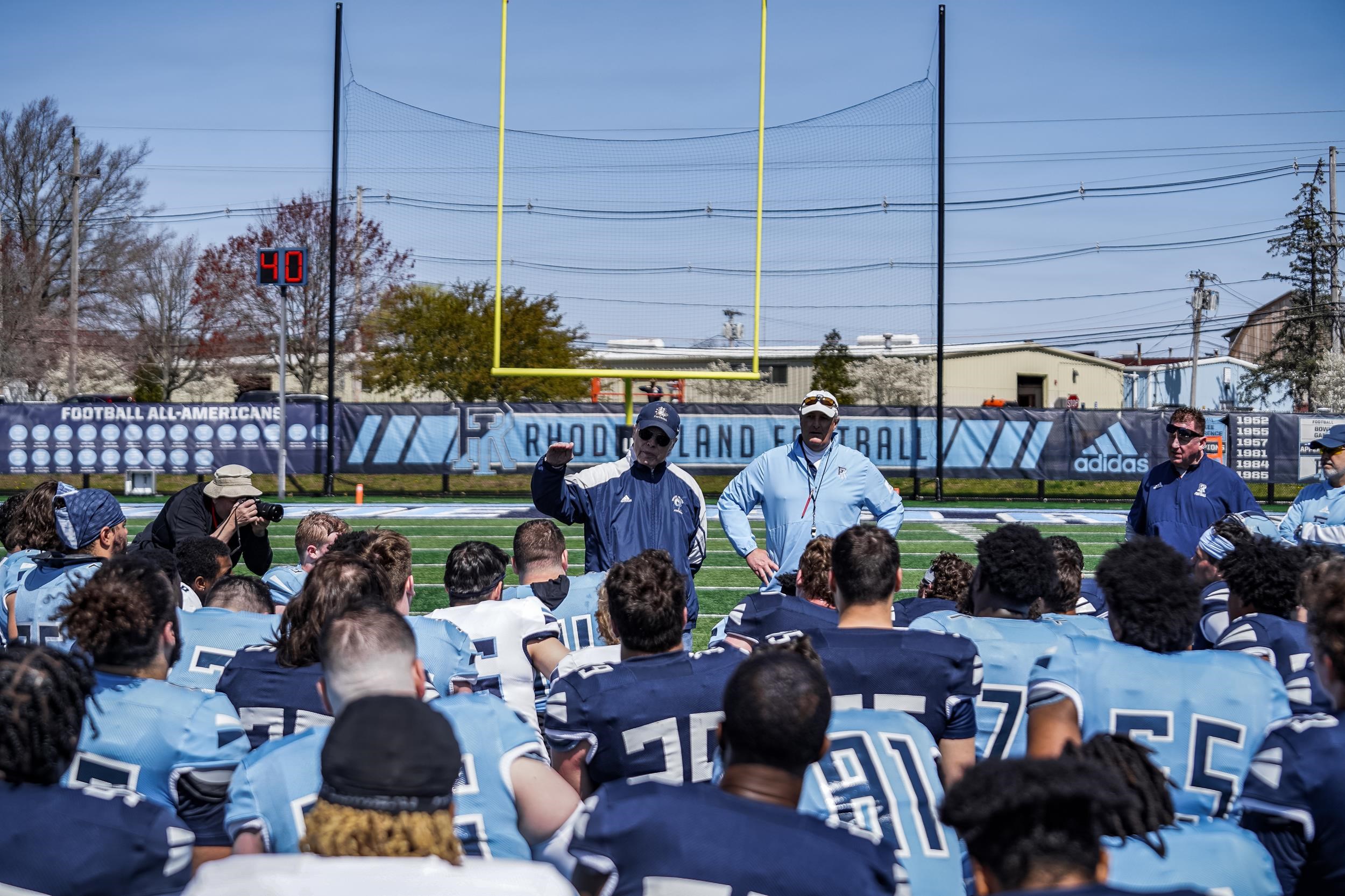 With the sun shining at 10 a.m. last Saturday morning, fans filed into the bleachers at Meade Stadium for the first time since November to see the football team play their Blue-White Spring Game.

Unlike a regular season game, this game used a modified scoring system to keep things competitive. The scoring on the offensive end was as usual, with the addition of a two-point tally for a “big play,” which is any gain of 15 yards or more.

The scrimmage went for two-12 minute periods, giving all players an opportunity to see the field. At the end of the 24 minutes, the defense came out on top by a score of 49-35.

Several starters for URI were not suited up for the game. Quarterback Kasim Hill, cornerback Antonio Carter II, running back Kevin Brown Jr. and defensive lineman Dylan Brown were among the players who were not seen in action.

However, with several players missing, there was even more of an opportunity for the younger players to shine, including who is fighting for the backup quarterback spot.

“We know what we have as a starting quarterback, but we wanted to see who would compete to be a backup,” Head Coach Jim Fleming said.

The coaching staff got a look at all three backup quarterbacks as Kennique Bonner-Steward, Jackson Burkhalter and Trevor Nored all saw the field.

Burkhalter started the game and went 4-for-8 with 37 yards passing; however, it was Bonner-Steward who threw the lone touchdown pass of the day, finishing with 97 yards on a 71 percent completion rate. Freshman Trevor Nored finished off the game throwing 2-for-6 for 11 yards, but showed promise in his evasiveness and mobility in the pocket.

“It’s always important [to give the younger guys reps],” Fleming said. “You’re in game uniform and you have an opportunity to play in front of your parents and get them out there with some reps and give them a taste of game action.”

Even though URI’s offense performed well in their own right, Rhody’s defense came out on top, mostly due to the production of Westley Neal Jr. Neal not only recorded 3.5 tackles, but also delivered the play of the game, a rare blocked field goal.

Even though Neal had a tremendous day on the field, Defensive Coordinator Jack Cooper stressed that their defense does not play around one player.

“We’re a bi-committee defense.” Cooper said. “We don’t just ride with one guy, we’ve got to play with all 22.”

Cooper’s “bi-committee defense” was firing on all cylinders, seeing contributions from the whole defense, resulting in a dominating second quarter to pick up the win.

Henry Yianakopolos and Johnny Alvarado led the team with 4.5 tackles, and Cole Brockwell and Gabe Salomons each had two tackles for a loss along with a sack. Emmanuel Gomes broke up two passes and Michael Strachen recorded an interception.

The Rams officially begin the 2022 season when they visit Stony Brook on Sept. 1 and return for their home opener on Sept. 17 against Delaware.