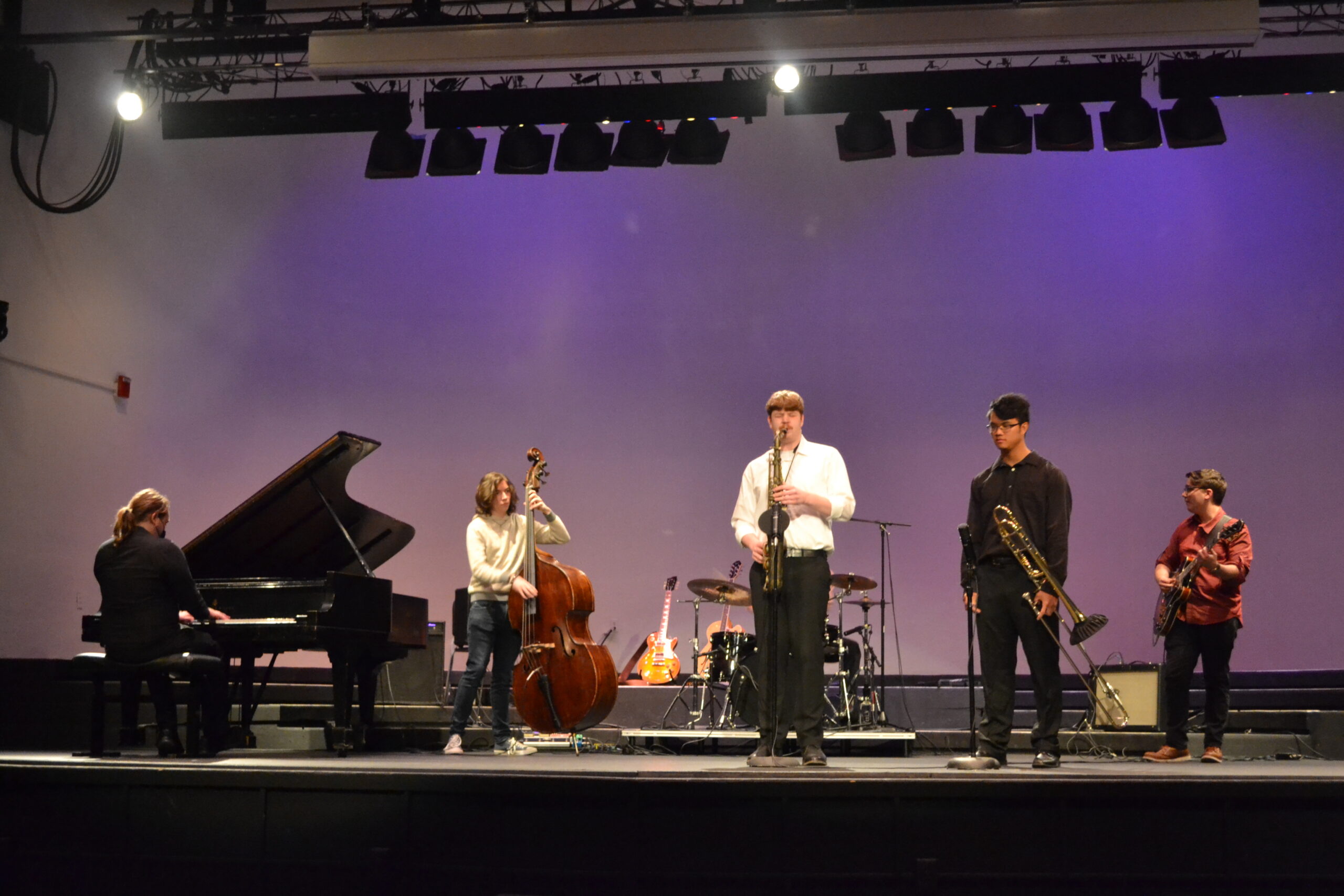 As the concert began, Emmett Goods, assistant professor of music and teacher in jazz trombone, thanked everyone for coming out for the evening.

“This is the first semester we’ve had this many jazz combo concerts,” Goods said. “That means our program is growing. We have five groups so it just makes more sense to split them up into two nights.”

The first group of the evening was the McKenna Group which consisted of six members: Juda LaRoche on the tenor saxophone, David Canavan on the trombone, Ryan Chauvette on the bass, Jonathan Cabral on the guitar, Brent Moynahan on the drums and cymbals and Ted Kutcher III on piano. They were directed by artist and teacher in jazz saxophone John McKenna. They performed two pieces, “Introspection” by Thelonious Monk and “Amsterdam After Dark” by George Coleman.

The group began with “Introspection.” This piece was reminiscent of a classic spy thriller. The mysterious and gloomy tones made the audience anticipate every coming note. In this piece, every member had a solo.

The second piece was “Amsterdam After Dark” by George Coleman. The group slowed it down for this one. Solos from Ted Kutcher III on piano and Brent Moynahan on the drums changed the course of this composition. The piece obtained a more sharp, even dangerous, mood. The slow and romantic start gave way to an angsty middle, followed by the breathtaking climax, which, at the end, returned back to the calm rhythms.

The second group was Hot Rod Deluxe, which consisted of five members: Bradley Schmidt on bass, Aiden Rogler on guitar, Nick Pepe on guitar, Logan McCue on drums and Armando Mirabal on piano.

The first performance from the group, “Strasbourg/St. Denis,” began with light unobtrusive rhythms. Armando Mirabal’s piano solo gave this performance a very energetic direction. Members of the audience even started dancing along in their seats.

Next was “Sunday Morning.” The fragments of the piece repeated over and over as if the tune itself was looking for something.

The final piece was “I’ll Take Les.”  From the very beginning, this group put the audience in the center of passionate sounds. The contribution of Bradley Schmidt on bass was the main source of this mood. This piece left the audience very excited as they started to move along.

Heriell Muñoz, a member of the audience, was thrilled to be at the concert with his friends. They came to support the URI Jazz Department.

“I love jazz,” Muñoz said. “I played upright bass in school growing up, so seeing my fellow students playing brought some nice memories back to me.”URI Music will be holding performances throughout the rest of the spring semester. For a full list of upcoming events visit the music department’s website.