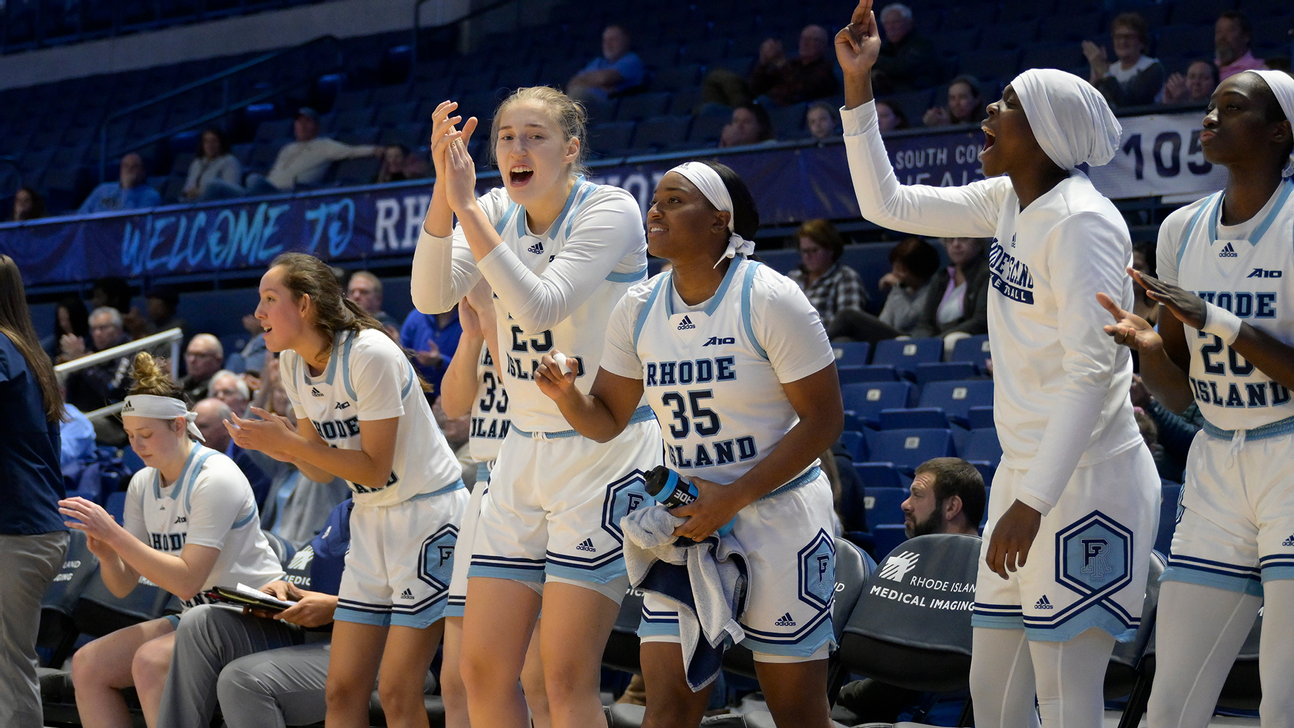 URI women’s basketball capped off a successful homestand this week, as they extended their winning streak to eight games and remained unbeaten at home with wins over Buffalo, Maine, and Hartford.

The action started on Thursday as the Rams returned home to face the University of Buffalo at the Ryan Center, defeating the Bulls 71-56. The Rams had trailed at the half in their previous two home games going into Thursday’s matchup, prompting Head Coach Tammi Reiss to emphasize the team’s need to start games stronger.

That was the case on Thursday, as the Rams jumped into a 12-0 lead in the opening minutes to take control of the game. Buffalo eventually got on the scoreboard late in the first quarter, but it wasn’t enough to close the 12-point gap as the first quarter finished 27-16 in favor of the Rams.

The second quarter was more of the same, with the Rams extending their lead to as much as 16 points, shooting 62% from the floor on the night compared to Buffalo’s 42%. Rhode Island went into the half with a 42-28 lead.

A second-half surge from Buffalo kept the Rams from running away with the game, but the Bulls could only slim the lead to ten before URI pulled away in the fourth quarter, coming out 71-56 winners. It was the Rams’ first win over Buffalo in program history.

Despite the 14-point win, Reiss wasn’t happy with her team’s defensive performance.

“We couldn’t guard my mother today,” Reiss said. “We could never put them away because we were not disciplined. Even though we had a good start, after they punched back and climbed their way back into the game, we never got into any kind of rhythm.”

Thursday’s game was a night to remember for sophomore Sophie Phillips, who shot 5-for-8 from beyond the arc for a team-high 15 points. Reiss had high praise for Phillips, who barely saw any playing time last season.

“Her transformation has been remarkable,” Reiss said. “She’s gradually getting more and more time, but that’s a credit to her as a player. She put in so much work this offseason to be ready.”

It was more of the same on Sunday for Tammi Reiss and her squad, as they returned to the Ryan Center and fought to a 63-43 win vs. the University of Maine.

Reiss had called for a tighter defensive performance on Thursday, and her team responded. They limited Maine to only a 29% field goal percentage on the night, as the Black Bears went 0-for-9 in the first eight minutes and 1-for-12 through the first quarter. In similar fashion to Thursday, Rhode Island stormed to an early 9-0 lead, including five points off Maine turnovers.

“I’m extremely pleased with our defensive effort today,” Reiss said. “It was a different team with a different energy [from Buffalo]. Right from the jump, Say [Lassiter] gets a steal and that sets a tone for the rest of the game. And that was the game, our defense. Period.”

The Rams eventually ended the first quarter with a 15-4 lead, never letting Maine find their way back into the contest. Maine were eventually able to slim the lead to 10 in the third quarter after trailing 27-16 at halftime, but an 8-2 run from Rams ensured that they went into the final quarter with a 16 point lead.

Rhode Island had never been outscored in the fourth quarter in the first seven games of the season, and that continued on Sunday. The Rams outscored the Black Bears 15-11 in the final 10 minutes, growing their lead to as much as 22 before eventually winning 63-43.

The win was a full team performance. Rhode Island’s bench scored 15 of the 29 first-half points, and 11 of the 12 Rams who saw action scored.

Junior Mayé Touré led the way with 13 points and eight rebounds. Lassiter wasn’t far behind with 11 points and a career-high 5 steals.

“We really honed in on defense after the Buffalo game,” Lassiter said. “It starts with me at the point and being able to pressure the ball, and that sets the tone for the rest of us. Getting that start really lifted us as a team throughout the game to hold them to 43 [points].”

For Reiss, the difference from her team’s defensive performance against Buffalo was clear.

“Today, mom was getting no buckets,” Reiss said. “Mom was gonna have to work.”

The Rams would conclude their homestand with a 88-34 win vs. the University of Hartford, in front of almost 3,500 local elementary school students on the team’s annual “Education Day.”

Sophie Phillips and Emmi Rinat would combine for 44 points, scoring a career-best 21 and 23 points respectively. Lassiter dished out a career-best 11 assists, helping the team to a season-best 23 assist on 37 made field goals. Rhode Island’s depth would once again shine, with the bench scoring 55 of the team’s 88 points.

With the wins, Rhode Island improved to 8-1 on the season, extending their winning run to seven games and remaining unbeaten at home in six games this season. They’ll look to continue their streak on Sunday, as they are set to travel to Quinnipiac to kick off a three game road trip. Tip-off is scheduled for 12:00 p.m, with the radio call available on the Varsity App.