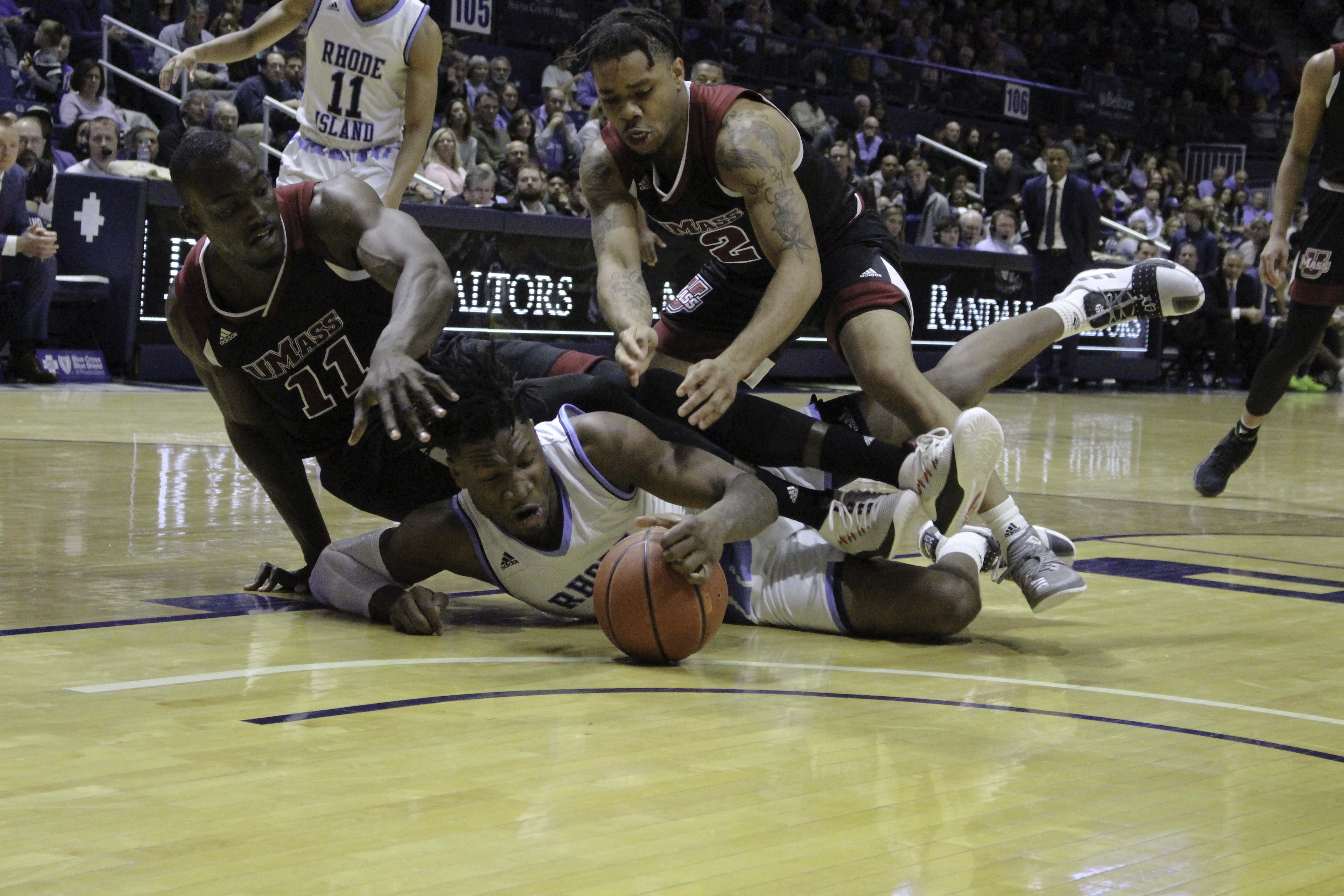 Junior Cyril Langevine hits the deck as he dives for the ball on Senior Day against UMass. Photo by James McIntosh.

The University of Rhode Island men’s basketball season came to a close this past Saturday as they lost to St. Bonaventure in the semifinals of the Atlantic 10 Championship. The Rams finished the season with an overall record of 18-15 and an A-10 record of 9-9.

The Rams came into the semifinal matchup with the Bonnies riding a six game win streak and fresh off the upset of number one seeded Virginia Commonwealth University. Looking to advance to the championship game for the third consecutive year, all that stood in the way was St. Bonaventure.

URI came out running as they opened up a lead as big as 15 points in the first half. After that is was all Bonnies as they went on a 13-0 run to close out the first half. The second half started the same way the first ended. St. Bonaventure owned the Rams in the second half as URI went nine minutes and 20 seconds without a basket. Any chance of a third straight NCAA tournament appearance ended as URI fell by a final of 68-51.

There won’t be another banner hanging in the Ryan Center next year and no rings will be handed out, but don’t be fooled. This season won’t be long remembered like years past, it won’t be celebrated but it was a very important and vital year. It was the year that proved David Cox was the right hire.

Go back to Tuesday, Feb. 19. URI traveled down to Richmond, Virginia to take on the VCU Rams. VCU, the powerhouse of the A-10, is never an easy place to play. Simply put, the Rams got run out of the gym and VCU didn’t break a sweat doing it. A final score of 76-42 was the worst loss of the season for URI and the low point of the year. It looked like the season was a lost cause and that it was time to look to the 2019-2020 season.

This wasn’t the case. Although the Rams would lose their next game at home to the Davidson Wildcats, URI basketball was alive again. The Rams turned that VCU loss into a turning point. URI would rattle off four straight wins including the upset of the Dayton Flyers.

The Rams of Rhode Island were playing their best basketball at the right time. URI played the La Salle Explorers to open up tournament play on Thursday. It was over from the start as URI easily defeated La Salle 76-57. Up next, the Rams of VCU. VCU came into the tournament as the number one seed and also Regular Season Atlantic 10 champions.

A season that didn’t yield any championships or an NCAA tournament berth is one that has seemingly become uncommon in Kingston in recent years. But this was a culture building season. Losing five seniors like URI did last year is tough for any college team not named Duke or Kentucky. The Rams had to replace nearly 80 percent of scoring from a year ago and their head coach who left for UConn. If a championship was brought home this year it would have been a welcomed surprise.

If you are a URI basketball fan you should be very excited for the next year. A year where everyone will be back except for Ryan Preston, Omar Silverio and Will Leviton. The Rams will have Cyril Langevine back who posted 17 double-doubles. Jeff Dowtin is back who had over 100 assists and averaged 15 points per contest. Oh yeah, Fatts Russell is coming back for his third year. The same Fatts that dropped 41 points against St. Joseph’s two weeks ago.

Most importantly, David Cox will be back. The man with the tough task of replacing Dan Hurley. Cox has done quite a job considering what he had to inherit. So good in fact he got named one of 12 national finalists for the 2019 Joe B. Hall Award, which is presented annually to the top first-year coach in Division I. Not too bad for your first year.

“I guess the next step is regrouping, getting our bodies together and getting back to work,” said Cox. “Because we fell short of our ultimate goal of winning another conference championship and getting to the NCAA tournament.”