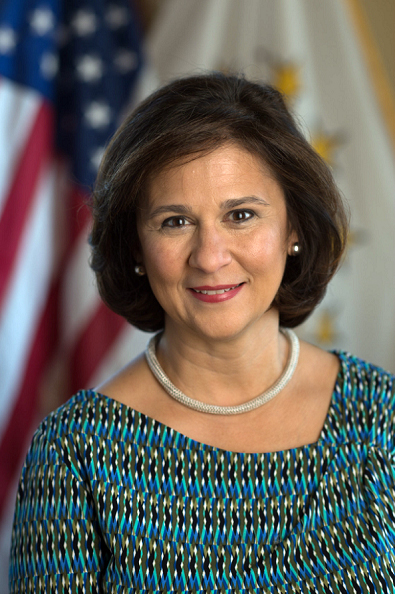 Rhode Island Secretary of State Nellie Gorbea discussed the 2020 election and the power of young voters during the final installment this semester’s “Long Rhode to Vote” lecture series.

In 2014, Gorbea became the first Hispanic woman elected to state office in New England when she was elected to serve as Rhode Island secretary of state. During her time in office, she has led the charge to replace outdated voting machines, helped Rhode Island acquire state-of-the-art paper ballots, implemented automatic voter registration and online voter registration and proposed legislation to increase government transparency, according to political science professor and event moderator Shanna Pearson-Merkowitz.

Gorbea told University of Rhode Island students, alumni and community members during her virtual lecture on Wednesday night that she believes this election was unlike any other.

“Through it all, I was focused on my core mission as secretary of state, which is to improve access to the ballot box while maintaining the integrity of every vote,” Gorbea said. “That’s really important because I think at times, those two items have been pitted against each other.”

Gorbea said she has always been an advocate for early, in-person voting, and said the efforts made by her office, the Rhode Island Board of Elections and local boards of canvassers helped 507,000 Rhode Islanders cast a ballot in the 2020 election, passing the previous record of 475,000 ballots casted in the 2008 general election. She said that the years of collaborative work of many Rhode Island offices, cities and towns are responsible for the record-shattering turnout.

“I can’t tell you how good it felt to not only see early, in-person voting become a law in Rhode Island this year, but for 150,000 people also to take advantage of it,” Gorbea said. “It was all really, really inspiring to see and a much needed light in the darkness that has been a lot of 2020.”

Decades of hard work and determination it took to turn it into a reality for most Americans were mentioned by Gorbea in commemoration of the 19th Amendment. She believes that while it is important to “honor the persistence and courage of the suffrage movement,” people should use all of the lessons learned from the women’s suffrage movement and the Voting Rights Act of 1965 to continue working towards a brighter future. She used the victory of Vice President-Elect Kamala Harris as an example.

“We have elected our first female, Black and Asian American vice president,” Gorbea said. “This election and the anniversary of the suffrage movement are landmark examples of how our democracy is always evolving, and democracy should always be evolving. Many of the structures that were put in place generations ago don’t make sense today.”

Gorbea also highlighted the number of women in general, as well as the number of women of color, elected on Nov. 3 to both Congress and within local government. Not counting this month’s election results, there are currently 1,866 women serving in state legislatures. In Rhode Island, 27 out of the 75 Representatives in the House are women.

Gorbea also noted the 33 Hispanic elected officials throughout the state, more than half of which are women. Yet, Gorbea said we still have a ways to go.

“That’s what can happen when our democracy keeps evolving to truly represent the people,” she said. “We still, until this year, had a ways to go in really making the right to vote universally available through our election systems, but we’ve made some progress. And I’m really proud to have been part of that this year.”

Gobrea’s call to young voters consisted of pushes to join community groups, to serve on boards and commissions and to join in on conversations with people you disagree with.

She said she believes democracy will be stronger with the voice of the youth present, and that it is never too late to engage with others to make a difference.

Gorbea said she remains “cautiously optimistic” at the seemingly changing tide in government and called the United States a country that “in many ways, defies many odds.”

“None of us have the truth in its absolute,” Gorbea said. “Listen with care and with humanity in mind to those you might not necessarily see eye to eye with. I know your generation is up to the task.”