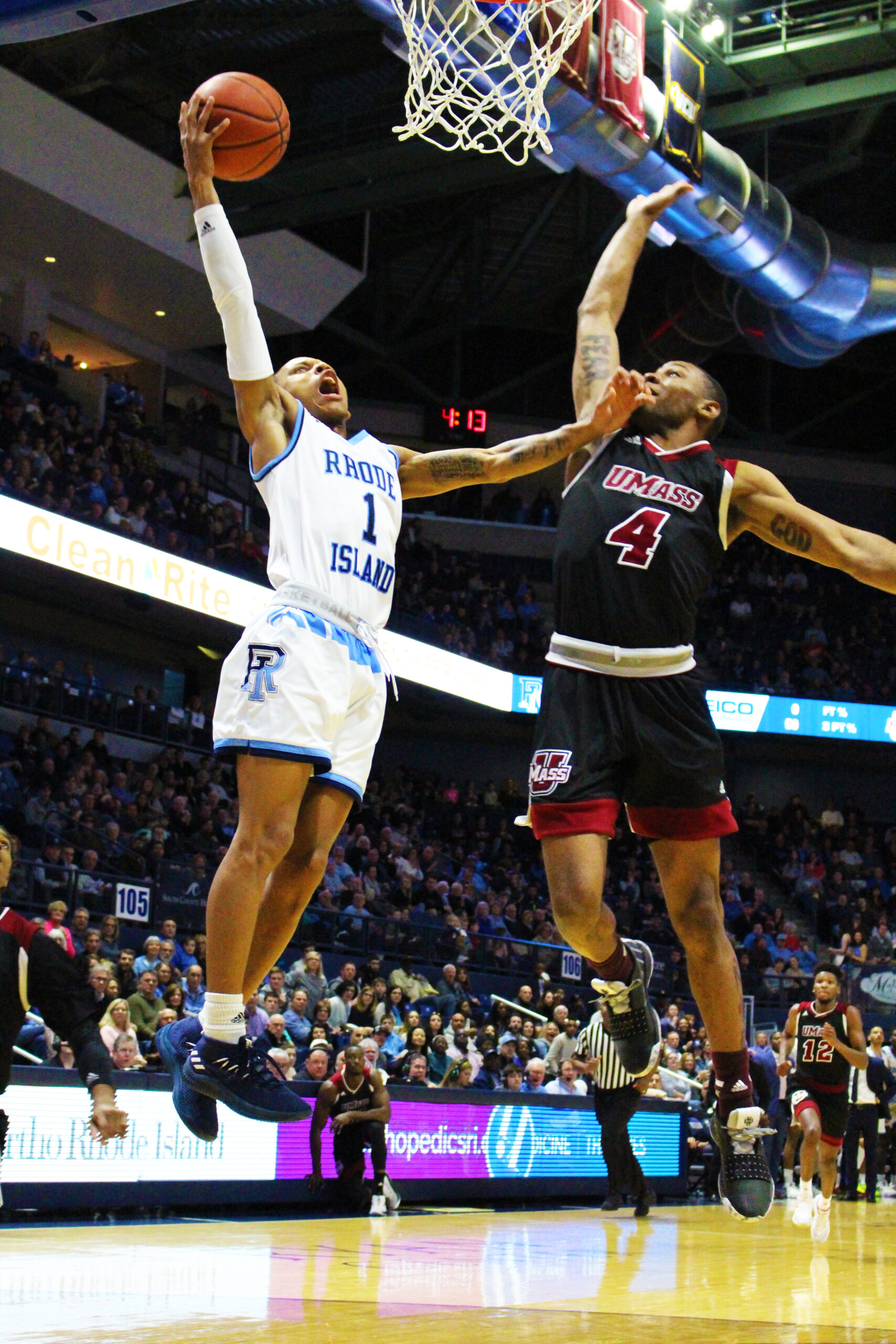 Fatts Russell makes a shot against UMass during a game last season. Photo by James McIntosh.

Their season will tip off next Wednesday, Nov. 25 vs. Stephen F. Austin University after months of uncertainty surrounding the start date. The NCAA ruled in September that men’s and women’s college basketball can start playing this day.

The Rams have not been on the court since the regular season finale against the University of Massachusetts last March. Their season was cancelled, along with the rest of the college basketball world, one week later. Rhody was set to tip off on Friday, March 13, but the conference tournament was suspended indefinitely a day prior.

Speaking at the team’s virtual media day held last Thursday, Head Coach David Cox reflected on the time between the cancellation and the present day.

There will be many new faces for the Rams this season, with only three players who saw minutes last season returning to the team. Jeff Dowtin and Cyril Langevine were lost to graduation, and the transfers of Tyrese Martin, Mehki Long and Jacob Toppin left the team with lots of newcomers filling up the roster.

They’ll be led by Fatts Russell, an Atlantic 10 Preseason All-Conference First Team member for the first time in his career. The senior point guard from Pennsylvania returned to Rhody after flirting with the NBA draft, and he is 745 points away from becoming the second Ram all-time to score 2,000 points in their career. Russell, who was named to the 2021 Bob Cousy Point Guard of the Year award watch list, is more concerned about the team aspect than individual accolades though.

“Winning is always at the top of my list and I feel like it should be at the top of anybody’s list,” Russell said about his priorities for the season. “Everybody will get rewards after we win, but [winning] is my main focus right now.”

Rhody will begin their season next week where they will play four games in five days at the Mohegan Sun Arena in Uncasville, Connecticut. They’ll take on Stephen F. Austin and Towson on back-to-back days before getting a rest day on Nov. 27. URI will then play the University of South Florida and Temple University over the weekend as part of the 2020 Air Force Reserve Basketball Hall of Fame Tip-Off.

The stretch is reminiscent of the AAU circuit, but Russell said the team’s comradery will help the Rams adjust to life in “Bubbleville.”

“It’s gonna be difficult to be in a place for that long, but we enjoy being with each other,” he said. “I feel like I am with my brothers whenever I am with [my teammates], so we should be fine in that regard.”

Teams like URI won’t have the ability to impress the NCAA Tournament Selection Committee as easily given the shortening of the non-conference season. Rhody lost games from their original schedule against Providence, Boise State and Marquette, with Coach Cox being vocal about this issue throughout the fall.

They were able to keep previously-scheduled road games against Boston College and Western Kentucky. Rhody will open their home slate of games against Seton Hall on Dec. 2, before playing an 18-game conference schedule from December to March.

Fortunately for the Rams and their conference rivals, the A-10 could be the best it has been in the last five years. Richmond and Saint Louis both received votes in the preseason AP Top 25 poll, and Dayton returns much of its roster (with a notable exception of All-American Obi Toppen) from a team that was a favorite to reach the 2020 Final Four. St. Bonaventure returns five players who started games last season, and Duquesne will look to continue its ascent after starting out 10-0 last year.

Rhody placed behind all those teams in the conference preseason poll released last week, with Cox saying the league has as many as five teams that could reach the NCAA Tournament. He also said their preseason position changes the dynamic for a group that is used to being seen as one of the top dogs in the A-10.

“The sixth place in the preseason poll allows us to focus on what our goals are for this year,” said Coach Cox. “We are now going to be hunters as opposed to perhaps the hunted as we have been in the past couple of years and we embrace that role.”

As for who will be out there for the opening tip-off come next week, Cox remained tight-lipped on the subject. Russell and Jeremy Sheppard are locked to start at the guard positions. Malik Martin, whose brother Hassan enjoyed a decorated career in Kingston, has a good chance to soak up minutes at the wing position.

Junior Jermaine Harris is the favorite to start at center given that he’s started every game since coming to Kingston. Harris and Antwan Walker, a redshirt-junior who joined the active roster midway through last year, seem poised for breakout seasons.

“Based on what I have seen over the past four months, both of those young men are ready to take huge, huge leaps,” Cox said.

The 2020-21 college basketball season will be a rollercoaster like never before, but if there is a season to be had, URI will be ready to make it back to the Big Dance for the first time since 2018.