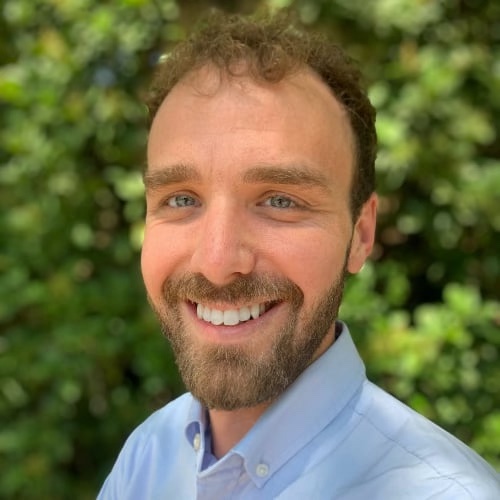 Writing and rhetoric and natural resources sciences professor Madison Jones combines his passions for writing and science in the classroom. PHOTO CREDIT: uri.edu

Madison Jones, an assistant professor of the writing and rhetoric and natural resources science departments at the University of Rhode Island, was the first person in his family in five generations to leave his home state of Alabama.

“I’ve always been drawn to the relationship between people and the natural world,” Jones said. “I think that’s rooted in some of my childhood experiences. As I went to school, I was very interested in both creative writing and literature, and then I began to develop a love of rhetoric. It’s a way I see human beings mediating their relationships to others and to the world around them. From there, I developed a love for environmental and science writing.”

He said he grew up surrounded by a love for writing and all things related to the outdoors.

“My grandfather was the writer in residence — he was a fiction writer — at Auburn University, so I grew up in a literary family,” Jones said. “My father wanted to be a poet but ended up becoming a wood-cutter and my mother was a teacher, so I grew up in this family environment with a lot of writing and literature but also time spent in nature. I grew up working on my grandfather’s farm and my dad cut trees.”

Jones’ NRS 568 class is specifically unique because, according to him, it combines the study of visual rhetoric to study how visual media on science and environmental advocacy is communicated to the public.

One of the reasons Jones is so passionate about what he studied and what he now teaches at URI is because, according to him, these topics all revolve around his favorite hobbies.

“I love being outdoors anyways,” said Jones. “I love camping, biking, kayaking [and] hiking. Those are my primary interests. But I love to read and to write. It’s funny because my job is sort of also all [of] my favorite pastimes too.”

Jones’s passion for what he teaches is not overlooked by his students. Hannah MacDonald, a second-year master’s student in Environmental Science and Management, took WRT 533 and NRS 568 online with Jones, but could still feel his passion through the screen.

“Dr. Jones made a community out of a virtual classroom by facilitating interactive conversations among peers on issues we were all interested in,” said MacDonald. “Logging into class was enjoyable as Dr. Jones made an effort to give every student a voice and give time for us to all engage with each other’s ideas around environmental rhetoric.”

Jones said that if there is one thing he hopes his students take away from his teaching, it’s the power of writing.

In his classes, Jones said that he tries to convey that writing is more than just words on a paper and goes beyond the basic techniques of grammar; it’s a creative practice that allows people to communicate, advocate and create.

Currently, Jones is working on a few personal projects creating apps that use augmented reality, or digital information being layered over images of the real world, as a form of public advocacy work. When he’s not teaching or working on his projects, Jones says his favorite part of URI’s campus is the Quad.

“Sometimes I will sit at the benches and think,” said Jones. “It’s a nice place to sit and think on a warm summer day.”