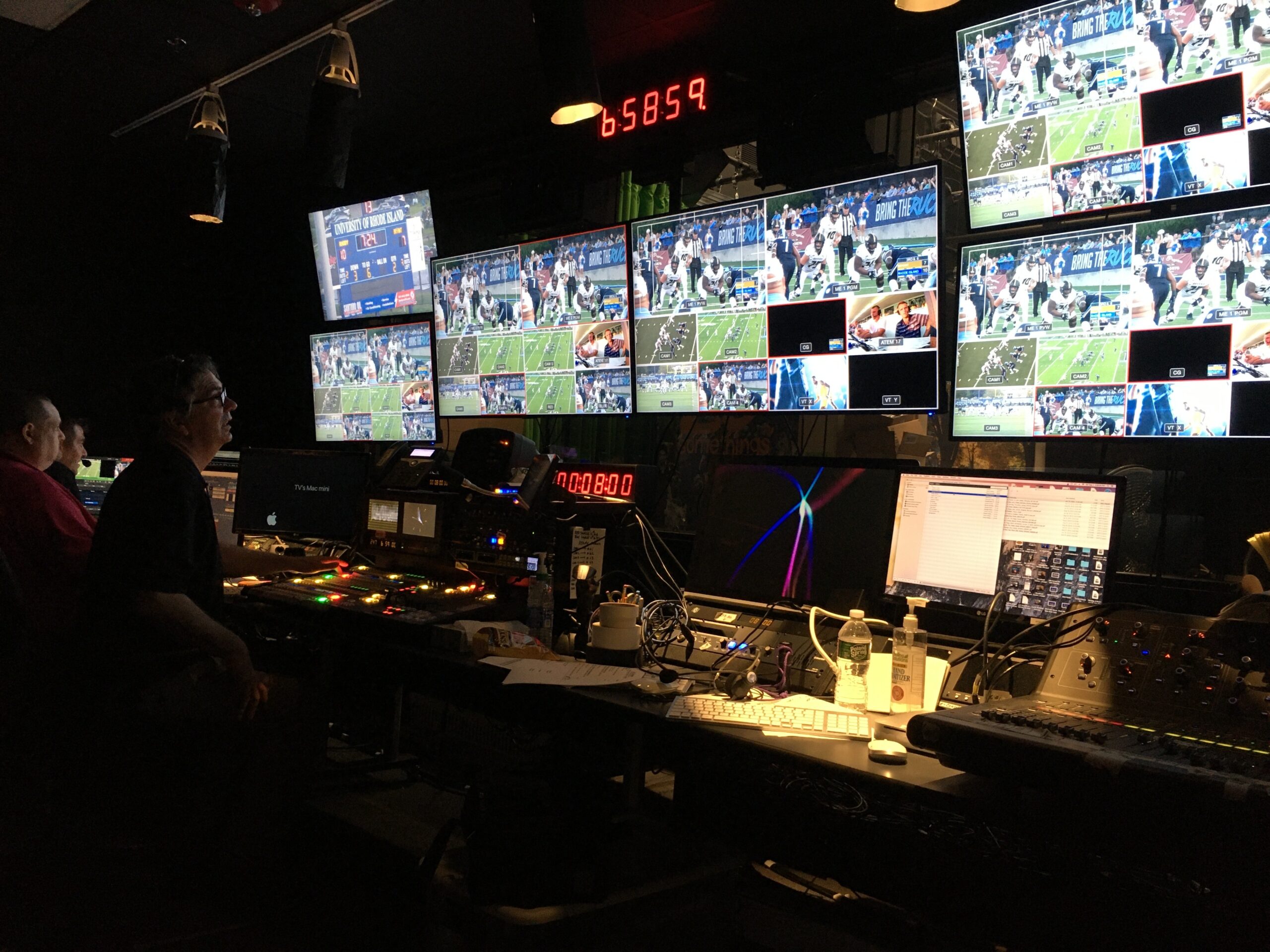 School to provide on, off air talent for ESPN+ broadcasts

Students will now have the opportunity to work games inside the state-of-the-art broadcast center. Photo Credit: Harrington School of Communication and Media

Students at the University of Rhode Island Harrington School of Communication and Media will now have the chance to have their work streamed across the nation.

This academic year, the Harrington School partnered with the athletic department to allow students to run broadcasts of URI sporting events and have them aired on ESPN+. Previously, the school worked with Cox Media and Yurview. While some games will still air on that channel, the games will now reach a much wider audience on the popular Disney-owned streaming service.

This development comes from a deal that ESPN had with the Atlantic 10 Conference about three or four years ago. However, according to Athletic Director Thorr Bjorn, URI did not have the infrastructure to meet the demands of the agreement.

He realized quickly that work needed to be done. This led him to former Harrington Chair Adam Roth.

“We put together a collaborative Budget Planning Council presentation to talk about bringing a person on board and making some investments strategically in terms of infrastructure,” Bjorn said.

Bjorn, a sports management graduate from the University of Massachusetts, described a cycle where the streams generate more ad revenue for the school, which in turn is reinvested into the program to improve infrastructure. It will give recruits and student athletes the ability to show games to family members, which in turn will make the athletics department grow.

There are several key players in implementing the necessary changes to make URI a prominent school for sports broadcasting. Bjorn said that John Watson will start teaching classes at the Harrington School, while Assistant Media Relations Director Shane Donaldson is in charge of the day-by-day operations. While Bjorn is the head of the athletic department as a whole, he views the project as a “whole collaborative” with College of Arts and Sciences Dean Jen Riley and new Harrington School Director Ammina Kothari.

Kothari said the deal “just made sense” as students will get the chance to work on real live events alongside professionals.

Among the skills that students would be gaining, according to Kothari, are camera handling, setting up shots, working in the control room, audio voice overs, video and audio cuts and adding text to footage. Bjorn hopes these skills will combine to produce great results.

“Our hope is that eventually students will start being able to produce commercials, content vignettes, writing storylines and more,” he said.”It helps brand the Harrington School by saying here’s some great things that URI is offering. Come think about us as an institution.”

Another key part of the broadcast would be play-by-play commentary, a field that Stone Freeman ’19, is well-versed in. He received the 2019 Academic Award for Excellence in Journalism and has been heavily involved in play-by-play in the new agreement.

Freeman believes the new arrangement will solve a problem that many freshmen experience.

“Freshmen a lot of times are afraid to get their feet wet,” Freeman said. “They think, ‘I’ve never done this before, I will probably mess it up.’ The first time is always the hardest, the second time it’s a little better. By the fourth time, you think you’ve got it, but then in the fifth something goes wrong and you rethink everything. I’m doing this as a professional and I still mess up. You always work to get better and make progress.”

He described the vast difference between URI’s broadcast capabilities as recently as two years ago, and what they are now.

“My last year, when we did women’s basketball, we plugged a microphone into a camera and that was it,” Freeman said.

A recent article in The Good Five Cent Cigar reported that URI ranked last in the Atlantic 10 in ability to put a broadcast on ESPN. Freeman believes that the Harrington deal will change everything and make that statistic obsolete.

“This now overhauls our program and gives us the chance to be one of the best schools for developing talent in the conference, if not the whole country,” he said.

Freeman also pointed out that the deal will also make students involved in broadcasting more well versed in a variety of sports, while spreading popularity of lesser known sports.

The agreement puts URI in a rare position, according to Kothari. She said that most schools do not have their games broadcast by their own programs.

She argues that Harrington students should not be the only ones excited about the upgrade.

“[It’s] great for the Harrington School, but also for the University as a whole as well because it showcases the potential of our students,” Kothari said.