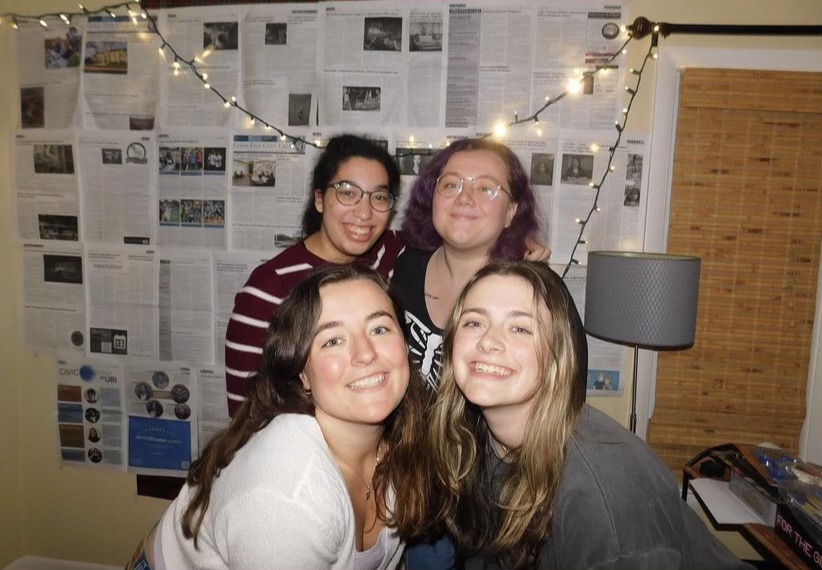 When I moved on from the position of entertainment editor at the end of last semester, the editors I had started with were all publishing their own goodbye columns. I decided to hold off until the very last minute, which is now.

I did that for two reasons. One, I knew that I’d be writing again this semester (I had to hit my 150 articles goal!). Two, I wasn’t ready and didn’t know what to write. Well, over five months later, I’m still not ready and I still don’t know what to say, but the time has come. Sorry, but you’ll just have to settle for my attempt.

In the speech I gave that got me elected as a staff reporter going into my sophomore year, my voice was wobbling with emotion and nerves. I ended it by saying, “The Good Five Cent Cigar is the first organization I joined here and it’s going to be the last one I leave. Thank you.” I wasn’t just saying it to get the vote, The Cigar was the first organization I joined and the last one I’ll be leaving–I actually have one more article that will be published online after this paper comes out.

I first visited the University of Rhode Island, and the state itself for the Multicultural Overnight Program in April 2018 after I had already been an accepted student. It was snowing, I was tired, URI was barely a factor on the list of schools I’d been accepted to and I didn’t want to sleep on the floor of some random dorm room. I wanted to go home from the minute we began the journey from New York. I ended up falling in love with the school on that trip.

That night, as I stayed up late talking with Alex Obiurka, the sophomore that was hosting me in her dorm room, she told me that I should join The Good Five Cent Cigar since I was planning on majoring in journalism. I thought the name was odd so it stuck with me. When Professor John Pantalone mentioned the organization on the first day of my first journalism class, I remembered what Alex said and knew I had to be in attendance for the upcoming first meeting.

I sat on a couch in a crowded room of the Memorial Union basement and smiled to myself when the entertainment editor introduced herself to everyone as Kayla Michaud. When she pitched a story about theatre and I raised my hand to take it, she asked what my name was and I said, “I’m also Kayla.” The rest, as they say, is history.

I have so many people to thank but perhaps none as much as that Other Kayla; the first, yet not one and only, Kayla. Thank you so much for always supporting me. From that very first day, I wanted nothing more than to impress you. Eventually, I wanted to maybe even sit in your spot. It was a privilege and an honor to follow in your footsteps. I would say that I hope I’ve made you proud but that would be silly because you’ve never failed to tell me how proud you are of me. Obviously, those words have always meant the world to me. Thank you.

It’s well-known among Cigar folks that staff reporter is one of the hardest jobs in the paper. So thank you to Jason Phillips and Abbie Judson for making my year in the role fun. I’ll always cherish the memories of sitting together at every Monday night meeting.

The thing I was most nervous about when I became entertainment editor was being able to fill a section. Thank you Ronan Himelrick, Evan McAlice, Morgan Maleonskie, Leah Popovic, Liz Fusco, David Broccoli, Christian Silvia, Juliana Lepore and so many more for your consistent, entertaining contributions. It was a joy to edit your work and, hopefully, help you grow. A special shoutout to Leah Crowley for an iconic K-pop article, amazing dance moves and a willingness to listen to me ramble about women’s gymnastics.

Along with editing for the entertainment section, I got to learn a lot about sports and its own special brand of AP Style as well. Thank you Will Pipicelli and Aniekan Okon for being my editing partners and for your patience as I tried to remember whether or not we capitalize “team.”

I’m lucky in that my roommates also happen to be the best photographers in the game–I may be biased but I’m also right. Greg Clark and Melissa Marchese, you’re stuck with me for life, sorry.

There are three people who wrote goodbye columns last semester when I wasn’t ready and I cannot thank them enough. Kate LeBlanc, you were, and are, an amazing leader. I loved being the KLL to your KL on the spreadsheet. Mary Lind, you are an absolute superhuman who is always doing a million things at once. Still, you manage to be an amazing friend. Nicole Wagner, your passion is admirable and palpable. There are few people that I laugh as hard with as I do with you. Thank you all.

I could fill a whole paper writing about all the other people I have to thank, so I’m just going to list who I can for the sake of space. Theresa Brown. Laura Weick. Ian Weiner. Andy Main. Julia Moro. Lianna Blakeman. Siobhan Richards. Imani Fleming. Adam Zangari. James Singer. Thank you.

Lastly, thank you to anyone at URI who has ever had any part in any entertainment event on this campus; from music convocations to concerts to movie nights to theatre performances. You’ve truly made my four years and given me so much to write about.

Turns out that even though I wasn’t sure what to say, I still had a lot to say. This will come as no surprise to all of you who have read my articles, or maybe even had to edit them. I’ve never been good with conclusions. I’ll just take my cue and exit stage left.