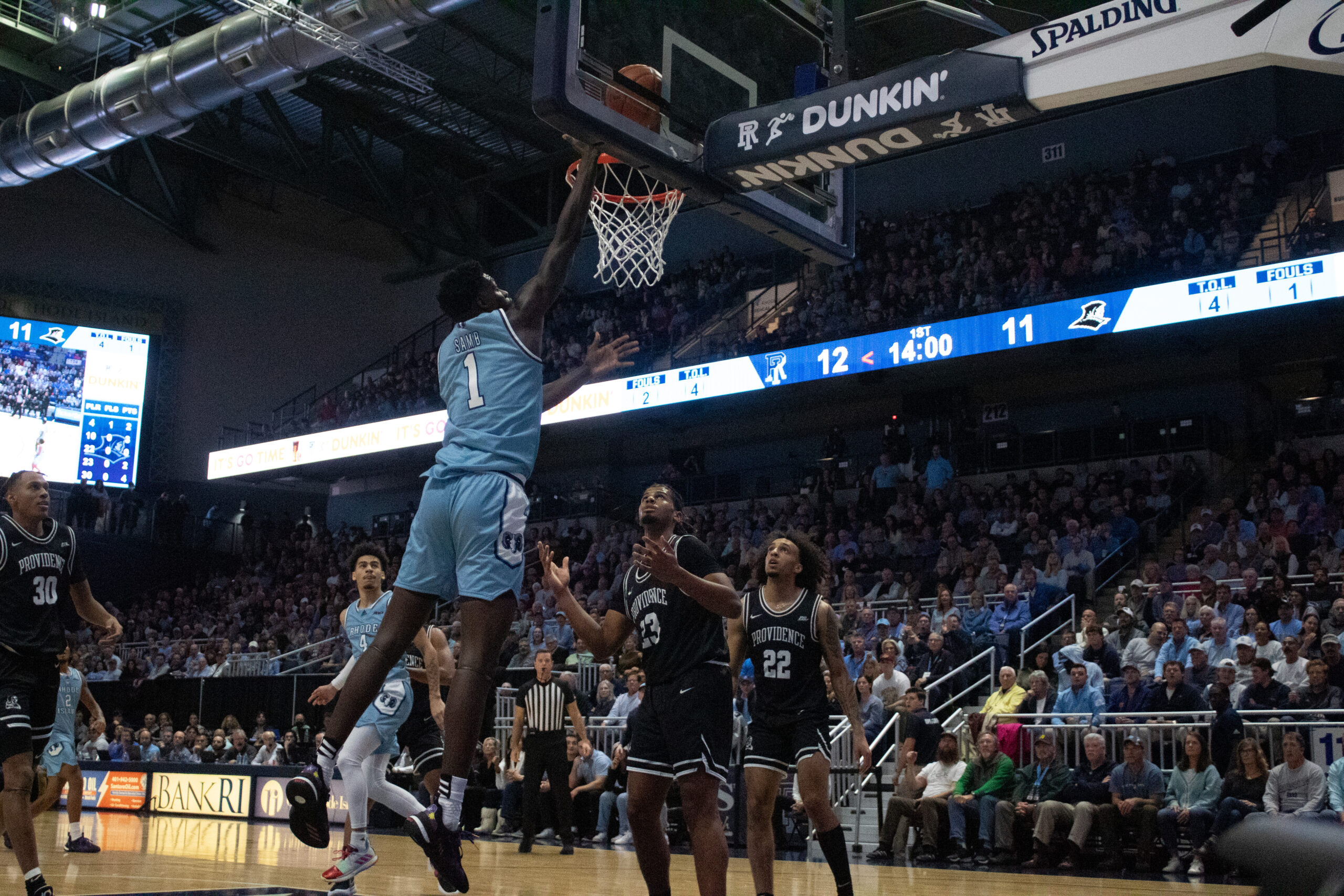 Abdou Samb finished with 14 points on 6-7 shooting from the field against the Friars. PHOTO CREDIT: Aidan Cahill

The state of Rhode Island is small in the majority of aspects. However, that does not stop it from holding one of the biggest college basketball games of the year between URI and Providence College.

The 132nd installment of the bitter rivalry attracted a sold-out crowd in the Ryan Center, even featuring NBA stars Kyle Lowry and Jimmy Butler. However, even with all of the home crowd support, Rhode Island was not able to come out victorious, dropping the contest 88-74.

The first half saw Rhody playing off of the energy of their home crowd. Malik Martin opened up the scoring with an and-one basket, erupting the Ryan Center. However, Noah Locke returned the favor with a three of his own for PC to tie the game quickly.

The back-and-forth play continued throughout the following minutes, with Rhode Island holding a 19-18 lead at the midway mark of the first half. However, an Alyn Breed layup gave Providence the advantage for the first time, 20-19.

The two squads still battled back and forth for a few minutes to follow. A Locke three gave Providence their first lead of more than one possession, and a Martin turnover for Rhode Island allowed Providence to extend that lead to 35-27.

The Friars would continue on their dominant path to shut out URI for the rest of the first half, going into the locker room with a 43-27 lead.

The second half was a drastic improvement for Rhode Island, beginning with an Ishmael Leggett three-pointer just 10 seconds in to shrink the lead to eight.

The rivals then traded baskets for a brief period before two consecutive possessions yielded positive results for Providence, granting them a 49-32 lead. However, two Brayon Freeman baskets within a minute of one another slowed Providence’s momentum and allowed Rhody to settle back into the game.

Over the next four minutes, Josaphat Bilau dropped seven points to whittle the Providence lead down to 13, with them still leading 60-47.

However, Providence held strong for the remainder of the game, only allowing their lead to drop down to 11 at its lowest point, rewarding them with a decisive victory.

Despite the loss, Rhode Island had several points to be proud of in the contest. The second half saw them with the scoring advantage, beating the Friars by two in the final 20 minutes.

Secondly, their 74 offensive points tied their second-highest on the year, a sigh of relief after a tough sub-50 point outing against Boston College. Finally, both Abdou Samb and Bilau recorded career highs in points, Samb with 14 and Bilau with 16.

After the loss, Archie Miller addressed the media, disappointed by the loss but still in awe of the turnout from the home fans.

Ed Cooley also credited the Rhody faithful following the contest, saying the atmosphere was a huge hurdle to overcome.

“The crowd down here is incredible,” Cooley said. “It’s always exciting to play down here. With crowds like that, you’re down eight before you get off the bus.”

However, another Rhode Island rivalry was to follow, Wednesday night when the Rams hosted Brown. The contest saw Rhode Island take a heartbreaking 59-58 loss.

Rhode Island held the lead for the entirety of the game up until within the final minute when Kimo Ferrari sank a three-point basket to give the Bears their first lead of the game.

Ishmael Leggett and Brayon Freeman lead the Rams with 14 points each. Malik Martin scored 13, as well as recorded his 500th career rebound.

Postgame, Miller was disappointed, not in his team, but in himself.

“Our team now is not a well-coached team,” Miller said. “The players want to do well, and right now, the coach isn’t doing his job.”

Following the loss, URI continues its homestand on Saturday when they host Army. Tip-Off is set for 2 p.m.