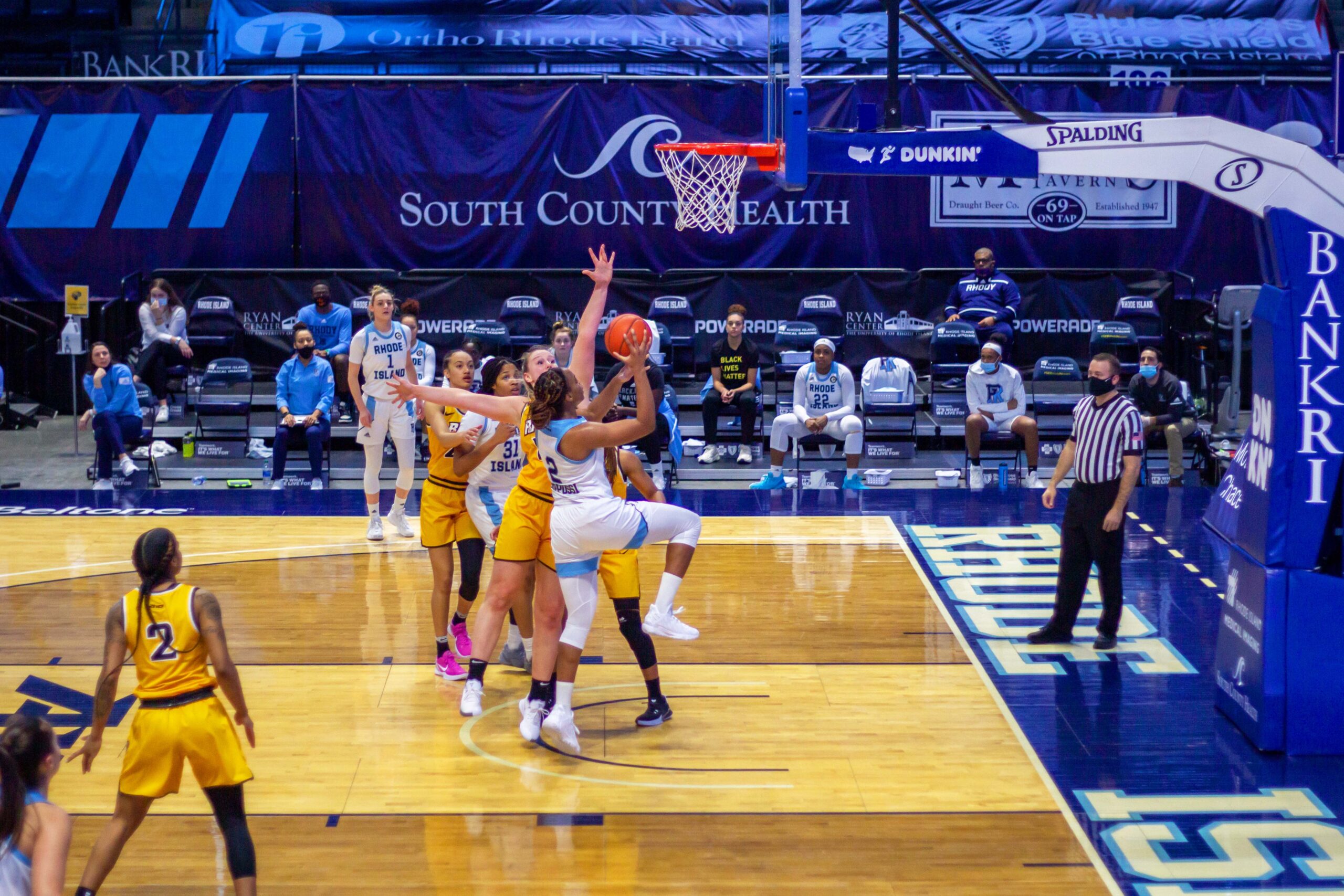 Marie-Paule Foppossi had a career day for URI, scoring 32 points against VCU. Photo by Greg Clark.

The best regular season in 25 years for the University of Rhode Island Women’s Basketball team culminated in the Rams finishing fourth in the Atlantic 10 after a historic win over Virginia Commonwealth University, with Rhody looking the type of team no one would want to play in postseason.

Sunday’s 87-68 beatdown over VCU was the perfect illustration of a squad who is playing their best basketball of the season at the right time. URI has won 11 out of its last 15 games, including seven straight home wins. In addition to earning a double-bye for the first time this century for the A-10 tournament, the Rams overcame VCU for the first time in program history.

Head Coach Tammi Reiss let out a thunderous roar heading into the locker room after the team’s winning effort, and based off her postgame comments, it was easy to see why.

“I’ve never been more proud and happier of the team,” she said. “That’s the best since I have been coaching here that we have ever played for 40 minutes, both offensively and defensively. That is a testament to our players.”

Rhode Island was dynamite on offense all afternoon, with their 87 points being a season-high. The home team also shot 68.6 percent from the field, the second-best single game effort in program history, and the most the Rams have ever done in the Ryan Center.

URI was led by the efforts of redshirt sophomore Marie-Paule Foppossi, who scored a career-high 32 points on 12-16 shooting from the field. She also had six assists in the contest, another career best. The Syracuse transfer has scored at least 15 points in each of her past three games, and her performance against VCU along with Friday’s win over Richmond earned her A-10 Player of the Week honors.

“She’s in her stride right now,” Coach Reiss said on Foppossi. “[That’s] no surprise to us and our coaching staff because she is very good. She is getting healthier and healthier, and now she is hitting her stride at the right time. She was phenomenal.”

Redshirt junior Emmanuelle Tahane had 25 points for URI, and Marta Vargas had all 15 of her points in the first half. Junior Taya Robinson had 18 points for the visitors on a day where Rhode Island honored graduate student Johanna Muzet as the team’s lone senior as part of Senior Day festivities.

Sunday’s win was just the latest chapter of what has been a historic season for URI. Their conference record of 11-7 resulted in the second most wins in conference play since the 1995-96 season, and just the third time overall Rhode Island has finished with a winning mark in A-10 play.

Making history was the expectation heading into the season for URI, and Coach Reiss said that message has been relayed all year long.

“I told this group that they’re gonna be the first of a lot of things,” she said. “That’s where you leave your legacy. You’re the first to do something. I’m so happy for the players, because they get to say another first in program history, and that’s all them.”

Rhode Island will not be playing any more games before they travel to Richmond for the conference tournament. The team will have an extended break, with Rhody’s first game not tipping off until Friday, March 11, at 2 p.m. Coach Reiss said her and her staff will be initially giving the team a few days of recovery before ramping work back up to avoid coming out flat in the postseason.

“We just came off a 10-game layoff, so the key for this is really keeping them fresh,” she said about her players. “We can’t bubble-wrap them, they can get injured at any time, but we need to keep our crispness.”

In just year two, Coach Reiss and her staff have the Rams elevating their goals to heights not seen before in program history. Next week in Richmond, they’ll have a chance to prove if they can become the first team in program history to win an A-10 postseason championship.