Even though Division I sports at the University of Rhode Island only started eight days ago, the back pages of The Good Five-Cent Cigar have been covering sports and sport organizations from every angle for the last 13 weeks.

As of Dec. 3, we will have published 59 stories over those 13 weeks, with a minimum of four being published since our first paper dropped in mid-September. The pandemic obviously limited our ability to write game previews and recaps, as there simply were no games to cover. Football got pushed to the spring, men’s and women’s basketball started last week and other Division I and club sports games are still on hold. Even still, our talented team, made up of myself and eight other reporters, worked throughout this unprecedented sports drought to continue to tell stories.

A point of emphasis of mine as the editor of this section was to increase the diversity of the stories we tell. Not only was that and still is needed on a moral and ethical level, but it also allowed us to tell stories that we have never explored previously. As writers we have gained a lot of knowledge through this, but also, and more importantly, so have the readers. 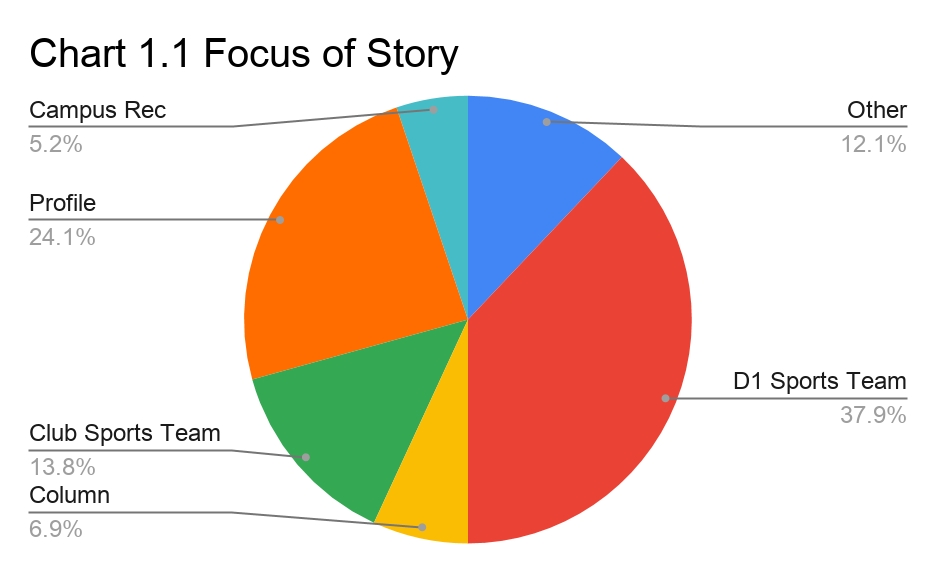 The chart on the left (Chart 1.1) offers a visual representation of the focus on our stories. Division I sports stories were about team previews and storylines about respective teams and sports.

Our profiles featured current and former Division I athletes and coaches across more than half of our teams on campus, as well as two profiles of behind-the-scenes people in the athletic department (Kelli Kidd and Brian Boesch).

Club sports teams are a big part of the campus community at the University, and the Cigar made sure their stories were told. We featured stories on 10 different teams, ranging from the equestrian team, women’s club soccer and club baseball.

Columns like this one have been scattered throughout the year, along with stories featuring the campus recreation department; intramural sports still happened, and the gyms were open to students to use.

Other stories that didn’t fit any particular category were explored, including all student-athletes being registered to vote before Election Day; a profile on eXposure, a multicultural, co-ed organization that works to bring people together through dance; the new basketball team the Providence Pirates, and more.

This next chart (Chart 1.2) is a breakdown of stories about or featuring our Division I sports teams. All 16 teams are represented, as men’s and women’s cross country were added in with their respective track and field teams. 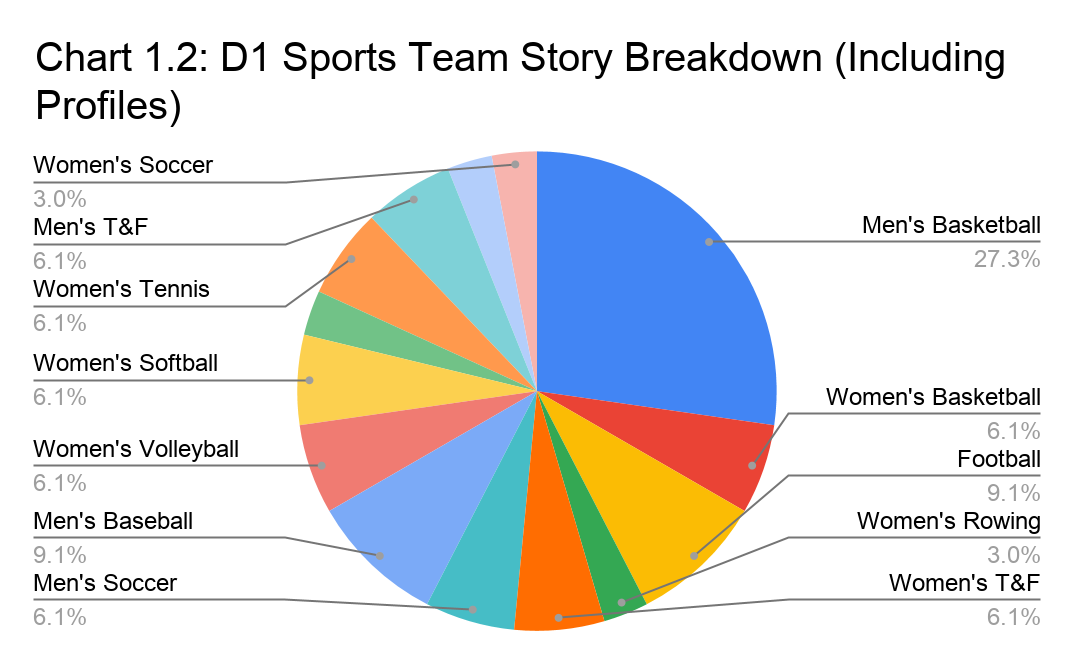 Men’s basketball got coverage more than anyone else, but there are a few reasons for that. One is that men’s basketball is the most popular sport among the students on campus, and a lot of other stories involving men’s basketball like non-conference schedules and Media Week were put into this category.

Still, 12 sports teams got more than one story written about them, whether that be a season preview for the women’s softball team, profiles on superstar student-athletes like Noeyla DeLaCruz, or even stories about past alumnus like Stavros Zarokostas, we were able to tell a multitude of stories. 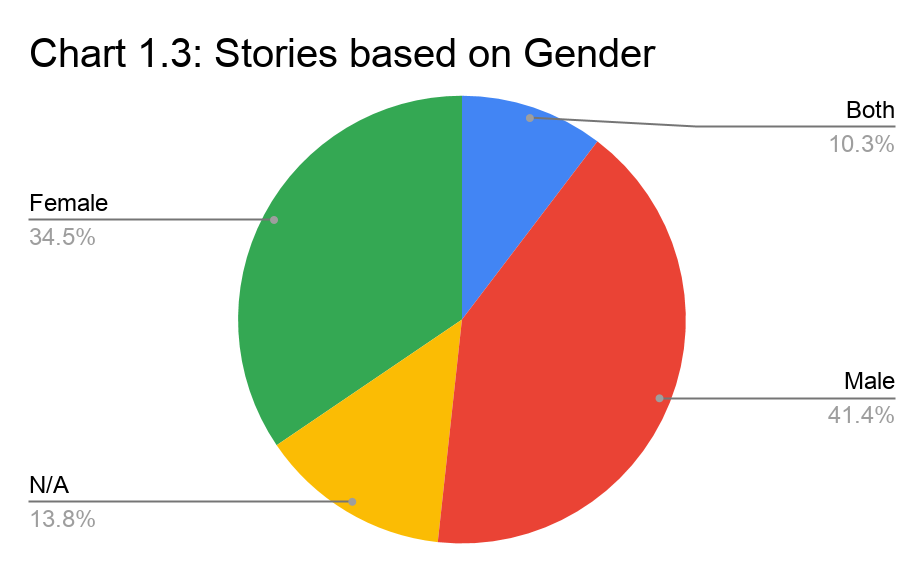 Lastly, the chart on the left (Chart 1.3) shows the almost equal coverage of the stories broken down by gender. For this data mark, a story was based on one of the four categories based on the subject of the story.

For example, a story like the profile on sports media student Kevin Wehner would fall under the male category, while a story on the tremendous twins on the women’s tennis team would be in the female category. Our recent story on the club rugby teams preparing for the season would fall in the section where both the male and female genders were featured, and stories like previous columns of mine would be in the yellow section.

As the calendar turns into the new year and we can (thankfully) put 2020 behind us, the Cigar will continue to tell diverse and unique stories for the next few months. We’re only halfway done, and many more words are still to be written in this topsy-turvy academic year.